The default portfolio choice for investors from the 1970s onward is the 60 stock/40 bond portfolio. Back when bond yields were high and earnings multiples were lower for the S&P 500, this meant you could get returns around 9-10 percent with a level of volatility that most investors were comfortable with. Ray Dalio's Bridgewater Associates (and later other sophisticated hedge funds) found through statistical research that an even better approach was to leverage US Treasury notes so that the volatility from the bond portion of the portfolio and the stock portion of the portfolio had roughly equal volatility (Bridgewater historically earned roughly 15-18 percent returns for the same level of volatility as 60/40 portfolios, before management fees). This approach is known as risk parity and is usually combined with strategic investments in commodities and credit to balance the portfolio further.

Risk Parity: Too Good to Last

When I started writing about risk parity in late 2018, it was a no-brainer. Take positions in the S&P 500 (SPY) and 5- and 10-year Treasury notes through futures yielding over 3 percent both financed by cash at a little over 2 percent and whichever way the economy went, you would be relatively balanced and could expect a positive return. If the economy heated up, stocks would likely keep surging, and if the economy cooled off, the Fed would be likely to cut rates, creating a nice profit for the Treasury position. Both positions had positive carry, positive real yield, and positive roll-down (via earnings increases for stocks and yield rolldown for bonds). I was so excited about the idea that I took an afternoon from my vacation in Cabo San Lucas to write about the concepts, complete with hand-drawn graphs outlining the portfolio theory. For the few people who read the article and fewer who made the trade outlined in that article and later articles, the results were exactly as advertised by the theory but even better.

The problem now is that the trade worked too well, meaning prices are now too high. 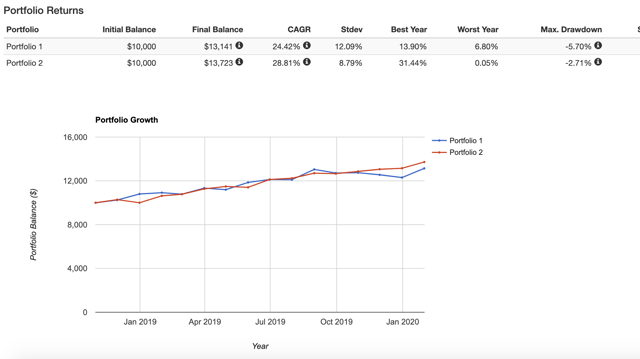 The leveraged Treasury trade by itself returned 24 percent annualized in the 18 months since, and the 50/50 stock-bond risk parity trade it was meant to be combined with returned a little less than 29 percent annualized with a maximum monthly drawdown of 2.7 percent. Both of these numbers crushed the S&P 500, which promptly sold off after I wrote the article and spent much of 2019 recovering.

I thought people should take profits on Treasuries when the 10-year dipped below 2 percent this summer, and now I think the party is close to being over, meaning that my models do not support having large positions in US Treasuries. Risk parity is a brilliant idea when the asset pricing setup works, but the combination of Treasury yields being below inflation (poor value) and below cash rates (negative carry) make me think twice about wanting to be in the trade.

This actually isn't the first time a setup like this has been imminent and bond yields have been unsustainably low. In fact, it has happened 3 times, in 2009 after the financial crisis, in late 2012 before the 2013 taper tantrum forced a repricing of intermediate-term government bonds, and in 2016 after Brexit. In every case, yields made no sense given economic conditions and returned to more normal levels in 12-18 months.

Players in the market without a fundamental understanding of why risk parity works could be asking for trouble if the yield curve steepens. Even if they're right, in many cases, they won't make that much money unless the Fed bends over backwards to cut rates. Right now, the market is pricing 25 to 40 basis points of cuts in 2020, which is fully priced into Treasury yields. The problem is that it might be irresponsible for the Fed to cut rates more with inflation running over 2 percent and relatively little stress in the financial markets, and they know this.

In the worlds of AQR's Cliff Asness, "Bonds Are Frickin' Expensive."

Readers need to understand that they're not going to get rich off of 4.5 percent real returns.

Asset prices are simply too high at the moment to get a decent yield from 60/40 portfolios. I don't think equity prices are way too high right now like they were in 2000, but that bonds' yields are too low. This makes sense given that central banks have taken unprecedented steps to manipulate yields but have not interfered in the same way in stocks.

Institutions are going to have problems also, as 4.5 percent real returns are not enough to fund many of their liabilities.

Risk parity isn't much better at this point with the 10-year below 1.5 percent and the 5-year at 1.3 percent. Are you going to go 50 percent stocks and 150 percent 5-year Treasury notes when you know bonds are not going to beat inflation and that you have negative carry? The yield curve is flat and inverted, so picking up yield rolldown won't save you. Risk parity is a good framework to trade with, and Treasuries are still useful as a hedge, but make no mistake, you're not going to get rich buying 5-year Treasury notes at 1.3 percent. Intelligent risk parity portfolios also can make money off of long/short factor investing, temporal arbitrage/dynamic volatility targeting, and commodity investing, but US Treasury real yield and positive carry are the engine that drives much of the returns of risk parity portfolios.

So, here we are. In December 2018, the world was full of opportunities. Now in February 2020, the financial markets don't look so appealing. While you can use research to identify better opportunities in segments of the market such as low volatility stocks and high dividend/value stocks, the edges are likely to be in the range of 1-2 percent per year rather than 10+ percent unless you're willing to lever.

Investors have three choices if they want to earn higher than the 6.5 percent per year that markets are likely to give them.

1. The first choice is concentration of equity risk. That means going 75, 80, maybe 90 percent equities. There's nothing inherently wrong with doing this, but it exposes you to the risk that your net worth could shrink 40+ percent in a recession and limits your ability to diversify. For high-net-worth investors and long-term 401(k) investors with 20+ year time frames, this is probably the easiest way to reach their goals. All long term investors have to do if they want to increase concentration is to not rebalance stocks into bonds and invest new money in stocks. Also, if you want to take a capital gain in bonds and put it in stocks, right now is as good of a time as any to do so also.

2. The second choice is leverage. Research shows that leverage applied to diversified portfolios typically does better per unit of risk than concentrating risk in equities because it's a less popular approach. Leveraging a broadly diversified portfolio across asset classes including stocks, Treasuries, corporate credit, and commodities, typically does best. This is the approach that Bridgewater has taken historically. However, since bonds are so expensive right now, I don't think the market is giving much of a systematic advantage to risk parity over the concentration of equity risk. The problem with pure risk parity is that stocks are much cheaper than bonds are at the moment. One long/short fund I like that intelligently uses leverage on credit is PIMIX, run by Daniel Ivascyn at PIMCO.

If you like risk a lot, you can even combine equity concentration with leverage. This option works in practice and theory, but a lot of investors are going to be uncomfortable with the 60+ percent drawdowns that are bound to occur at that level of leverage.

3. The third option is illiquidity. This means investing in private equity deals, investment real estate, etc. This is inside baseball, however. If you're not connected to sources of high-quality deals and can throw in a few hundred thousand dollars minimum per deal, you're boxed out. The only real option that's available to the upper-middle class is to invest in rental real estate, which means the opportunity is highly local. If you're in San Francisco, Seattle, New York, or other cash flow deficient markets, then this option is not fully available to you in your local market. If you live in Texas or Florida, then you can make some money without having to hope for appreciation.

And if you have access to private equity deals that pencil in 20+ percent returns, then you might not need the stock market anyway. My long/short risk parity investment models used to indicate annual returns in the low 20s, but now indicate around 14-15 percent annual returns with roughly 12 percent volatility. That isn't as much of a slam dunk.

I think investors should be cautious about Treasuries and corporate bonds at this point and take profits where warranted. The valuations of a lot of individual stocks that I look at, such as Tesla (TSLA), Beyond Meat (BYND), Virgin Galactic (SPCE), certain consumer staples companies, and Dow stocks all look high. The last time the same stocks looked this high was 2018 before the market sold off 20 percent. I'm not going to call a bubble, but it's hard to ignore that certain segments of the market are priced very optimistically. The S&P 500 does seem reasonably priced even if it's on the high side of normal, however. For retirement portfolios, I would try to let your portfolio drift to 80-85 percent equities over time with a portion in low volatility equities through USMV and/or EFAV. Bond exposure can be attained via TLT since it at least has a positive carry. Option 2 will work superbly when new opportunities arise, but the way assets are priced, the edge over option 1 is minimal. If you have access and ability to execute option 3 and invest in private deals, then do so. What I do know is that 60/40 is not going to deliver the returns investors are expecting.

Did you enjoy this article? Follow me for future research updates!

Logan Kane
20.23K Followers
Author and entrepreneur. My articles typically cover macroeconomic trends, portfolio strategy, value investing, and behavioral finance. I like to profit from the biases and constraints of other investors. My work is available along with 1,000+ other authors by subscribing to Seeking Alpha Premium.You can read some more of my work here on my Substack.

Disclosure: I am/we are long SPY, MUB. I wrote this article myself, and it expresses my own opinions. I am not receiving compensation for it (other than from Seeking Alpha). I have no business relationship with any company whose stock is mentioned in this article.