Alaska Air (ALK) has been one of the most consistent US airlines when it comes to customer satisfaction. In 2019, J.D. Power gave Alaska Air 801 points in its customer-satisfaction study out of 1000 points available, making it one of the best legacy carriers to travel with. Despite this, the company’s stock has not been performing well since March 2017, after the management failed to quickly integrate Virgin America, which it acquired in 2016 for $2.6 billion, inside its own business structure. Nevertheless, last year the management has finally made all the necessary steps to ensure that the acquisition finally starts to payoff and since September 2019 the stock has started to appreciate in value.

By successfully integrating Virgin America, Alaska Air was able to establish a stronger presence on the West Coast, primarily in the Pacific North West region. At the same time, the company gained a number of competitive advantages that will help it create additional shareholder value in the foreseeable future. I opened a long position in Alaska Air back in November 2018 and my investment currently made me a tiny return in comparison to the S&P 500 return of 22%. However, I expect the growth to accelerate in the upcoming months and believe that now is a good time to acquire the company’s stock as it has a great upside at the current market price. 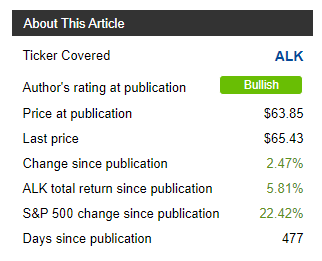 Without a doubt, the acquisition and later the integration of Virgin America has been at the top of the management’s agenda since late 2016. While the purchase helped the company to become the fifth-largest carrier inside the United States, its revenue per seat started to decline and the management didn’t have a clear understanding of what to do next. However, Alaska Air was able to achieve a strategic goal, which was even more important than the need to integrate Virgin America on time. The company prevented Jet Blue’s (JBLU) expansion into the West Coast market and as a result Jet Blue’s network slowly shrinks in the region, while Alaska is able to deliver top-line growth after years of struggling. If Alaska didn’t have enough financial resources during that time, then it’s very likely that Jet Blue would’ve bought Virgin itself for $2 billion and made it very hard for Alaska Air to succeed on the West Coast. That’s why as an investor of Alaska Air, I don’t mind if the company fails to grow its earnings for a number of quarters, as long as it continues to have enough competitive advantages that help it to create value in the long run.

When it comes to the company’s financials, Alaska has been making a lot of progress in the last few quarters. Its latest earnings report for FY19 shows that the company has made $798 million in net income, far above its FY18 net income of $554 million. What’s more impressive is that Alaska Air managed to accumulate around $1 billion in free cash flow in 2019 and had an FCF conversion rate of 133%. Such a great performance last year is a sign that things finally start to turn for the better and we should expect more growth in the foreseeable future.

Currently, Alaska Air shares are lagging behind the shares of Jet Blue, Delta (DAL), and Southwest (LUV). Only American Airlines (AAL) and United Airlines (UAL) are in negative territory at the moment. However, as it was mentioned before, since September Alaska Air’s stock slowly started to climb and I believe it has all the chances to appreciate in value in the upcoming months, even though it slightly depreciated in value from its 52-week high . 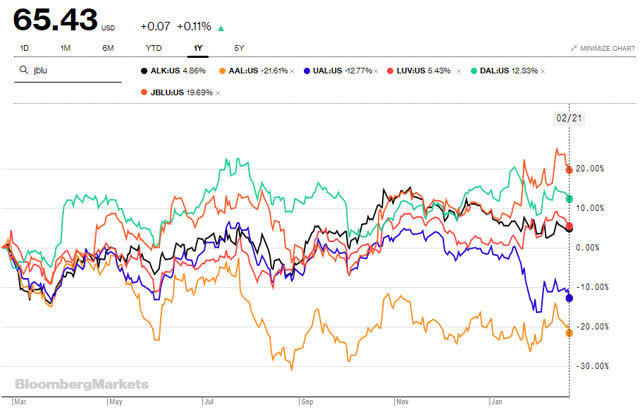 If we compare the valuation multiples of Alaska Air to the same multiples of its closest competitors, we’ll see that its EV/Revenue, EV/EBITDA and P/E ratios of 1,11x, 6.52x and 10.57x, respectively, are relatively close to the industry’s median. This tells us that Alaska Air is not overvalued nor undervalued relative to others. However, Alaska Air has a number of competitive advantages against its peers, which makes it one of the best airlines to currently own.

Source: Yahoo Finance. The table was created by the author.

As Virgin America is now finally fully integrated and Jet Blue is out of the picture, there’s every reason to be bullish on Alaska Air. The company already established a stronger presence on the West Coast, which will help it to expand its profit margin that is currently at 8%. In addition, with $1 billion in FCF, Alaska Air will be able to slowly pay off Virgin America debt, while at the same time accelerate the stock repurchase program. In 2019 the company acquired $75 million worth of its stock, while in 2020 it plans to purchase $250 million of its shares and at the same time end a year with more than $1 billion in FCF due to its ability to drive earnings. The dividend is also expected to be increased and the combined return to shareholders in 2020 should be around $430 million.

Another thing that Alaska Air is currently doing is it doesn’t pick up fights with other airlines anymore. It managed to achieve its strategic goal on the West Coast and all that’s left for it is to focus on its own strengths, peacefully co-exist with others and continue to increase its RPMs. Since Alaska Air is not exposed to the headwinds of the international markets, as most of its flights are inside the United States, it will be easier for it to deliver a 7% EPS growth rate in FY20.

There are no major risks that the company faces in the short-term. The only thing that can cause its stock to decline is the overall market depreciation that could be caused by different factors outside of its control. As for the long-term, when the West Coast market will become too saturated in a few years, Alaska Air will need to expand further if it decides to put top-line growth as its priority. Then it will be forced to repeat the same cycle that it went through a couple of years ago and start to pick up fights with other airlines for its place under the sun.

However, as for today, Alaska Air is a great company to own for the foreseeable future. It is one of the best US carriers in terms of customer satisfaction and it has a number of competitive advantages that could help its stock to outperform the market in 2020 and beyond. That’s why I continue to have a long position in the company and believe that purchasing its stock at the current price is a bargain considering its upside potential.

Aleksey Razdolgin
1.73K Followers
Aleksey is CEO of the proprietary trading company Arbitrage Trades. Aleksey is in charge of creating new opportunities in this rapidly growing investments field. He is personally investing his own money into stocks, cryptocurrencies and other emerging trends of the financial industry.

Disclosure: I am/we are long ALK. I wrote this article myself, and it expresses my own opinions. I am not receiving compensation for it (other than from Seeking Alpha). I have no business relationship with any company whose stock is mentioned in this article.