Don’t let the fear cloud your judgment, use your own eyes, ears, and brain

One of the foundational tenets of science is observation. I'm no scientist but I do have eyes and ears, and I'm open to facts. Here are the facts. The COVID 19 outbreak likely started in China before December but was traced to a wet market in Wuhan in early December. That means that for more than a few weeks thousands of Chinese nationals came into the US. We are now about to see March on our calendar, which means that COVID 19 has been raging in the US for nearly three months. The essential question is, where are the clogged emergency rooms with acute idiopathic lung infections? Where are the Americans (heaven forfend) dropping where they stand, or clogging hospital hallways as we saw in the horrific pictures we have seen out of China? Let’s go back to the numbers, as we have been told that the R level is at 3, meaning that for every stricken person three additional are infected in the next generation. If so, we are talking about a geometric projection, even if only a few hundred infected from China got here. We have had two solid months from that time, and if you take the 14-day incubation period that's eight generations of infection. We should be hearing about at least a few thousand acute cases by now, and of those at least some deaths. Where are they?

There might be less here than meets the eye, Y2K Redux?

WSJ.com had a front-page article about why the virus is spreading globally because it’s mild. This week the stock market lost its collective mind because someone in California turned up with community transmission of the virus and notably hadn’t been to China. ONE person. I hope this person is OK, but if she or he was in dire straits their condition would be widely reported. In any, case, again, we lost nearly a trillion dollars in stock market value because of a non-existent epidemic in the US. I bring to mind the declaration of FDR: “The only thing to fear, is fear itself.” We are beginning to shut down vast portions of our economy out of fear, out of an abundance of caution. I think this will turn out to be a bigger non-event than Y2K with fears of planes falling out of the sky as 1999 turned to 2000. You youngin’s can go on the Google machine to look that up before you “OK boomer” me. At that time the US momentarily tied itself into knots with the fear that the ATMs won’t spit out paper money (remember those?). Anyway, my point is, these groundless fears have come and gone before.

I don’t want to seem to derogate China, but it is what it is

So the question that HAS to be asked is, why is it seeming so much more severe there than here? Again, what do we observe? What's the difference between the US and China? Well, China has had decades-long severe, unremitting air pollution, and smoking is still popular. Also, perhaps for some reason, the majority of US citizens may have a natural immunity to the virus. Aside from the last conjecture, it's a fact that China has some of the worst air on the planet. The fact that this disease did not hit infants and toddlers as severely as adults in China, can be cited that compromised pulmonary systems may have contributed to the mortality levels. Perhaps the reason is that we are not 1.4 billion people crowded together. Perhaps there are other modes of transmission, as the virus was found in the fecal matter of patients. I don’t want to go there, but the US has much better water and sewage infrastructure. It can be any number of things, but the fact remains, we have clean air and clean water. Thanks go to President Richard Milhous Nixon for creating the EPA.

Don’t take my word for it, observe for yourself

You can ignore the prior paragraph as the musings of a layman with an overly active gene for cynicism. Still, if the illness is more severe than the flu, then we will see at least some spike in reported trips to the ER and a rise in hospital bed occupation. Who can forget that China built two hospitals in 10 days, in Wuhan, just to house the most severe cases? We will have to see some kind of spike. The fact remains that as surely as the sun rises the calendar will turn to March next week. If the boogeyman, er... the epidemic does not come to the US our stock market will quickly rerate. If I'm wrong then you’ll see the evidence very quickly. Of course, let me apologize beforehand to the People’s Republic of China for putting the blame on the horrific environmental conditions it subjects its citizens to. It probably has nothing to do with it.

I surmise that COVID 19 is as lethal and possibly less than the flu, and short the VIX

I want to express that notion by buying PUTs on the VIX. Here's a historical chat published on tradingview.com. 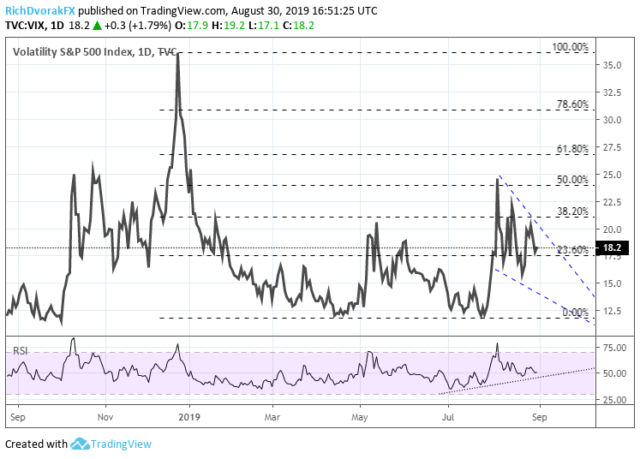 Right now the VIX is at 40 in the pre-market. The VIX at this level is unsustainable. The last time we had the VIX that high was in December 2018 when we were afraid that we were going into recession. The sharpest portion of that spike lasted for less than a week. We are higher than that now. So I'm buying PUT options weekly April 1 expiration on the VIX (VIXW) with a 20 strike. I started buying yesterday and I expect I can buy them cheaper today at the market open. We had the VIX at 12 for months on end. I only want to see the VIX at 17, to make +300%. I may try to push the expiration to mid-April.

My Trades: I'm still holding Alphabet (GOOG) (GOOGL), The Trade Desk (TTD), Shopify (SHOP) and Microsoft (MSFT). These calls are spread, and I have been rolling them down and pushing out the expiration funded primarily by the short calls alpha. I won’t lie, even with the spreads I'm down, but it really is much better than holding stocks and NOT have a countervailing hedge for the downside.

David H. Lerner
27.16K Followers
Author of Dual Mind Research
Proven quantitative & qualitative strategies generating consistent returns
I have been writing about stocks for about a decade. I take a multi-disciplined approach but I am not doctrinaire. I come from a technology background having a software consulting business for a number of decades and also took part in business development for tech media startups. I employ technical analysis when it's called for. I believe that market psychology plays a huge role. My favorite explanation for charting is that charts are essentially a psychograph of sentiment about a stock. Market participants rely on narratives to explain a stock's appeal. If you can identify a narrative or trend as it is forming that can pay outsized rewards. I have an eclectic style and it might take you a few articles to "get" me. Update: We are launching Dual Minds Research. I am partnering with Serop Elmayan, a quantitatively oriented trader that takes an engineer's approach to set up trades. We will start at 8:30 Where I will give the general setup for the day, then after the market starts Serop will run his filter to surface trades of the day. We will attempt to be available throughout the trading day. Leave a question and we will do our best to help.
Follow

Disclosure: I am/we are short VIX. I wrote this article myself, and it expresses my own opinions. I am not receiving compensation for it (other than from Seeking Alpha). I have no business relationship with any company whose stock is mentioned in this article.