Shale production is transitioning from growth to consolidation, albeit at an uneven pace.

In this article we will discuss what we think the market is missing.

We think the turn will come (may have come already) by year's end at the latest.

The market perception will then swing from surplus to scarcity.

I wrote an article a couple of years ago about the "end of days" for little fracking companies, focusing one in particular, Liberty Oilfield Services (LBRT), that was the then-darling of fund managers looking for growth. It came out in early 2018 and I caught a lot of grief in comments, much of which curiously took me to task for putting a "k" in frackers. (It just doesn't look right to me without it, although I will freely admit the verb form frac, is just fine.)

After 40 years in the oilpatch, I am fairly thick-skinned and have been cussed out by experts in the art of pointed invective. Commenters on Seeking Alpha have nothing on the rig tool pushers that have upbraided me from time to time in my career.

Let's look at the fortunes of a few companies I highlighted the article linked above.

The slide in the market this year, post not going to war with Iran and the compounding effect of the coronavirus, has left me in a reflective mood, and I thought I would start this article revisiting the status of a few of these "little frackers." 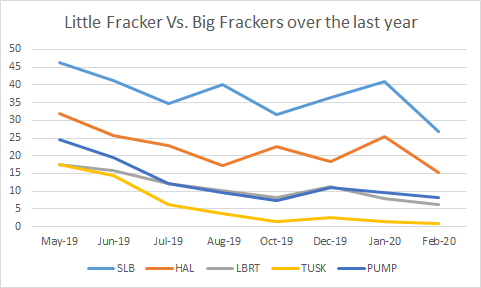 In my article I proposed that if you wanted to participate in the frac revolution you would be better off in Schlumberger (SLB) and Halliburton (HAL) than the little guys. If you're long either of the big colors you've lost about half your money in the past 10 months. Not a record to brag about whatever the circumstances.

However, the little frackers have been ruder with your capital by comparison, shedding between 70% and 98% of their value, respectively.

I consider that point made, we'll move on.

Let's reestablish the case for oil

This point doesn't get made often enough. That fact is evident in the market's pricing of anything related to oil and gas to historic lows currently. It's a matter of perception. Right now the perception is that we are drowning in oil, so why invest in companies that search for it? Also, we are on the cusp of just not needing it anymore. Neither of these perceptions are grounded in reality. In fact as I will point out later in this article we are just a few months away (potentially) from a change in the market's perception on the first point, from one of endless surplus to scarcity.

So let's look at the prospects of demand a few decades out. I often turn to the EIA for data to buttress my contentions about oil. Not that they are right necessarily, but rather they churn out so much information on a plethora of topics, it's easy to find a salient graphic. In the case below the EIA is telling us that 30 years down the road about 80% of the cars being sold will run on gasoline.

Let's say this graphic turns out to be right, or nearly so. In that scenario someone better drill enough wells to make a bunch of gasoline. In 2018 we used 147 bn gals of the stuff. That about 3.4 bn barrels of crude oil! Being generous and still using the graphic above, it looks like BEVs take a couple of million cars a year from gas powered cars, leaving us with still about 12 mm cars a year thirsty for gasoline. The demand remains at around 139 bn gals a year in 2050.

The oil industry isn't going anywhere but into the future.

On to our main topics.

A quick review of the history of shale fracking. Starting in the early 2000s the technology known as "fracking" began to be broadly applied to unconventional reservoirs. It was so unlikely that these reservoirs would produce for any length of time, that had been viewed as being uneconomic for previous 100 years or so.

To no one's great surprise this proved a success. As operators became more familiar with their reservoirs and the technology, the horizontal intervals began to get longer and longer (often reaching almost two miles now, more in some cases). Additionally, the amount of sand packed away grew into the 1000s of pounds per foot of interval. The world changed as these wells gushed new oil production. 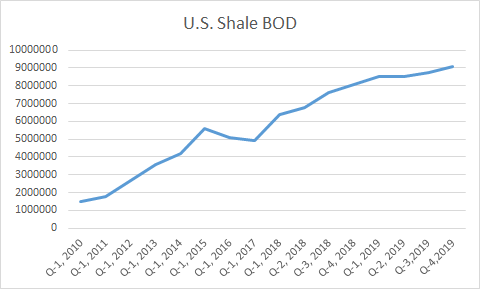 Never at a loss for superlatives, the word miracle was applied liberally, sometimes even by folks who down deep knew better. While imports from traditional sources dropped, and exports to foreign markets grew, investment in shale became a kind of mania. Even bad shale. I will discuss what I mean by "bad shale" a little later in this article.

It was widely proclaimed that the U.S. was now the swing producer of crude oil able to produce to infinity and beyond, regulated only by the number of drilling rigs you were able to deploy. It was a comforting thought if you drive a giant SUV (as I do) and like cheap and plentiful gasoline. It is one, however, that was built on some fundamental half truths and misconceptions.

Bottom line. KSA always will have a natural advantage over shale and retain the title of Swing Producer when the world discovers the shale miracle was an illusion. The chart below is a little dated, but the point it makes retains its validity today. 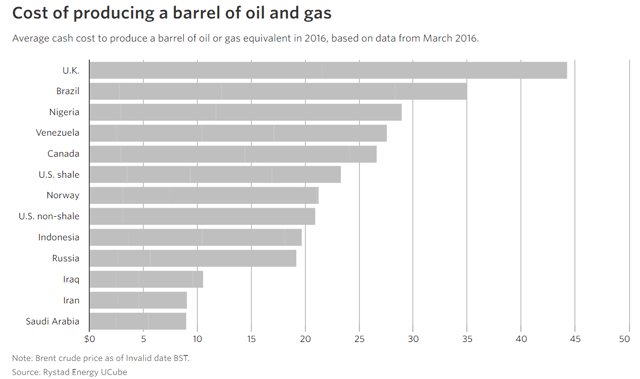 Summary for shale. It has maintained production growth over the last year for two reasons. First, the rate of drilling has brought new production on faster than the decline rate of older wells. Second, DUCs have been brought out of storage to replace production previously supplied by new drilling. Neither of these scenarios are sustainable, and absent higher prices to spur a resumption of drilling, will result in a decline in overall shale production. Not growth, production. Soon.

Is shale production going to disappear? Certainly not, it will continue to be productive for decades. What will change is the factoryization of shale drilling, meaning that successful companies will bring the following attributes to the task. If you read my articles regularly, you've seen these before.

As I have said, this is the future of shale production in America. A future that is just around the corner.

General Drivers in the market for oil

So this is the part you've been waiting for. Where I prognosticate the direction I see oil taking over the next few months. Thanks for your patience.

One of the things I've been discussing in recent articles is a need for a change in the market's perception from one of abundance to one of shortage, or at the very least interruptible supply. We came close to realizing the latter point a couple on months ago when the U.S. and Iran appeared be ready to duke it out. Wiser heads prevailed and the status quo resumed, oil began to back off rapidly toward the mid-$50s. The COVID-19 concerns have destroyed the flow of global trade presently and have taken down forecasts for oil consumption another 1-mm bboed. It will have an impact for a couple of quarters, this is known.

What isn't being discussed is the rebound in demand as fears ease. So that's the bull case for crude later this year. Exhausted supplies of everything will have to be replenished. Oil will be in demand.

Over the short run I'm more pessimistic. Nothing is going right for WTI or Brent. The crash below $50 felt very spongy to me and I'm nowhere near calling a bottom for the next couple of months anyway.

I don't expect much help from OPEC as they are linked to the Russians now, and Russia seems happy with current prices. I haven't had a chance to do any further investigation on this topic, but if it turns out to be actually the case that the Saudis are left to twist in the breeze, something we haven't seen since 2014 could happen. In that scenario, I think they may go the other way and make a run for lost market share as they did in 2014. As I said in an earlier article, Putin is ready to give his buddy MbS (Mohammad Bin Salman Al Saud) some tough love. Will they come around eventually, I think so, but MbS is going to have to give something in return other than a bear hug.

When will I call a bottom?

You should be able to guess here. The bottom will be firmly set in when production from shale plays actually turns south. That will put the final nail in the coffin for the notion of ever increasing light oil from U.S. shale. When the market takes this into account WTI and Brent should head higher.

That day is coming, and I don't think its that far off. 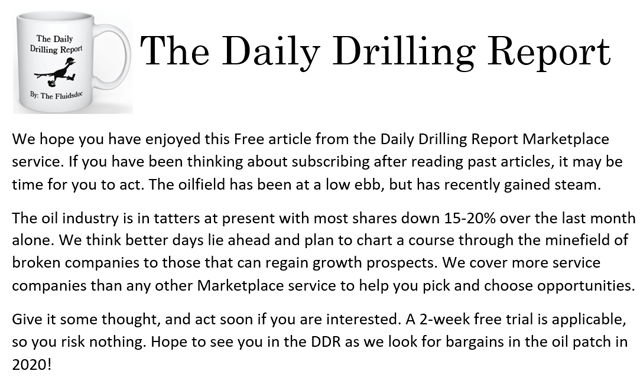 Additional disclosure: I am not an accountant or CPA or CFA. This article is intended to provide information to interested parties, and is in no way a recommendation to buy or sell the securities mentioned. As I have no knowledge of individual investor circumstances, goals, and/or portfolio concentration or diversification, readers are expected to do their own due diligence before investing their hard earned cash

Follow Fluidsdoc and get email alerts
+
Add a comment
Disagree with this article? Submit your own.
To report a factual error in this article, click here.
Your feedback matters to us!