Now the gold price appears to remain consistently strong, it makes sense to have a look at producing gold mines (as the companies with non-producing assets still have tough times to access funding). One of the newer producers is Equinox Gold (NYSE:EQX) (OTCPK:EQXGF) which was created a few years ago by the merger of different companies. And Equinox wants to continue to grow as it’s in the final stages of completing the merger with Leagold (LMNCF) which will boost its production rate to 700,000 ounces of gold this year. And with gold currently trading above $1650/oz, the timing might actually be perfect.

As the merger with Leagold hasn’t closed yet, the 2019 results of Equinox Gold are based on its two producing mines: Mesquite in California and Aurizona in Brazil. The consolidated production of both assets was just over 201,000 ounces which were produced at an all-in sustaining cost of $931/oz, beating the mid-point of the original guidance by almost 4%.

Equinox reported a total revenue of $282M and an operating income of $55.1M which included almost $8.8M spent on exploration (an additional $9.7M in exploration was capitalized rather than expensed – see later), but the bottom line of the income statement shows a net loss of $20.3M despite selling the gold at an average price of in excess of $1400/oz. 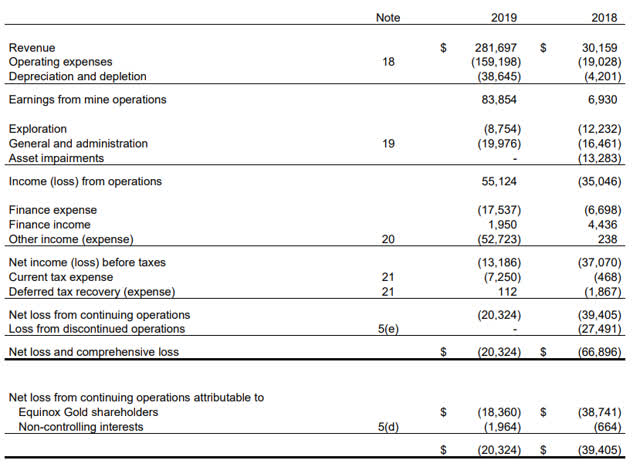 There are two elements to "blame" for this: First of all, the depreciation expenses totaled almost $40M which is almost twice as high as the sustaining capex, but more importantly there was a $52.7M "other expense." According to the footnotes this was predominantly due to two non-recurring items including a $38.2M cost related to the change in the fair value of warrants.

So there's no reason to be alarmed about the net loss. The cash flow statement also shows the strong incoming operating cash flow (although the Aurizona mine only declared commercial production in H2 2019).

The reported operating cash flow was $59.7M but this included a net investment in the working capital position to the tune of $16.4M so the adjusted operating cash flow was around $75M. There were some non-recurring expenses related to spinning off the copper assets into Solaris Copper (which should be listed later this year) but the total capex for the year was $97.6M which apparently resulted in a negative free cash flow of in excess of $20M in 2019.

Does this mean Equinox Gold is underperforming? Not at all. In the mining sector it's important to realize the difference between sustaining capex (investments needed to keep the existing mines up and running) and the growth capex (investments in production growth and/or new mines). In the Management Discussion & Analysis, Equinox Gold has provided a more detailed breakdown of sustaining vs. growth capex.

As you can see, only a minimal part of the total capex was recorded as sustaining capex and a large part of the almost $98M of investments was spent on growth initiatives.

As Equinox Gold is in the final stages of closing its merger with Leagold, the company has refrained from providing any 2020 guidance whatsoever. The 700,000 ounce per year production profile I mentioned in the introduction was the expected production rate announced when the merger plans were made public. 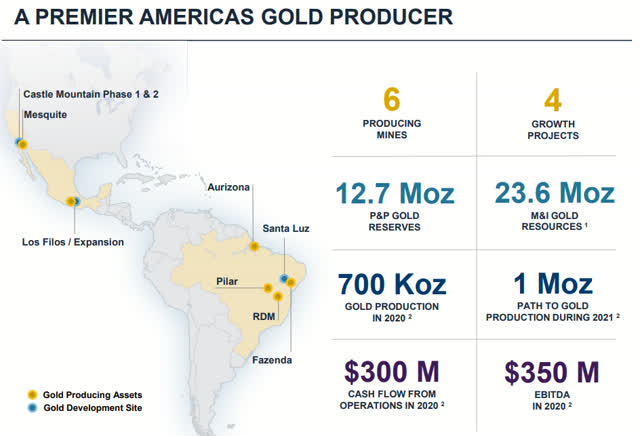 Once all the dust will have been settled, the new enlarged Equinox Gold will undoubtedly quickly publish its expectations for this year, and I'm looking forward to see the anticipated consolidated All-In Sustaining Cost per ounce of gold. Equinox as a standalone company was able to keep the AISC below $900/oz in Q4 2019 and if the combination with the Leagold output doesn’t disappoint, the new enlarged Equinox Gold will be printing money thanks to the current gold price.

The transaction is expected to close later this month, and concurrent with the closing, Equinox Gold also will complete the financing that accompanies this transaction. Ross Beaty will subscribe for new stock at C$8.15/share to the tune of US$40M while Equinox also has arranged a five-year convertible debenture for US$130M with a 4.75% coupon, convertible into Equinox stock at US$7.80/share (which means the convertible already is in the money). And finally, four major banks have committed to provide $500M in debt, consisting of one five-year loan for $100M and a revolving credit facility to the tune of $400M.

For additional background on this transaction, I can recommend the update published by Peter Arendas back when the deal was announced.

Equinox Gold and Leagold may have perfectly timed the merger as the synergy benefits and the enlarged production profile in combination with a high gold price could result in massive cash flows. We will have to wait for the official guidance to be published to figure out the details, but the sustaining free cash flow could come in close to half a billion dollars this year (based on the current gold price).

The Investment Doctor
16.78K Followers
Author of European Small-Cap Ideas
We zoom in on capital gains and dividend income in European small-caps
As I'm a long-term investor, I'll highlight some stockpicks which will have a 5-7 year investment horizon. As I strongly believe a portfolio should consist of a mixture of dividend-paying stocks and growth stocks, my articles will reflect my thoughts on this mixture.