China has been the epicenter for the coronavirus outbreak, but its stock market is suffering the least on a year-to-date basis through yesterday's close (Mar. 12) for the world's major equity market regions, based on a set of exchange-traded funds.

The iShares MSCI China ETF (MCHI) has lost 13.7% so far in 2020 through yesterday's close. That's a painful setback, but it's relatively modest compared with the rest of the field.

Why is the sell-off relatively modest for China's stock market? "We're better off than offshore markets in terms of virus outbreak containment, lower overall valuations and bigger policy room," opines Dai Ming, a fund manager with Hengsheng Asset Management Co. in Shanghai. "Chinese stocks will fare better than global peers despite some short-term pullback," he predicts. 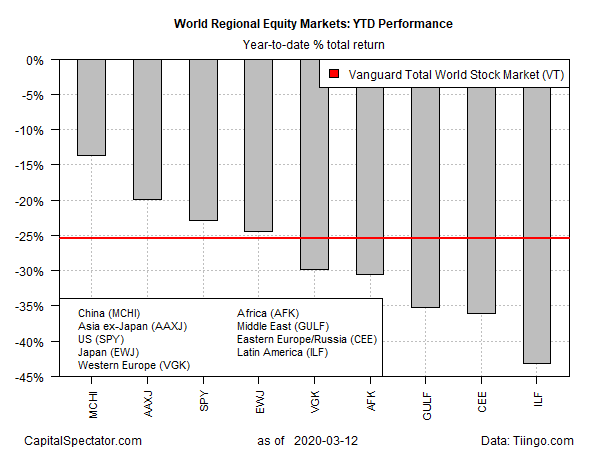 China's Wuhan city, ground zero of the new coronavirus outbreak, reported five new cases on Friday, the second day in a row the tally has been less than 10, while no locally transmitted infections were reported in the rest of the country.

Mi Feng, a spokesman for China's National Health Commission, says "broadly speaking, the peak of the epidemic has passed for China. The increase of new cases is falling."

For much of the rest of the world, including the US and Europe, the outbreak is at an earlier stage. Dr. Anthony Fauci, director of the National Institute of Allergy and Infectious Diseases in the US, in testimony to Congress this week advised: "I can say we will see more cases and things will get worse than they are right now."

Profiling all the funds listed above through a momentum lens reflects broad weakness in the wake of the widespread selloff. The analysis is based on two sets of moving averages, which point to a sharp deterioration for global shares on the short-term front. The first measure compares the 10-day average with its 100-day counterpart - a proxy for short-term trending behavior (red line in chart below). A second set of moving averages (50 and 200 days) represent an intermediate measure of the trend (blue line). Based on data through yesterday's close, the outlook has turned sharply bearish for the short-term outlook, although the intermediate trend has yet to confirm the downside bias. 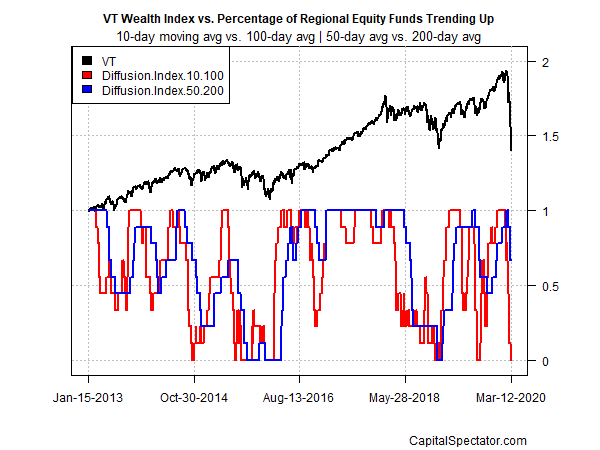 James Picerno
5.85K Followers
James Picerno is a financial journalist who has been writing about finance and investment theory for more than twenty years. He writes for trade magazines read by financial professionals and financial advisers. Over the years, he’s written for the Wall Street Journal, Barron’s, Bloomberg Markets, Mutual Funds, Modern Maturity, Investment Advisor, Reuters, and his popular finance blog, The CapitalSpectator. Visit: The Capital Spectator (www.capitalspectator.com)