I can remember October 2008, and we were in the middle of a major financial scare as the great recession was in full swing. Warren Buffett wrote an op-ed in the New York Times with the title "Buy American. I am."

He would go on to suggest that although he could not predict the short term, he believed in America and in equities. That ended up being great advise. 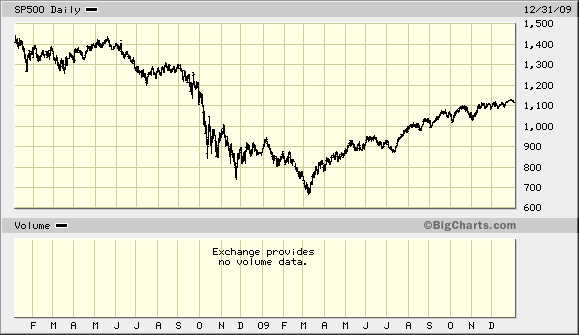 I Recall during that month, one investment I made was in shares of Newell (NWL), a company that had not much to do with a downturn in real estate or mortgage-backed securities. Folks would always need garbage cans and bins I figured.

I recall being shocked to see the share price simply continue to plummet in the months ahead down from around $13-15 per share to $5 per share by March, 5 grueling months later. I thought for sure I made a mistake when the share price dropped hard in December and I sold. What the heck did Buffett know, I thought! While selling not long after I bought may have looked right in the short term, as shares would drop another 50%, did I end up buying back the shares at $5 in March of 2009? No!

So I ended up missing out on making a great investment due to my inability to time the market. 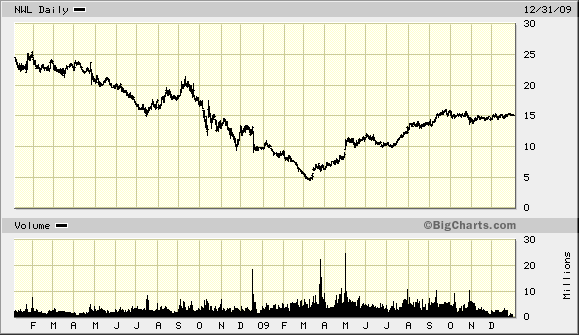 Things would have turned out much better had I implemented a plan to dollar cost average my investment.

For greater perspective, here is a very long-term chart of Newell: 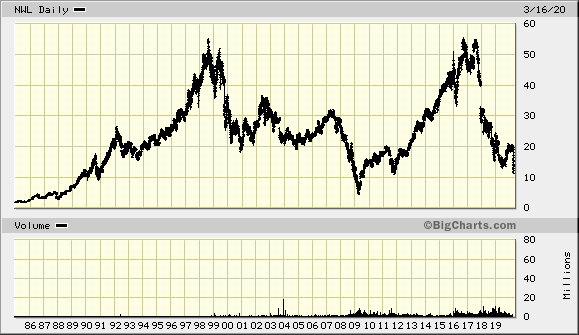 That episode in late 2008 and 2009 would prove to be a good time to buy shares, as in the following years ahead, the price would appreciate substantially.

When we try to catch the proverbial falling knife, we can get stabbed emotionally and in our brokerage account balance as well.

This can be remedied with dollar cost averaging. Buying a fixed amount of money worth of shares in intervals.

Had I simply decided to buy $1,000 worth of Newell shares the first of every month for the next 12 months, I would have been less concerned about the lower share prices that came ahead because I would have been able to purchase more shares with each $1,000 investment.

The end result of doing this 12 times makes my $12,000 investment have an average cost per share in the end.

In the recovery years ahead, there're usually higher share prices to be had when the dust settles and confidence returns.

Looking at Newell today, it has crashed again as the company simply has a lot of debt and that puts on a whole new level of risk right now.

It's always going to be important to know when to sell. It's said wealth is created by moving money from overvalued assets to undervalued assets.

I'm throwing this out there because it's important to appreciate. There is always the risk of long-term declines.

Japan and her Nikkei 225 index peaked in 1989 and would decline for the following 20 years before bottoming in 2009. 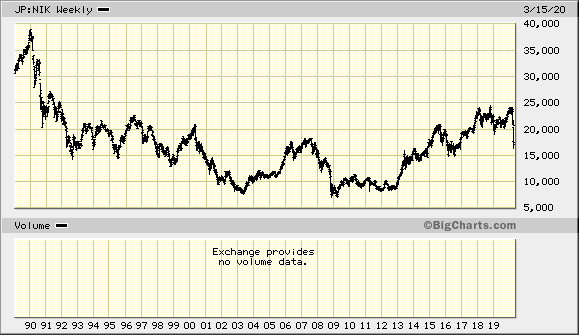 That would be an example of the wrong index to dollar cost average. Same goes for any stock that has a risk of going bankrupt which would be companies with lots of debt like craft supply store The Michaels (MIK) that I wrote recently about.

Japan had a demographic decline that contributed to its long-term stock market decline. That coupled with low inflation and low interest rates.

Pick Your Stock and or ETF

Diversification truly is protection against ignorance. Do your research here on Seeking Alpha and choose your investments confidently.

I like the SPDR S&P 500 ETF (SPY) as a good means to play off the dollar cost average strategy. However, there is no downside to diversifying your strategy into individual names or other ETFs as well.

If there is one lesson I learned from the market crash of 2008 and 2009, it's hard to be rational and make decisions you can feel confident about as deluges of negative information come everyday and your investment decisions are proven right and wrong and right again and then wrong again day in and day out like we're seeing today.

The market's job is to take your money if you choose to try to trade day to day or week to week.

Considering the fierceness of this sell-off, starting as soon as possible makes sense to me.

If you have been fortunate enough to have sold at prices that are higher than today and are in a position of cash, consider getting back into the market with a dollar-cost-averaging plan.

There is no telling to what extent or for how long the market's reaction to the response to this virus will be.

I expect more of the same, fierce rallies followed by fierce declines with longer durations for the rest of the year as the market tries to figure out how bad the damage will be.

Once a month over the next 12 months could be a good strategy for your dollar-cost-averaging game plan.