Although not everyone agrees with me, buybacks remain one of my favorite "dividend alternatives" for benefiting from the cash profits of the profitable businesses I invest in. In some ways, buybacks act as automatic dividend reinvestment plans, and are especially advantageous to taxable or foreign investors who would otherwise need to pay or have withheld a significant tax drag before reinvesting dividends. Although investors who live off their dividends may not find the increase in the percentage of the company they own as tangible as a cash dividend, a diversified portfolio even for income investors can afford some "dividend alternatives" in the form of "buyback achievers" to complement their "dividend aristocrats". In this article, I am focusing on the holdings Invesco BuyBack Achievers ETF (PKW) as a place to look for companies that buy back a significant portion of their own shares. I will then compare the top component of PKW, Apple Inc (AAPL), with a non-dividend paying company that may have an even smarter buyback strategy: Facebook Inc (FB).

Why Buybacks Are Attractive

In the recent sell-off that has seen the S&P 500 fall more than 25% off its recent highs in record time, it would be natural to think that one of the most natural buyers of shares on this dip would be the most cash rich companies themselves. One reason I like buybacks as a signal is that buybacks typically say two things:

The second factor tends to be the more questionable, as many companies have a terrible record of buying back their shares high, and then not being ready to pull the trigger on buybacks when their shares are "low". This is a key critique of buybacks in practice outlined in Daniel Peris' excellent book on dividend investing, Getting Back to Business.

Buybacks can also be seen as a signal that the firm's incremental return on invested capital is so poor that they have no ideas better than buying back their own shares, but of course that depends on the numbers and opportunities we're talking about. In many cases, I consider buybacks to be a better alternative to acquiring another business that may have a lower ROI, as well as a way of delivering above-growth rates of return to shareholders on a mature but profitable business. I have highlighted buybacks as one key driver of how Facebook could double an investor's money without reaching a $1 trillion market cap, and the opposite of buybacks (heavy share issuance) a key headwind for Tesla.

The simplest proxy I could find for the performance of buying buyback achievers, relative to broader market averages. Below, I compare the total return of PKW versus the SPDR S&P 500 ETF (SPY) over the past 13 years since 2007, showing how PKW fell as much as SPY in the 2008-2009 bear market, then outperformed in the following 11 years, before underperforming last month.

Although I don't know an easy way to visualize the historic component makeup of PKW, I suspect part of its recent underperformance may have to do with its relatively heavy allocation to financials, as seen below. 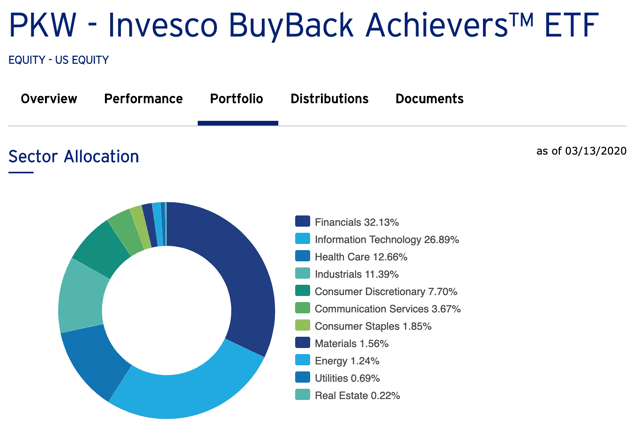 Although one would think financial firms with investment banking arms should be relatively good at knowing when buying back their own shares would be better than raising their dividends, I would need to spend more time on the specific financial components to see how they compare with the non-financials. For now, I mostly prefer to analyze financials and non-financials separately, and fortunately, the top component of PKW at over 6% is the very well covered non-financial stock AAPL.

Below, we can see that although AAPL had started building up its significant cash pile gradually after its 2007 introduction of the iPhone, AAPL notably didn't start significantly buying back shares until its share price dip in 2013-2014. It seems the dip in AAPL's cash in 2008-2008 was most likely invested in expanding its business to put nails in the coffins of Nokia and Blackberry (as described in my last article). Since 2015, it seems buybacks were less specifically timed around dips, and more around when AAPL's cash pile grew significantly large. The 2017 tax cuts and jobs act further encouraged AAPL to repatriate overseas cash into even more buybacks since 2017. Perhaps unfortunately for shareholders, buybacks seem to have dipped the last time AAPL shares dipped, so it will be a key signal to see if the recent uptick in buybacks picks up this quarter, especially below 250/share. As of this writing, there were also no open market buys in AAPL in the past 12 months, and it would be nice to see some of that as a confirming signal.

Facebook only went public in 2012, but since then, we have one significant sign of how strategic Facebook has been in buying back its shares: the 40% drop in 2018 during the Cambridge Analytica data scandal. The below chart shows that FB deployed a significant chunk of its >$12 billion cash pile at the time to buying its shares on the way down, with a significant share of their buyback close to the bottom. FB has continued to do smaller buybacks since, but one key indicator I'll be watching is how much of their current $19 billion cash pile FB uses for buybacks on this dip, and how that compares with the 2018 buyback. I can understand based on PKW's rules why FB didn't make the cut to be a PKW component this quarter, but in my view, this little chart seems to indicate FB 2018 buyback has been one of the greatest achievements for shareholders I've seen. For what it's worth, FB has also seen more open market insider buys of its stock as well.

Many of America's most profitable companies are sitting on billions of dollars in cash, and are likely to remain profitable even if the coronavirus (or whatever else) pushes the economy into a recession. These companies would be among the most ready and informed buyers of their own shares if they are truly bargains at these levels (or near-term levels), so even long-term investors should find it worth watching this "dividend alternative" indicator as a buy sign. As we saw with FB, perhaps one of the most successful buyback achievers so far, buybacks may not necessarily mean the bottom is in, but are an assuring sign of confidence.

Beyond quarterly earnings and dividends, we look at quality stocks positioned to raise your income through dividends and dividend alternatives over the next quarter century or longer.  Get inspired with your free trial to Long Run Income.

Tariq Dennison
4.84K Followers
Author of The Expat Portfolio
Clear ideas to grow your capital and income without the noise

Tariq Dennison TEP runs GFM Asset Management, a registered investment adviser for cross-border families and retirement plans between the US and Asia. His marketplace service "Long Run Income" focuses on dividend growth and dividend alternative ideas for generating investment income over multi-decade time horizons. Tariq is the author of the book "Invest Outside the Box: Understanding Different Asset Classes and Strategies", spends most of his time in Hong Kong and around Asia, and teaches two classes at the Masters in Finance program at ESSEC Business School in Singapore.

Disclosure: I am/we are long PKW, FB. I wrote this article myself, and it expresses my own opinions. I am not receiving compensation for it (other than from Seeking Alpha). I have no business relationship with any company whose stock is mentioned in this article.