A recession in the US is unavoidable. Policymakers and politicians are left to merely try and minimise the risk that it doesn't become a depression. Only better news on Covid-19 can turn things around

What a difference a month makes...

The turnaround in the US economic outlook has been astonishing. The economic data published so far year-to-date, according to the Atlanta Fed GDPNow model, is currently running consistent with annualised growth of 2.9%. However, it is clear that we should be braced for awful numbers for March, which are going to drag this figure dramatically lower. The supply crunch in manufacturing, the panic in the financial sector and the collapse in demand in sectors such as airline travel, hotel stays and leisure activities mean that we will be fortunate to see positive overall growth for the quarter.

Moreover, with effective city shutdowns spreading across the country, we are now expecting to see a GDP contraction in the second quarter that is on the scale of that reached during the height of the financial crisis over 10 years ago. Our best guess (we are loathe to call it a “forecast”) is an 8.6% annualised 2Q20 GDP decline. To give that some context, the economy contracted a mere 8.4% in 4Q08 followed by a 4.4% drop in 1Q09. Click here for our full list of latest economic forecasts, published on Monday. 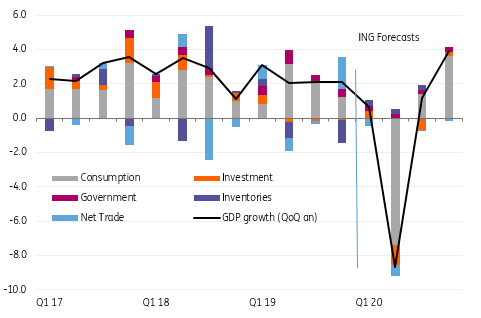 Consumer spending will be responsible for most of the decline given the Covid-19 dislocations with risks skewed to the downside. For example, unemployment claims have jumped seven-fold in a week in Ohio (45,000 versus 6,500) following the order to close many businesses. This points to a potentially calamitous situation in the US jobs market if repeated elsewhere and underscores the desperate need for both an increase and an extension of unemployment benefits. So, with the prospect of a large payrolls slide as company finances are squeezed by falling demand and tightening credit conditions, any chance of a pick-up in worker pay has gone.

Investment also looks set to plunge as firms hunker down for protection while exports will be hammered thanks to the drop in global demand. Even if we start to see some relaxation in the protocols that are being adopted to stem the increase in Covid-19 cases at some point over the summer and positive growth returns, we still expect a full year 2020 negative GDP growth figure – our current guess is -0.4%.

As for inflation, the oil price plunge is already resulting in sharply lower gasoline prices and means negative headline inflation looks certain over the summer months. We expect core inflation to fall too, given weaker demand and wage growth.

Inflation to be dragged negative by energy prices (YoY%) 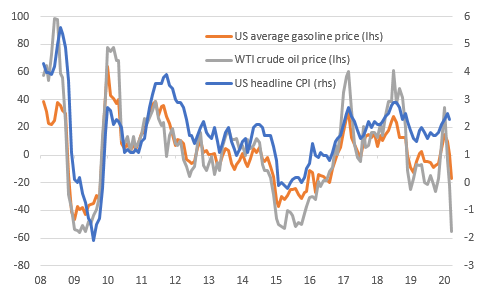 … So said President Trump at yesterday’s press conference. The dire economic outlook given the uncertainty over Covid-19 has kicked the White House into action. In various briefings during the day, it became clear that the government is finalising a fiscal package worth up to US$1.2 trillion (it started off at US$850 billion Tuesday morning and in some releases is now back down to $1 trillion so there is still some work to be done), equivalent to around 4.5-5.5% of GDP depending on the number you want to pick. It needs to be approved by Congress first, but with President Trump seemingly having moved away from the idea of a payrolls tax cut (which wouldn’t have done much for the most vulnerable – the elderly and unemployed without healthcare benefits) towards direct relief, it stands a high probability of being passed relatively swiftly. A general structure appears to be:

The key thrust is seemingly a cheque of “at least” US$1,000 to households within the next two weeks. By way of comparison, the 2009 America Recovery and Reinvestment Act sent cheques for US$250 to more than 52 million people receiving social security payments while workers received a tax cut of US$400 for individuals and US$800 for families.

The problem with this is that with people not allowed to/deterred from visiting restaurants and bars or travel or visit theatres and cinemas, that money is not going to be spent in the sectors that have been most hard hit by Covid-19. Nonetheless, it will offer help to households who have seen their job and income situation affected by what has happened. But US$1,000 is not going to last long. Given the time frame virologists are talking (see the widely shared Imperial College paper for example), substantially more support is likely going to be required for many individuals.

After cutting rates, implementing quantitative easing and ramping up measures to promote market liquidity, the announcements from the Federal Reserve keep coming. We now have a new commercial paper funding programme and a primary dealer credit facility, with officials suggesting they could produce more programmes with “everything on the table.”

As we keep saying, monetary policy action in itself is not going to rescue the US economy from recession, but it will help to mitigate the risks from financial tensions that could make the growth and jobs outlook far, far worse. Only better news on the prognosis for Covid-19 will return us to “normality.”

The deficit is set to soar

There seems little doubt the government deficit, which is already at 5% of GDP will breach 10% of GDP later this year. It could in fact end up being closer to 20% should the virus show little sign of subsiding and the fiscal stimulus measures need to be upped significantly further.

As such, longer-dated yields are coming under more upward pressure – rising back above 1% currently having been as low as 0.54% just days ago. The two-year in contrast is just 0.50% versus lows of 0.36%. As a result, we may well see the Fed choose to focus its QE efforts on the longer end of the curve to ensure that yields there are capped and don’t end up tightening financial conditions too much.

Where next for government borrowing and unemployment? 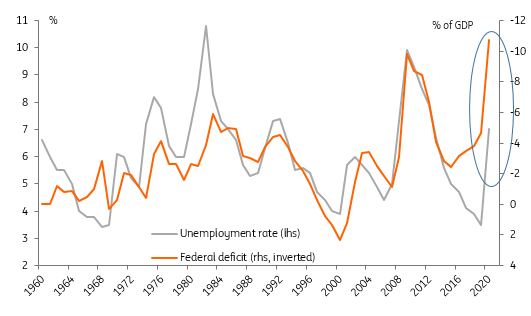 ING Economic and Financial Analysis
2.46K Followers
From Trump to trade, FX to Brexit, ING’s global economists have it covered. Go to ING.com/THINK to stay a step ahead. We’re sorry we can’t reply to individuals' comments.Content disclaimer: The information in the publication is not an investment recommendation and it is not investment, legal or tax advice or an offer or solicitation to purchase or sell any financial instrument.This publication has been prepared by ING solely for information purposes without regard to any particular user's investment objectives, financial situation, or means. For our full disclaimer please click here.