While stocks (ACWX, EFA, EEM, SPY) are not in great shape as the US Wednesday session revs up, the action is even worse for oil (USO), which hemorrhaged value more or less near the close of Tuesday's US trading day.

US futures bled through most of the night, with the after-hours low on the S&P at 2344; intraday vol is still nauseatingly high by most investors' reckoning. 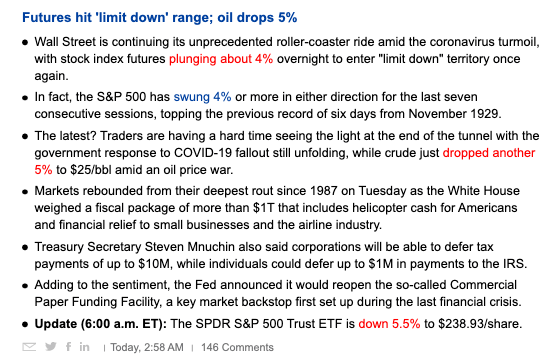 The news of fiscal deliverance cheered on US risk assets yesterday. Various forms of stimulus are likely needed. The trouble is what form, how much, and over what time frame. While swirling rumors have already shown themselves capable of an updraft, the market appears to want cold hard facts, and soon.

Many thanks to Ryan Detrick, CMT for assembling this quick analysis on US bear markets going back to the 1950s. It is too early to say as of yet whether or not the US is about to enter a recession. There were strong concerns to that effect, off and on, between fall 2018 and late summer of 2019; one might reasonably expect that a mass disruption such as the one we find ourselves in would kill the long-lived US expansion that began in 2009.

For the time being though, I'd recommend steering away from terms such as "bear market" or holding one's breath until we get to full recovery. Watching volatility is a better approach, as that is a metric that is right in front of us and that we ultimately must contend with.

A commenter left this post yesterday as it related to comments about the shape of the VX term structure. Most investors I am sure really would like to see the vol come down, accompanied by a flattening volatility futures curve.

And certainly, given its sweet old time, that will in fact happen. But while "Baron Von Markowitz" states that "it would be good", that's not the same as saying "it's about to happen."

In light of the evolving volatility pattern for most of the last decade, it is truly remarkable just how resilient volatility has in fact been going back to mid February or so. That does mean vol cannot take a tumble - in fact it has on several occasions in the last month. But then it just dusts itself off and trucks on higher. 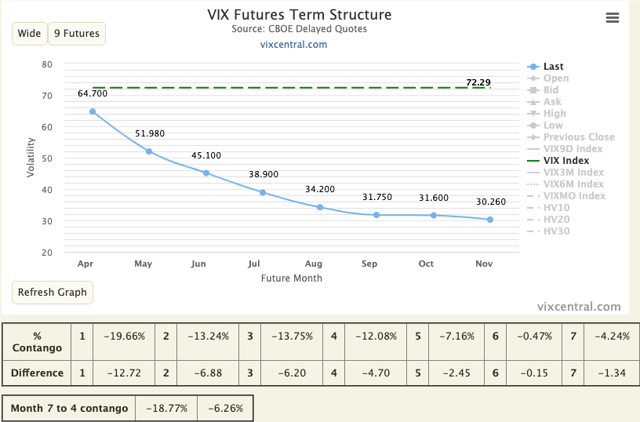 Speaking to the shape of term structure, I'd like to view the current VX futures: the front month is the April ("J") contract, and it is brand spankin' new - not to expire for 27 days. For now, there is about a 10.5% roll decay between spot VIX and the front month, which is borne presently by short-vol position takers (SVXY) rather than long-vol (VXX, UVXY).

The fact that the Nov ("X") contract is an election month will likely keep it more elevated than it would normally be; we saw that even back before the crisis accelerated, albeit at lower levels.

Whether you are a volatility trader or whether you shy away from such products, I think in this environment it is worth looking at oil, and the VIX of oil for that matter. USO VIX now sports a handle greater than 150... more than double that of S&P 500 VIX.

In order for equity vol to level out, we may need to see supporting characters - oil, the USD, the 10YR UST - do their respective parts in settling down first. While it is true that correlations often increase during times of panic, calming vol in corners of the market (such as junk bonds starting in late Q4 of 2008) can act as an initial thaw for stocks.

As it stands, the bull market of the last decade was a low-vol bull, and so there's plenty of room to expect that investors won't be able to withstand these pressures for long without ceding ground on the absolute level of equities.