But a very close second, at least when it comes to REITs, is “cash is king.” In fact, you could even say that rule No. 1 doesn’t work long-term if it doesn’t automatically align itself with rule No. 2.

That’s because REITs pay out so much cash every year. It’s the main reason why investors buy into them in the first place: The dividends they’re designed to faithfully offer.

In order to stay faithful though, they have to have enough cash on hand to cover those shareholder perks.

They also need enough cash to cover everyday business expenses, such as salaries, utilities, taxes (although REITs do pay less in that regard by doling out more money to shareholders), and so many other expected or unexpected costs.

For the record, when I say “cash,” I don’t necessarily mean actual greenbacks being physically held in these companies’ hands. I mean money that’s not tied up in investments. So funds that are easily available.

It’s true that those funds aren’t growing over time, unlike so many other asset types. But it’s also true that, if things go bad, nothing else works quite as well. 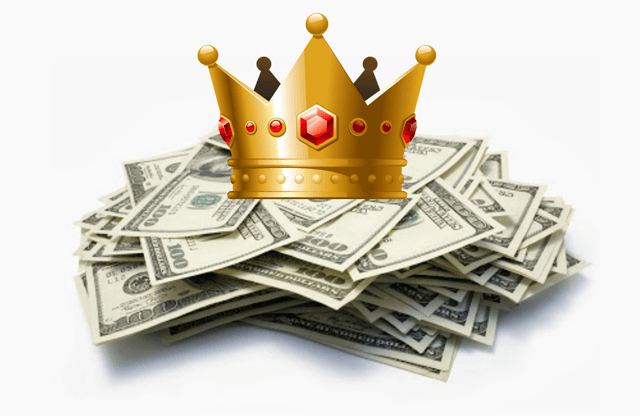 The Circle of Market Life

Please don’t for a moment think that last line means things aren’t going to “go good” again in the future. It’s just a matter of how long the current “bad” will last.

With the virus spreading how it is, there’s no way to tell. It’s the same as how there was no way to tell this was going to be such a crisis – or a crisis at all – even late last year.

For instance, on Jan. 21 – just about a month before the markets began their long, fear-fueled descent – billionaire hedge-fund founder Ray Dalio dismissively declared that “cash is trash.” And MarketWatch reported he wasn’t alone in that hard-core bullish assessment:

“A monthly fund-manager survey conducted by Bank of America found that managers were holding on to their lowest proportion of cash since 2013, even though the percentage of managers expecting global economic growth to improve rose seven percentage points to 36%.”

I would imagine they’ve since regretted that choice, considering the current situation.

Bad times should always be at least somewhat expected. That’s part of the reason why REITs are generally such good holdings. They go up slowly, but steadily over time, a track record that makes them safe havens during most market downturns.

Admittedly, they’re still suffering in most of the market-wide selloffs we’re seeing now. But that doesn’t mean they won’t fully recover, just as long as they have enough cash on hand.

The more, the better. Because, again, we don’t know how long this is going to last.

Some Good News? Or at Least a Very Good Perspective…

Mark Walker, managing partner at Tollymore Investment Partners, noted in a recent email how “many public commentators and investment bank strategists were calling for a market correction.” Though nobody expected anything quite like this.

Likewise, nobody can expect when it will end.

“We could come up with reasons to justify why markets have overreacted – 12 countries account for almost all COVID-19 cases, but warmer weather kills almost all respiratory diseases. We have seen peaks in early markets already and significantly lower fatality rates than commonly understood. But panic spreads more quickly in a social media world. Predicting the evolution of its effects is well beyond the scope of human abilities.”

As such, “Future investment decisions should be made on data, not emotions.” Moreover, “The only way to navigate these periods with sanity and resilience is to have a very long-term view.”

I couldn’t agree more. And the collection of REITs I’m debuting in my upcoming Cash Is King Portfolio follow that same philosophy. They knew to save for a rainy day. That’s why they’ll survive this current flood.

That mentality has also turned millionaires into billionaires like Warren Buffett and Sam Zell.

It’s why Benjamin Graham preached that, “Adversity is bitter, but its uses may be sweet.” And Sir John Templeton said, “To buy when others are despondently selling and sell what others are greedily buying requires the greatest fortitude and pays the greatest ultimate rewards.”

How great they’ll be depends on your:

Those companies might stumble. They might even fall. But they always get back up stronger than ever.

To quote Graham again, “A market downturn is the true test of an investment philosophy.” And we’re ready to prove that we stand by ours.

In a recent article I explained that "fear is not an investment plan… We are now stress-testing our entire REIT universe to design and construct a dry-power portfolio. While retail closures will hit all retail landlords, we still see value in malls and outlets…

As you know, there is opportunity in the chaos. And we plan to take full advantage of the sell-off to create significant wealth... I have trained 30 years for this black swan event, and it's time to go to work."

Many readers have been asking us what we should buy during these chaotic times and our training has provided us with an opportune time to capitalize on the current market sentiment.

Our primary objective is to be tactical REIT investors and that means we will not be rushing out to deploy capital just to get exposure to cheap REITs.

On the contrary, we will be stress testing each prospective REIT in granular detail to determine whether it's worthy of ownership. As I explained in a recent article, “now is not the time to become a high-yield REIT investor, always focus on nothing less than quality, quality, quality.”

As the Wall Street Journal reported “a rush for cash shook the financial system Wednesday as companies and investors hunkered down for a prolonged economic stall, taking the recent market turmoil into a new, more troubling liquidation phase.

"Investors sold nearly everything they could in the most all-encompassing market drawdown since the darkest days of the 2008 financial crisis.”

Recognizing the “blood in the water” we decided it was time to pounce on shares of Broadmark Realty (BRMK) and Ladder Capital (LADR). 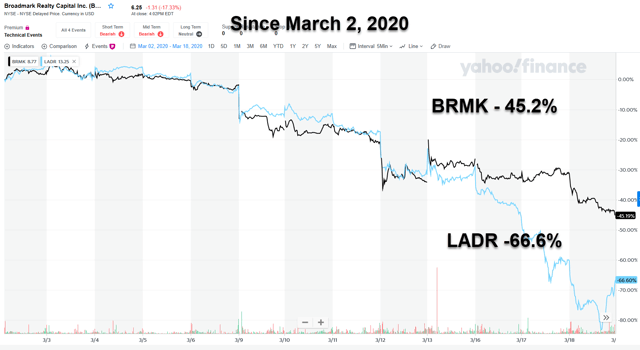 Although the fear has become overwhelming, we consider shares in both of these REITs opportunistic, which is why we added them to our “Cash is King” portfolio.

Broadmark’s business model is simple, it loans money out to homebuilders at interests ranging from 12% to 13% and with origination fees of 4% to 5%. The loans are from six to 12 months, and after deducting G&A costs, Broadmark generates core earnings of around $.80 per share (that was in 2019).

We expect to see that move closer to $1.20 per share in 2020 as the company normalizes overhead. Keep in mind that BRMK has no debt and plenty of cash on hand. The CEO told me earlier this week “we could do $1 billion in loans” and he added "I think we come out of this stronger.” Broadmark shares closed at $7.56 with a dividend yield of 14.3%. 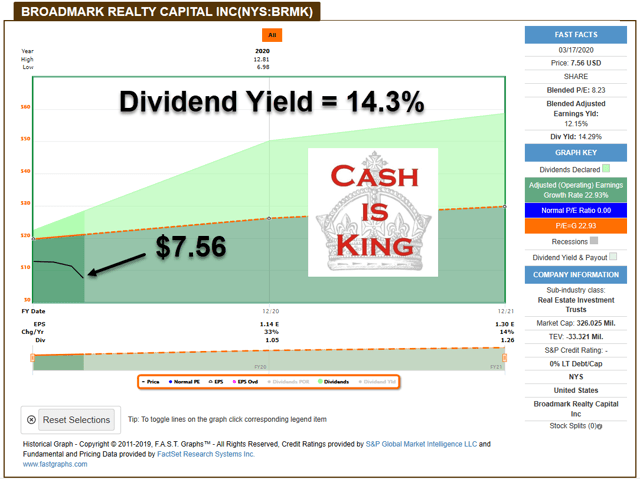 Ladder Capital shares fell by almost 57% yesterday and then swung back up by around 40%, creating the whipsaw effect of a 16% price decline. As I explained to Marketplace members, “LADR raised $750 million a few weeks ago priced at 4.25% in a private placement (the largest single-tranche senior notes offering issued in the commercial mortgage REIT sector since LADR started in 2008),” signaling the company had ample liquidity.

Meanwhile, LADR shares are now yielding 21.0% on what I would describe as one of the most irrational trades in the REIT sector right now. 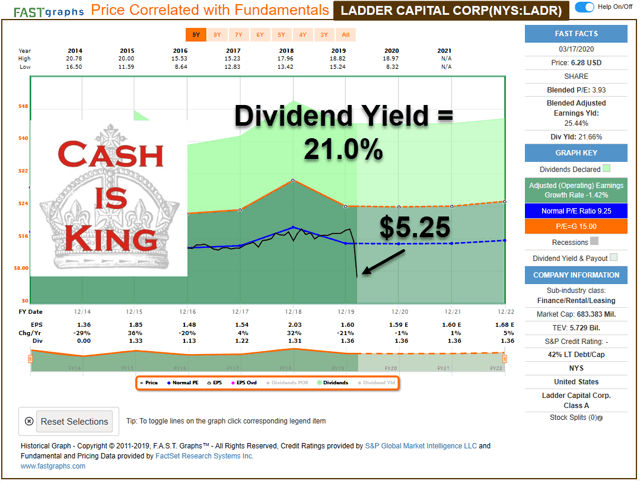 Stay Calm, This Too Will Pass (our all-new Vodcast)

As Dividend Kings co-founder Chuck Carnevale says on our brand-new vodcast (video + podcast), this latest crisis is "more than likely going to have a short-term effect." In the meantime, "There is great opportunity" to take advantage of... subscribe to iREIT on Alpha (2-week free trial).

Disclosure: I am/we are long LADR, BRMK. I wrote this article myself, and it expresses my own opinions. I am not receiving compensation for it (other than from Seeking Alpha). I have no business relationship with any company whose stock is mentioned in this article.