Bill Ackman is an American hedge fund manager who is the founder and CEO of Pershing Square Capital Management. Occasionally, he appears on CNBC, the business news network. Ackman is a self-proclaimed activist investor.

He rose to fame with a high-profile short position in Herbalife (HLF), a company that sells nutrition solutions through independent sales representatives. Ackman argued that the company was a Ponzi scheme. In 2013, he feuded with Carl Icahn, another hedge fund manager who held an opposing position in Herbalife, on CNBC. In what turned out to be a zero-sum game, Icahn pocked around $1 billion on his long position, and Ackman lost the same amount.

Ackman has had more than a few victories. His latest was with Chipotle Mexican Grill (CMG). He bought the shares when the company was on the brink of extinction after some customers became ill and rode the shares higher. The feud with Icahn had all the drama of reality business TV, but his latest performance on the network was even more controversial, and it caused a weak stock market to tank.

A time of fear and uncertainty

We are at a time in history like no other in our lifetime. Markets reflect the economic and geopolitical landscapes. War, terrorist events, financial meltdowns all have an impact on prices. Acts of God, like weather events, earthquakes, or other natural disasters, tend to be localized. While they can cause the prices of assets to move higher or lower, most people are far away from the impact of the event.

The world currently faces a faceless and lethal enemy in the form of a microscopic virus. The environment is surreal and something out of a science fiction novel. Unfortunately, Coronavirus is anything but fiction. It has already killed the bull market in stocks. Just one month ago, the US economy was growing at a moderate pace with unemployment at its lowest level since the 1960s. With the halt in the economy in the world's wealthiest nation, as well as the same conditions across the globe, the situation suddenly resembles the 1930s and the Great Depression.

We have experienced periods of fear and uncertainty in the past. President Franklin Delano Roosevelt told Americans, "the only thing to fear is fear itself." The rallying cry came during the last significant threat to the world. At that time, there was not only fear but a great deal of uncertainty. COVID-19 puts the US and the world in the same position as when FDR uttered those comforting words and challenged the citizens of the US to action. In 2020, the same message is critical for all of the 7.6 plus people across the globe.

An interview CNBC wishes it did not do

On March 18, hedge fund manager Bill Ackman appeared on CNBC. With panic in his voice and limited knowledge about what local and federal governments were planning to address the spread of Coronavirus, he stoked the kind of fear that was not only unproductive but downright dangerous.

Mr. Ackman is a human, just like you and me. He has an elderly father, and fears for his safety. He is also a very wealthy individual who fears for his rather extensive net worth. He told viewers, "Hell is coming." He warned the Us government that it needed to take an immediate "Spring Break" and close down the nation for at least thirty days.

No one, including the brightest scientific minds, knows what havoc Coronavirus will wreak. The government is scrambling to address the virus and save individuals as well as their livelihoods. The situation is a challenge and has become worse. Government officials are doing their best to calm the masses while making tough decisions to slow the spread of the infection and the number of fatalities. A calm and honest voice at a time of crisis is soothing and product. A quivering hedge fund manager is not. Mr. Ackman told the world to panic. At the same time, he said he was buying stocks. The later was appropriate as it was his area of expertise. The former was not. Ackman was human, but both he and CNBC were irresponsible to allow him to use the airtime to voice his sense of panic. It was not productive and sent markets lower. For many, it only served to exacerbate fears in a situation that is beyond all of our control.

Emotion is dangerous in emergencies

Fear and greed drive markets higher and lower. I do not blame Ackman for his fear, but his ego took over the rational side of his brain. Did he not realize that his words had significant meaning? Did he not know he was stoking panic? While his feud with Carl Icahn was entertainment, his diatribe on CNBC last week was the antithesis of what FDR taught us in his first inaugural address almost nine decades ago.

Emotions are running high these days and for a good reason. In a crisis, empathy and a proactive approach can save lives, while panic is as contagious as the virus we face.

A reasonable, rational, and logical approach

Leaders are doing their best right now, and most are looking forward as the past is only for the history books at this point. State and federal leaders in the US and around the globe are stepping up with policies of social distancing and shutdowns to slow the spread as much as possible. Central banks are shooting bazookas full of liquidity into the financial system to stabilize conditions and minimize the impact on markets until fiscal policies address some of the economic effects. Each is treating symptoms of the underlying problem. Scientists and health professionals are on the front lines when it comes to life-saving treatments and a vaccine. Science moves slowly, while the virus spreads like wildfire. Meanwhile, markets anticipate, and they hate uncertainty.

Leaders are doing everything in their power, and it is up to individuals to listen to instructions and protect themselves and everyone else. A reasonable, logical, and rational response is the only way to approach this issue. The bottom line is that panic is not productive. I have great respect for Mr. Ackman as an astute investor. When Ackman or anyone else appears on any media outlet, they should be sensitive about statements that will inflame the level of fear that is already at an unprecedented scale and is likely to rise.

Volatility will remain - flight to quality

Markets will continue to be volatile until there is are answers to the questions that can only come from science. The stock market will respond to the minute-by-minute news and may even close for a time. While they remain open, the VIX index that measures the level of implied volatility in put and call options on the S&P 500 stocks. Fear and uncertainty that sends the price of stocks lower causes people to buy price insurance or options to protect portfolios. Therefore, the VIX rises when the stock market falls, and the index serves as a barometer of fear. 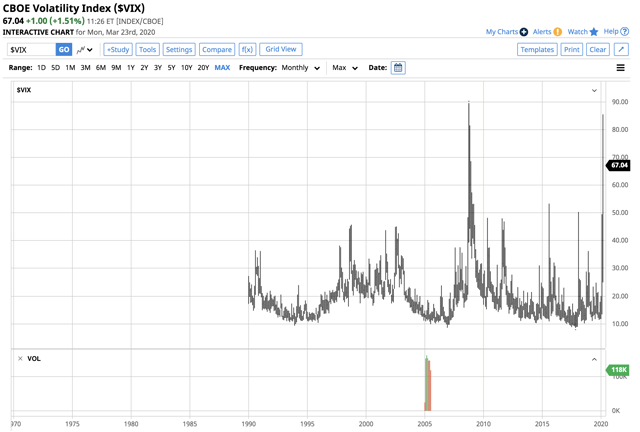 As the chart highlights, the VIX rose to a high of 85.47 last week, which was just shy of the all-time peak from 2008 at 89.53. The VIX is likely to remain at an elevated level throughout the crisis.

The top holdings and fund summary of the ProShares VIX Short-Term Futures ETF product are:

VIXY has net assets of $314.39 million, trades an average of over 6.2 million shares each day, and charges an expense ratio of 0.87%. VIXY rises and falls with the level of the VIX index.

A calm approach to the unprecedented crisis is the most logical approach. My heart went out Bill Ackman as his fear was apparent on March 18, he wore his emotions in full view of the public. However, it is everyone's responsibility to avoid spreading panic during a fearful time in history. When things get tough, and they will remember the words of FDR and ignore statements like "Hell is coming." As New York Governor Andrew Cuomo said last weekend, "words have meaning." I hope all media channels will continue to allow for freedom of speech and opinions but will protect against emotional statements that do nothing but exacerbate fear. Continue to look for that silver lining when dark clouds are overhead.