The Federal Reserve continues to fight the structural problems of the economy with cyclical tools, albeit extreme ones.

The trickle-down economy has failed again, and Congress continues to do nothing about it.

Coronavirus is an economic shock hitting at the time of a cyclical slowdown on top of the secular "slow growth forever" structural economy.

The next bigger "great currency and debt devaluation" is here ahead of schedule.

Gold stocks are levered to what will be ever-rising price of gold. Buy this one ETF in place of bonds.

On Monday morning, the U.S. Federal Reserve announced it "is committed to using its full range of tools to support households, businesses, and the U.S. economy overall in this challenging time..."

Over the past five years, I have been pointing to underlying structural problems with the economy that I call "slow growth forever." I summarized the thesis in a letter to clients in 2016.

In that letter, I stated the following regarding price shocks and cyclical disruptions:

"One of the best times to invest is after a large asset price correction due to one of these black swans or unintended consequences that drive prices down. Spring of 2009 when everybody was scared, but markets were settling was one such time. Therefore, while I will follow the biggest long-term trends, I hope to use the short-term disruptions to find opportunity for better entry prices because the lowest cost basis wins."

The coronavirus stock market crash is shaping up to be one such opportunity. Just as the Fed and government came riding to the rescue, sort of, from 2008 to 2012, they are doing so again.

The results of the interventions we are about to see are predictable. Many investors, though, will make the same mistakes they have made all along. While we will see certain asset prices inflate, history does not purely repeat, it only rhymes.

Several asset classes and industries will not participate in the coming reflation this time. That will leave many investors scrambling, as one by one they average down into oblivion, shift asset allocations, pick new holdings and many ultimately give up.

One industry poised to do very well is the gold miners. Gold is not going to spike to $50,000 per ounce or anything silly like that. However, gold will invariably rise in price due to the massive global money printing about to hit the global economy. Gold miners are levered to a rising price of gold. I strongly encourage buying the VanEck Vectors Gold Miners ETF (GDX).

The Fed Has No Choice

Years of failed trickle-down economic policy by Congress has put the Fed in a precarious position. While it could have allowed a substantial recession in order to press Congress to act on the structural problems of the economy, that is not its modus operandi.

Right now, we are seeing an economic shock hit what was a cyclically weakening economy that is built on an unsound structural foundation.

Coronavirus is likely to create more than a speed bump in the global economy. Shutting down large swaths of the economy for 8-12 weeks at a time, with it being unknown if there will be a repeat soon, is an economic hit and uncertainty that will leave a mark on top of the human toll in lives.

This comes at a time when the economy was peaking in some places and starting to turn over in others. We already had no net economic growth, as rising debt exceeded growth.

A recession was inevitable before coronavirus. As was a major stock market correction. I covered all of this in these articles:

Structurally, as mentioned above, we suffer from a "slow growth forever" problem. Aging demographics, massive accumulated debt and technological change are conspiring to upend ingrained misconceptions about economics.

The Fed is on the spot to keep the current crisis from turning into a deep and long-lasting depression. Congress can not be counted on while it is bickering over a bailout bill that does nothing to fix structural issues and barely addresses the cyclical.

So, print money is what the Fed will do. This is the first wave of "helicopter money" that I said was inevitable in recent years. I gave an interview to former SA, now hedge fund guy, contributor Brian Bain 15 months ago on this exact topic: "Helicopter Money Is Inevitable (Kirk Spano)."

Global Devaluation Of Debt And Currencies

What we are about to see is a global devaluation of debt. If you own bonds, you will want to get out of the way soon on any rallies. Not only will interest rates continue a rise that began last week, but another collapse is inevitable.

All bonds are risk. That is why the Fed is buying everything: mortgage-backed debt, municipal debt, small business debt, bank debt - if it's debt, the Fed wants it.

Almost all of the debt will be monetized over time. How fast, is the only question. There is no risk premium to own bonds from these levels.

Corporate bonds are getting a bailout. Here's why: 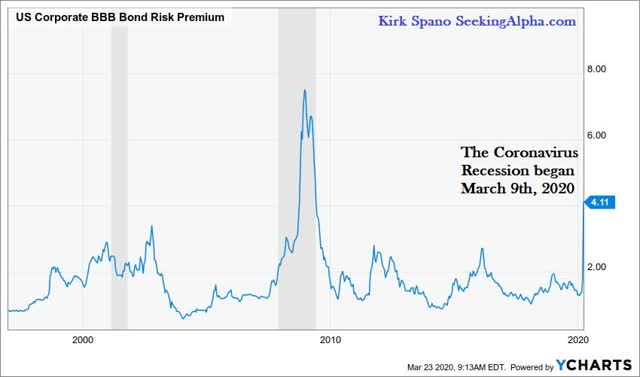 Without a bailout, corporate debt is toast as the economy "pauses."

Who wants to buy U.S. Treasuries, or debt of any country really? It's all junk.

What happens to interest rates as this "great monetezation" occurs?

The Fed Balance Sheet Is "Infinite"

Neel Kashkari, Minneapolis Fed President, said the Fed balance sheet is "infinite." Let that sink in for a minute.

The Fed balance sheet is about to see a massive expansion. It will not end well for the Fed. Within a few short years, the "end the Fed" crowd will be back and louder than ever. It will be a rallying cry for politicians intent on gaining power in order to execute their next trickle-down, big skim for themselves and patrons, ideas.

The idea that this is merely a black swan economic shock and that these debts are "money good" is a fallacy. A fallacy that the financial industry will perpetuate out of greed and stupidity while the media will also be happy to repeat ad infinitum out of ignorance in their quest for clicks and views (who reads a paper anymore?).

The reality is that "slow growth forever" is a secular structural problem that nobody is addressing. Government has been derelict for 40 years.

Eventually, the Fed will be blamed for everything by everybody. But, the reality is, it is the ultimate patsy and fall guy, for a hubris that has hit government and big business participating in "the big skim" of public resources that is inexplicably and tacitly allowed by a public that acquiesces to being robbed every single day.

Dump Your Bonds And Buy Gold Stocks Instead

Over the long run, a portfolio asset allocation of 80% equity and 20% debt has performed almost as well as a 100% equity portfolio. I doubt that will be true in the next decade or so.

As I have discussed in my webinars, about 100 to 150 companies in the S&P 500 are at risk of becoming zombie companies in coming years or flat out liquidating via bankruptcy. This will destroy bondholders as well as stockholders. S&P 500 ETF (SPY, VOO) indexers will be particularly hurt. More on that soon.

If you typically keep about 20% or more of your assets in bonds, you need to move away from that asset allocation. It is time to replace bonds. Warren Buffett has talked about bonds not being worthwhile in the long run over and over. In the environment that is about to play out in the 2020s, that will be even more true.

What can you add to mitigate risk though in place of bonds? I think the simple answer is to buy the GDX as a primary replacement for bonds. I have already covered why gold and gold stocks are in store for a massive bull market in the 2020s.

See the lack of correlation that GDX has with other assets, such as the S&P 500, the Invesco QQQ ETF (QQQ), the iShares Core U.S. Aggregate Bond ETF (AGG) and the iShares 20+ Year Treasury Bond ETF (TLT):

For those of you who are 100% in equities - Millennials, Gen Xers - gold miner stocks make sense for you as well. A winner is a winner, and you need the non-correlated asset.

Technically, the recent pullback in the gold miners sets them up as a buy right now. Margin calls in accounts drove the pullback, as brokerages needed an asset to liquidate. That pullback was a special and temporary circumstance, in my opinion. 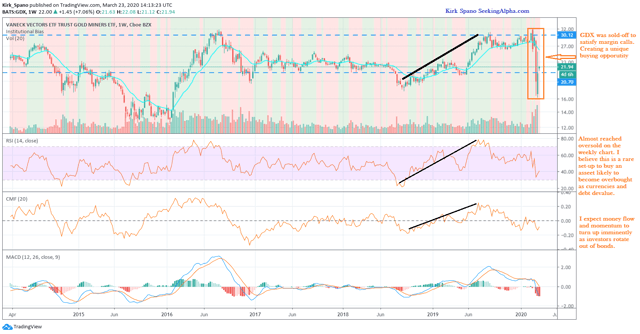 All signs point to a rally in GDX that is sustainable. Buy GDX.

What worked in the past decade won't work in the coming more volatile decade. Many dividend stocks and REITs are permanently damaged. We called for investors to raise cash levels to 50-75% earlier this year. We are now planning to be buyers again and are recommending investors rotate into a better asset allocation designed for the 2020s.

This week, get Margin of Safety Investing for 50% off at only $249 your first year. Go to Kirk Spano's profile page and send a message with "half price" in the subject line to get your discount offer.

Additional disclosure: On Tuesday nights I hold a webinar for Seeking Alpha readers. See my blog for details. --- I own a Registered Investment, but publish separately from that entity for DIY investors. Any information, opinions, research or thoughts presented are not specific advice as I do not have full knowledge of your circumstances. All investors ought to take special care to consider risk, as all investments carry the potential for loss. Consulting an investment advisor might be in your best interest before proceeding on any trade or investment.