Volatility in the dollar index.

The dollar versus the euro is not about yield anymore.

A devaluation of fiat currencies.

The dollar is king - gold is the ultimate foreign exchange instrument.

The international currency market is a bit of a mirage. Like an oasis in the desert, the US dollar has been the king of the asset class. A flight to quality in a risk-off environment has caused the value of the greenback to rise against other foreign exchange instruments. As the world battles a faceless, microscopic, and deadly enemy markets have suffered the worst losses since the Great Depression in the US in the 1930s. In only one month, a black swan event has changed the world. As of March 24, the primary concern is health and limiting the loss of life caused by Coronavirus. The attack of the bug has caused incredible damage to the global financial system. Central banks and governments are pumping stimulus into markets to buy time until scientists come up with a treatment and vaccine. Markets move a lot quicker than science, which is wreaking havoc across all asset classes, and the foreign exchange arena is no exception.

The dollar may be the best-performing currency these days, but the oasis in the desert may only be a mirage. The Invesco DB Dollar Bullish Fund (UUP) and its bearish counterpart Invesco DB US Dollar Index Bearish Fund (UDN) reflect the price action in the dollar index.

Volatility in the dollar index

The dollar index is an instrument that measures the US currency against the other leading reserve currencies held by central banks. The index trades in the Intercontinental Exchange and contains the following exposure:

As the outbreak of Coronavirus initially spread past the borders of China in February, the dollar index fell sharply.

As the weekly chart shows, the index fell from 99.815 during the week of February 17 to a low of 94.61 on March 9. As fear and uncertainty gripped markets across all asset classes, the dollar exploded higher, reaching its most recent peak of 103.96 on March 23. The price action in the dollar index sent the measure of weekly historical volatility from below 3% in mid-January to 14.33% on March 24.

The dollar versus the euro is not about yield anymore

At the beginning of the risk-off period, the unwind of a cash and carry trade that had market participants long the dollar and short the euro to take advantage of the yield differential and strength in the dollar cause the dollar index to decline. Before the US Fed cut rates by 50 basis points on March 3, the differential stood at 2.00%-2.25%. At the same time, the dollar was making higher lows and higher highs against the euro, which made the cash and carry trade profitable from both the yield and capital growth sides. However, fears that falling US rates would cause the dollar to fall caused some market participants to close risk positions by selling the dollar and buying the euro.

As it turned out, Coronavirus swept across Europe causing countries to shut down. The death toll in Italy rose above the number of fatalities in China. The US Fed cut the Fed Funds rate to zero, pushing the yield differential to only 50 basis points as the ECB did not push short-term rates further into negative territory. However, the dollar exploded higher as the currency markets are ignoring yield in the current environment, and looking for safety, lifting the dollar index to its highest level since 2002.

As the quarterly chart shows, the dollar index traded to just shy of 104 on March 23, a level not seen since 2002. If the index closes above the 99.305 level on March 31, it will put in a bullish reversal trading pattern on the long-term chart.

When it comes to the other currencies, the dollar is king.

Emerging market foreign exchange instruments went into the risk-off environment weak. Over the past month, the vulnerable got a lot weaker. 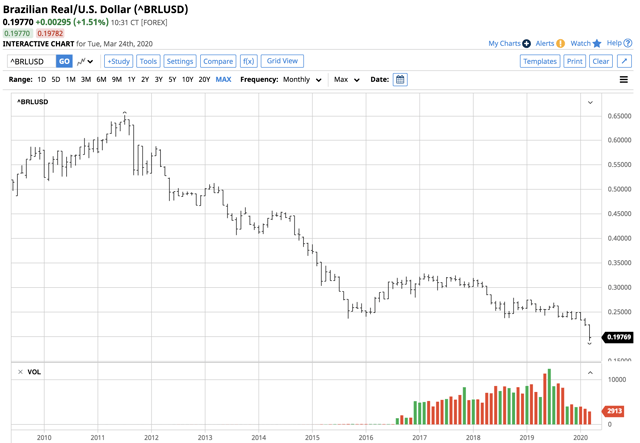 The chart of the US dollar versus the Brazilian real shows that the Brazilian currency fell to a new low against the greenback as the foreign exchange instrument from South America's leading economy declined below the $0.200 level for the first time. 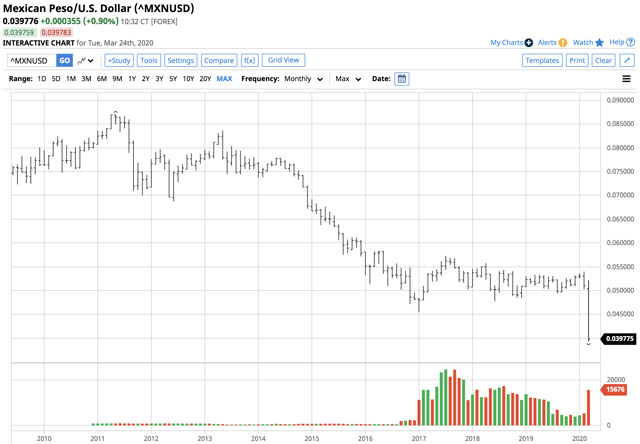 The value of the Mexican peso tanked. 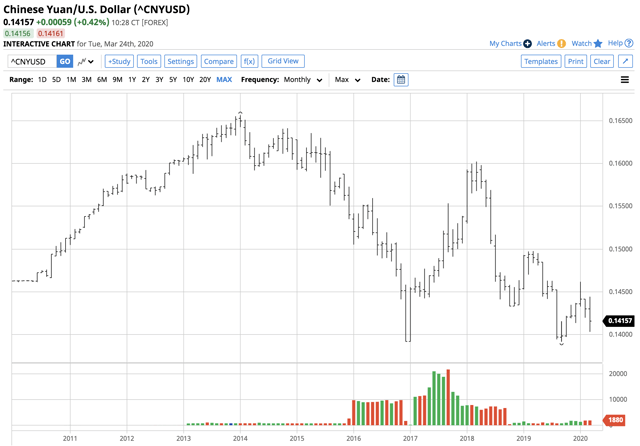 The Chinese yuan is near the low against the US dollar. 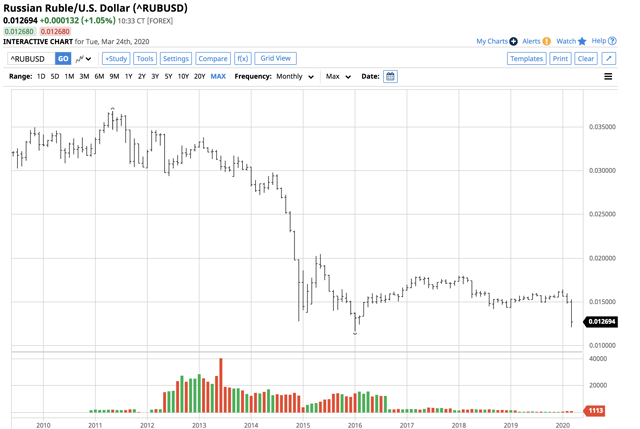 The same goes for the value of the Russian ruble and most other world foreign exchange instruments.

A devaluation of fiat currencies

Fiat currencies derive their value from the full faith and credit of the countries that issue the legal tender. Since Coronavirus has turned out to be an event that is beyond black swan, confidence is declining as the number of cases and fatalities around the world rise. Moreover, with the global economy at a halt and people around the globe locked in their homes, governments have turned to unprecedented stimulus packages in the form of lower interest rates, quantitative easing, helicopter money, and bailouts to keep economies afloat. The tidal wave of liquidity impacts the credit side of the equation when it comes to the value of currencies.

Over the past months, while the dollar has been the king of the foreign exchange arena, the world's oldest currency, gold, has been the monarch of money. Gold rose to a new record high in almost all currencies except for the dollar and the Swiss franc, but it has still appreciated in dollar and franc terms. The price action in the gold market is telling us that the US dollar strength is little more than a mirage and that the greenback is the healthiest horse in a global glue factory.

The dollar is king - gold is the ultimate foreign exchange instrument

King dollar could continue to rally over the coming weeks and months, but the price tag for the stimulus that will continue to push deficits to levels never anticipated will support gains in gold. It may only be a matter of time before the yellow metal breaks to a new peak in Swiss francs and climbs above $2000 per ounce in US dollar terms.

At the same time, the dollar should continue to attract the flight to quality buying in this environment. The most direct route for a risk position in the dollar index is via the futures that trade on the Intercontinental Exchange or via the over-the-counter foreign exchange market. For those looking to take risk positions in the dollar index without venturing into the futures or OTC arenas, the Invesco DB Dollar Bullish Fund and its bearish counterpart UDN provide an alternative.

The fund summary for UUP states: 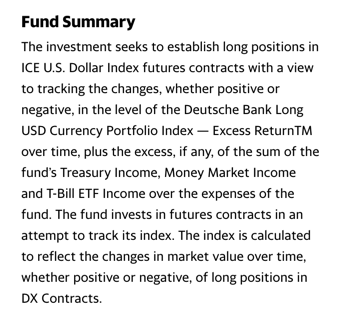 The fund summary for UDN states: 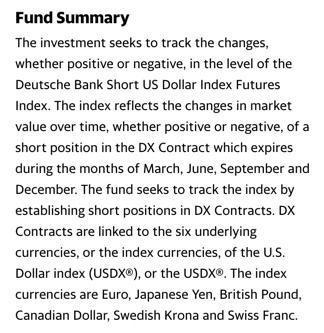 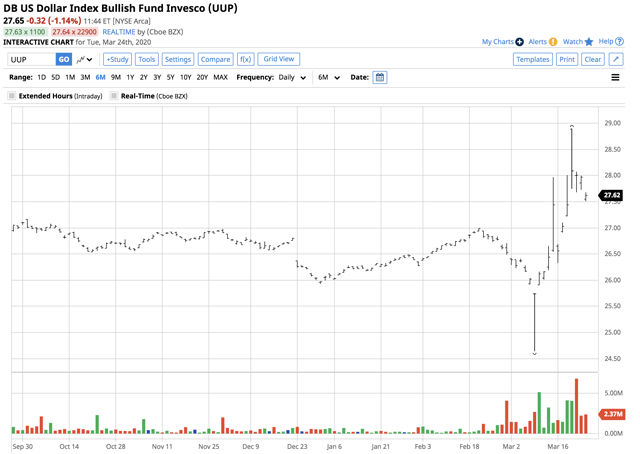 Over the same period, UUP moved from $24.64 to $28.90 per share or 17.3%. In risk-off conditions, dislocations in derivative markets can become the norm rather than the exception.

The dollar is the strongest currency in the world, but that is nothing more than a mirage. Gold is the ultimate currency, and liquidity will likely be rocket fuel for the yellow metal when the dust settles.

The author is long gold

Follow Andrew Hecht and get email alerts
+
Add a comment
Disagree with this article? Submit your own.
To report a factual error in this article, click here.
Your feedback matters to us!