Enterprise Products Partners is well-positioned to handle the current downturn in the oil market with minimal disruption of its business.

The company is one of the largest midstream companies in the country, with pipelines stretching to every major resource basin.

Its business model is insulated from energy price fluctuations and consists of long-term contracts with very high-quality customers.

The company has significant growth potential due to the growing demand for both oil and natural gas globally over the next two decades.

The market has dumped the company and it now boasts a 13% yield that it can easily cover with cash flow, presenting an opportunity.

On Wednesday, March 18, 2020, midstream energy giant Enterprise Products Partners (EPD) released a presentation to its investors discussing the current situation, which is rather timely given the current situation in the markets. As is usually the case with presentations like this, the company devoted a great deal of effort towards making an investment thesis in itself and discussing where it fits into its industry. Unlike most presentations though, the company did not go particularly in-depth regarding its operations nor did it discuss its future. Rather, it appears that the purpose of this was to calm worried investors in the face of the market action surrounding the company lately. Admittedly, there are a lot of reasons for investors to remain calm with regards to this company and it may even offer an appealing opportunity for investors that do not currently have a position in the partnership to buy in.

Enterprise Products Partners is one of the largest midstream companies in the United States. The company boasts more than 50,000 miles of pipelines carrying natural gas, crude oil and other liquids, and even refined products. The company also owns a sizable amount of both oil and natural gas storage, natural gas processing plants and fractionators, and condensate distillation facilities. Enterprise Products Partners is also a major player in the import/export market as it owns eighteen shipping docks handling a variety of fossil fuel-based products. 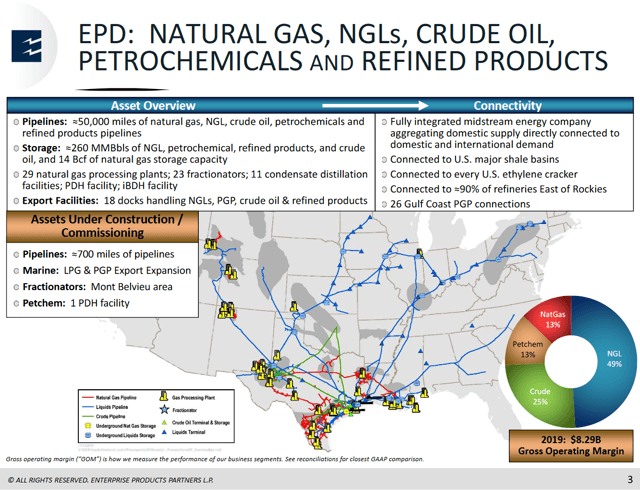 As we can see above, the company's pipeline network extends to essentially every basin in the nation in which natural resources are produced. This is beneficial for the company because different basins have different fundamentals. An obvious example of this is that it is significantly cheaper to produce oil and natural gas in the core areas of the Permian than it is in the Bakken shale. We have already seen drilling operations cut back in some high cost areas and this may have some impact on volumes coming from those areas. As Enterprise Products Partners has its operations spread among many different basins, it reduces the impact that such a slowdown would have on the company as a whole.

As already mentioned, Enterprise Products Partners is a fully-integrated midstream company. The company is capable of performing all of the necessary tasks to bring the resources from the oil and gas fields to the market except for refining. This gives it a number of advantages. One advantage is that the company is able to extract a fee for every step along the way. Thus, it is somewhat better equipped to maximize the amount of revenues that it receives from the resources that move through its network than some of its peers. We can see this here: 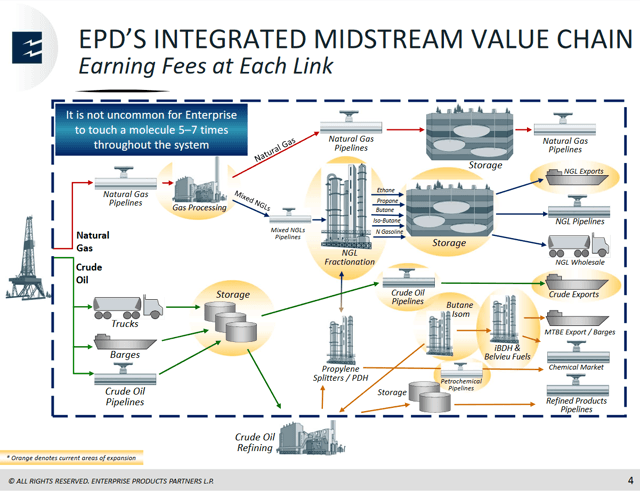 There are few other midstream companies that are similarly well-equipped to perform every step in the midstream value chain, although many of the larger ones are. Aside from maximizing the amount of value that the company can extract from the resources that it transports, the fact that Enterprise Products Partners can perform everything needed to get the resources to market may also give it an advantage when competing for contracts. This is because a customer wishing to do a fee-based contract may want to minimize the number of midstream companies that it does business with. A midstream company that can perform everything like Enterprise Products Partners is the logical solution to this problem.

One of the things that has caused the market to worry about midstream companies like Enterprise Products Partners is the recent fall in oil prices. As we can see here, the price of crude oil has plummeted since the start of the year, going from $61.18 in early January to $24.17 today.

This has caused the market to dump anything energy-related. This includes midstream companies despite the fact that their business models are somewhat insulated from commodity price fluctuations. We saw the same thing happen back in 2014-2016 as a result of the Saudi war on American shale. However, Enterprise Products Partners has historically managed to deliver consistent results regardless of oil prices. We can see this here: 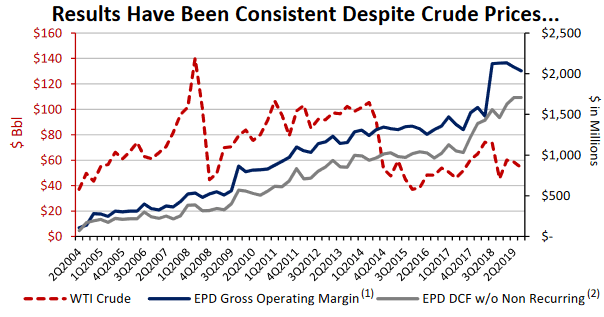 We can clearly see that the decline in oil prices during the middle of the last decade had a negligible effect on Enterprise Products Partners' results. The same is likely to be true during the current one. This is due to the business model that it has. In short, Enterprise Products Partners conducts all of its business under long-term contracts with its customers that are either fee-based or take-or-pay contracts. In the case of fee-based contracts, the customer simply pays a fee for each unit of liquids or natural gas that moves through its infrastructure. A take-or-pay contract is different as it involves Enterprise Products Partners purchasing the resources at one end of its system and selling them to a customer at the other end with a mark-up (the customer must purchase the resources or pay a penalty). This business model means that the company's financial performance is much more dependent on volumes than on energy prices. At this point then, some readers may be concerned about declining volumes given that some shale producers are cutting back on drilling in response to the low price of oil. Fortunately, these contracts also typically have minimum volume guarantees that the customer must fulfill or pay for anyway. Thus, even in the face of declining upstream production, Enterprise Products Partners' revenues should not be affected too much.

Of course, if the counterparties to these contracts cannot remain solvent in the current environment then the contracts are not really worth the paper that they are printed on. As such, we want to have a look at the quality of the partnership's customers. Fortunately, they appear to be mostly high-quality companies. We can see this here: 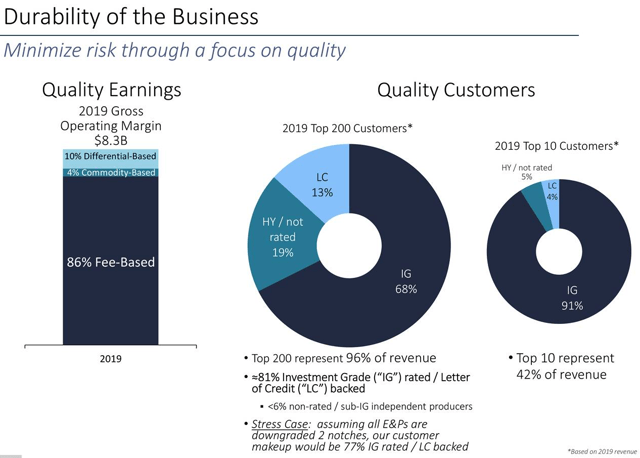 As we can see, approximately 81% of the company's revenue comes from either investment-grade companies or from companies for which a bank has guaranteed payment on the contract via a letter of credit. As these entities are very strong financially, they are likely to be able to weather through the current economic conditions without becoming insolvent. Indeed, if we look at the stress case above, we can see that even in a worst case scenario, the overwhelming majority of the company's customers would still be able to make good on their commitments. Thus, we can clearly see that Enterprise Products Partners should easily be able to weather the current crisis without being too affected. Thus, the market selloff appears to be unwarranted.

Enterprise Products Partners has a long history of delivering growth in both cash flow and distributions regardless of fluctuations in oil prices. This is clearly shown here: 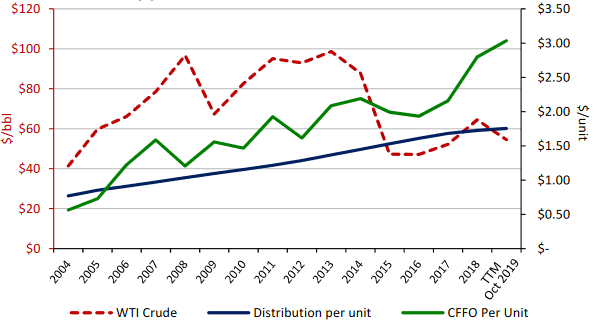 What is more, the company is likely to be able to continue to deliver growth well into the future. One major reason for this is that the demand for both oil and natural gas is likely to grow globally over the coming years. Here we can see the International Energy Agency's projections for global oil demand over the next two decades: 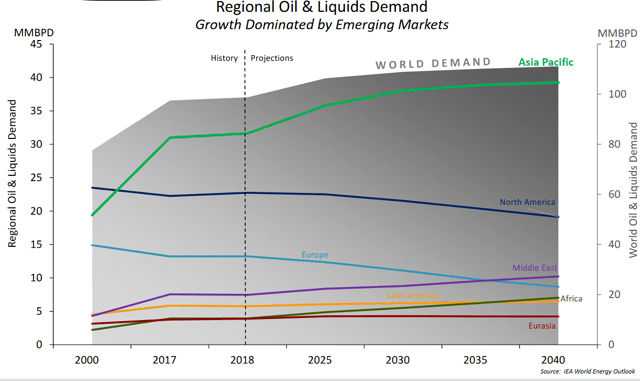 We can clearly see here that the agency predicts declining demand for oil in the developed markets. This is something that has clearly worried many investors in the space, as evidenced by some of the articles and comments that have been published on this site. However, the declining demand from developed markets will be more than offset by growing demand in the emerging markets of Africa and Asia as they bring their economies online. Overall though, demand growth is certainly expected to be mild compared to renewables over the same period. 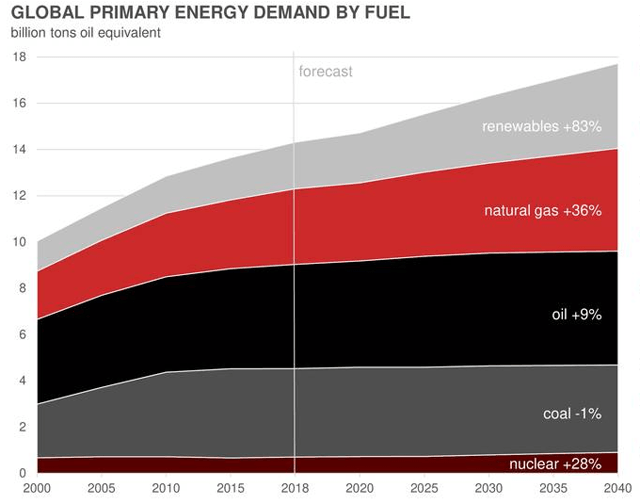 Despite all that the partnership has going for it, the market has obviously turned against it. As we can see here, the common unit price has gone from $29.26 six months ago to $13.29 today. This is a 54.58% decline: 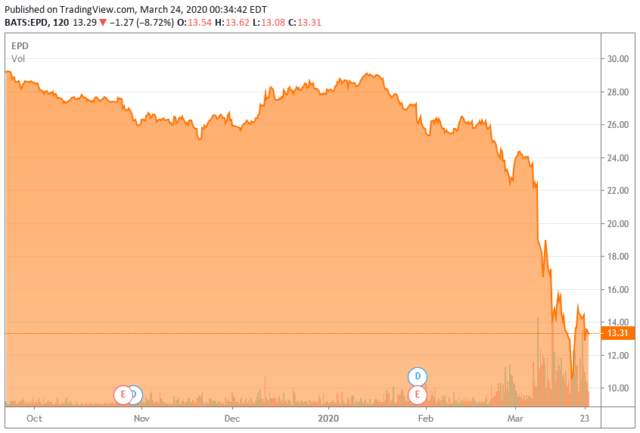 This has naturally had the effect of pushing the company's yield up. As of the time of writing, the common units yield 13.39%. As is always the case though, it is critical that we ensure that the company can actually afford the distribution that it pays out. This is because we do not want to be the victims of a distribution cut. The usual way to do that is by looking at a metric known as distributable cash flow, which is a non-GAAP financial figure that theoretically tells us the amount of cash flow generated by a company's ordinary operations that is available for distribution to the partners. In the fourth quarter of 2019, Enterprise Products Partners reported a distributable cash flow of $1.634 billion but it only pays out a total of $968.700 million in distributions. Clearly then, Enterprise Products Partners is generating more than enough money to cover its distribution and still have a significant margin of safety left over. Thus, this distribution appears to be quite safe.

In conclusion, Enterprise Products Partners appears to offer a very interesting opportunity right now for an investor seeking income that can stomach the likely near-term volatility. The company is very well-positioned to handle whatever might come and does not need to rely on the markets to finance its forward growth. When we combine this with its forward growth potential, there is obviously a very real chance to make a good investment here.

Follow Power Hedge and get email alerts
+
Add a comment
Disagree with this article? Submit your own.
To report a factual error in this article, click here.
Your feedback matters to us!