Shell hasn’t cut their dividend since 1945 and is currently boasting a 15% yield.

The company is taking steps to maintain their financial stability to avoid cutting it.

The company’s share price decline due to the oil price collapse is undue considering their diversification.

It’s a great time to get in to Shell!

Shell’s share price collapse has led to a great buying opportunity a yield of over 15%. The company has taken swift action to maintain financial stability and preserve free cash flow. With the world's second-largest natural gas business, Shell is the best-positioned supermajor to weather the oil price collapse. Considering this, Shell’s recent selloff seems overdone and like a prime buying opportunity. 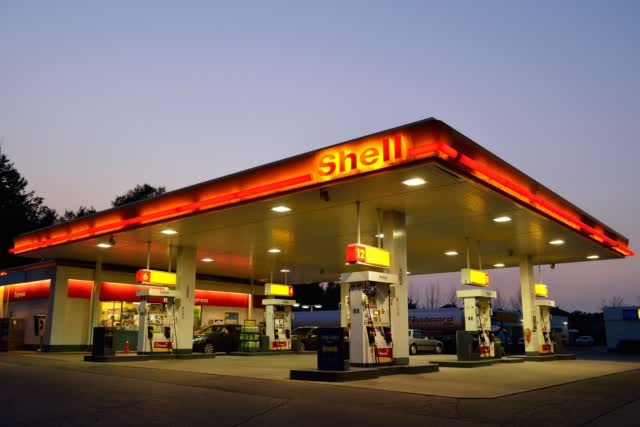 Shell hasn’t once cut their dividend since 1945, and they aren’t about to start. Shell’s dividend yield recently jumped above 15%, a record high - and the highest of any supermajor. This is an amazing opportunity for investors wanting to generate income.

Last year, the company spend $15.2 billion dollars on dividends, not an insignificant sum. In the current oil price environment of ~$25 dollars/barrel, Shell’s earnings will undoubtedly take a hit

Thankfully, the company seems to be doing everything it can to save from cutting the dividend. The company's balance sheet looks strong enough to support the current payout in this environment. The company currently has $20 billion in cash - more than enough to cover the dividend - and an additional $10 billion in available credit lines. Though the company has a large amount of debt - $96 billion to be exact. This remains manageable, largely due to the low-interest rates available to the company.

Let's take a worst-case scenario and assume they did cut the dividend. Even if they cut the dividend payout by 50%, an investment at these prices would still be a nearly 8% yield, and any cut would likely be temporary. I also strongly believe that if management cuts the dividend it will be because they find a more useful employment of that money under these extraordinary circumstances - quite possibly using it to purchase assets at rock bottom prices.

Shell’s response to the recent collapse in oil prices has been a quick cut in expenditures to try and maintain financially stable. In a recent press release Shell outlined the following goals in response to the new price environment:

These measures are expected to generate an additional $8-9 billion in free cash flow, which will help Shell maintain financial stability. In addition to these actions, Shell will be suspending its buyback program after this current tranche, which will also contribute to its financial flexibility. The company has stated that:

We will continue to review the dynamically evolving business environment and are prepared to take further strategic decisions and consider changes to the overall financial framework as necessary.

This means that we should not rule out the possibility of a dividend cut further down the line if the oil price war persists, but I find it highly unlikely. The speed with which Shell announced these cuts speaks to their dedication to their shareholders in maintaining that dividend payment, which I believe was the main purpose of the press release – assuaging the concerns of a potential cut.

A significant benefit for Shell in this oil price environment is its diversification.

Shell’s upstream segment – which will be most directly affected by the lower oil price – composes the smallest part of the company’s income. This isn’t to say the other segments won’t be affected – they most certainly will – but they will be able to help cushion the direct blow on earning. The largest portion of earnings came from integrated gas in 2019 and we can expect the same in 2020. Though Brent Oil has fallen 60.41% year to date, natural gas prices have only fallen 26.9%. This suggests that earnings from this segment will be lower, but not significantly lower, than last year. Total gas volumes should be up year over year, with significant gas projects such as Prelude FLNG coming online last year.

Gas has been seen as a weakness of Shell during the past couple years as its price remained depressed among a glut of supply, but now among an utter collapse in oil prices, Shell’s diversification into gas is a bright spot. The company’s gas division has proven profitable even at low prices, and this year should be no different. As China begins to recover from the coronavirus, gas prices should pick up along with demand.

The second-largest threat to Shell is the demand-suppressing wonder that is a global pandemic. If the virus remains a threat for a longer period - think a year or longer - it will begin to have an even more significant impact on the global economy, and as a result Shell's earnings. Potentially, a ramp-up in the spread of COVID-19 could lead to refineries, rigs, and other plants closing; significantly damaging revenue.

The main risk here is that lower demand, due to nearly everyone staying home, will keep prices suppressed for a while. This is doubly deadly in conjunction with the existing oil war between Russia and Saudi Arabia.

There is good news here and once again it's Shell's natural gas business.

Natural gas is unlikely to suffer the same demand shock as crude oil because over 50% of its usage, in the United States, comes from residential consumption and electric power production. If anything - with people getting comfortable in their homes, streaming movies, and running the backup fridge full of quarantine supplies - the residential and electrical demand should pick up. Admittedly, industrial and commercial consumption will likely fall - and probably has already - but the residential demand is a cushion and will likely offset lost demand to some extent as people set themselves up to work from home.

Comparing those numbers to oil makes you appreciate the fact that Shell is the world's second-biggest natural gas company. In the US, only 4% of oil is used for residential or electrical purposes. Sixty-nine percent of oil consumption is by transportation - one of the areas most directly impacted by a shelter in place order. Out of the supermajors, Shell is best prepared to weather this storm, both with management taking actions to weather the storm and with the least direct exposure to the oil price collapse via its massive natural gas segment.

The largest remaining risk here, one that I find almost laughable, is that this crisis leads to nationalization. Though Shell will likely benefit from ECB aid, I see no situation in which the Netherlands or the EU sits down with the UK, they reach an agreement, and then go and tell Shell they're now state-owned and run through a UK-EU international body. Due to the multi-national nature of Shell in particular, especially after Brexit, I would assign a near 0% risk to Shell getting nationalized. More likely, some of Shell's assets could get nationalized in other countries, but this too is unlikely considering their status as a large employer in many places, as well as the international ire those actions would draw.

Shell’s shares are trading at just above book value, a level they have not seen in recent memory. Though if oil prices remain depressed, their book value will likely take a hit. It’s difficult to project the company’s forward earnings in this environment, but the 15% yield speaks for itself – if you believe in Shell’s resilience, then this is an opportunity to invest at rock bottom.

With the company’s diversification in mind, let's examine Shell’s trading pattern relative to the price of oil. 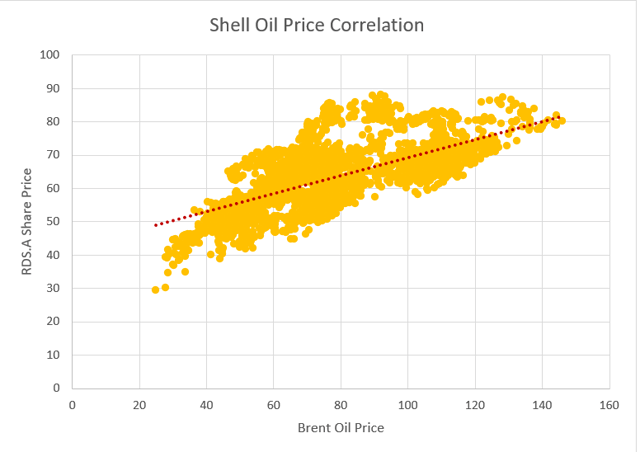 The above chart displays the correlation between Shell’s share price and Brent oil prices between March 20, 2006, and March 18, 2020. The correlation coefficient of Brent oil and Shell’s shares since 2006 is 0.7125, meaning 50.7% of the movement in Shell’s share prices can be explained by the knowing the Brent oil price and using a least squares regression line. On average, a $1 movement in Brent causes a $0.27 movement in RDS.A. Considering that in 2019 only 55% of Shell’s earnings come from oil-related activities, significantly less than before their BG group acquisition, perhaps this correlation has decreased over time. In fact, it has been quite the opposite.

Year to date, shell’s correlation with oil prices has been .9694, dropping nearly in line with each other - meaning 93.97% of the drop can be explained by Brent's movement (this steep drop is on the left of the above chart). This seems overdone, considering Shell is not a pureplay upstream company. A significant portion of their revenue comes from natural gas and won’t decline to the same degree as the price of oil. The takeaway here is that Shell’s correlation with oil prices has increased to an undue level - diversification means its income is not completely reliant on oil prices – and the company’s shares are significantly undervalued at the current price, especially considering its attractive dividend.

Shell’s earnings will be impacted by the low price of oil, but that doesn’t mean the company itself is unworthy of investment. The company is the best-positioned out of any of the supermajors to survive this period. The company has the largest gas segment out of any supermajor - which will be less impacted by the oil price environment - as well as a trading arm and significant downstream operations that can hope to capture some value from these fluctuations. The company has taken measures to ensure its financial survival and its ability to keep the dividend. Long-term investors can lock in a 15% yield by investing now while shares are extraordinarily cheap and capture value from share price appreciation along the way. In short, Shell's management knows what they're doing and will do all they can to protect the dividend, furthermore, out of all of the supermajors, Shell offers the highest dividend the most insulation from the collapse in the oil price. Shell is the best oil investment right now and their shares are frightfully cheap.

Special thanks to David Custer for assistance with the statistical analysis of Shell's shares and Brent oil prices.

Disclosure: I am/we are long RDS.A. I wrote this article myself, and it expresses my own opinions. I am not receiving compensation for it (other than from Seeking Alpha). I have no business relationship with any company whose stock is mentioned in this article.

Follow Sunset Analysis and get email alerts
+
Add a comment
Disagree with this article? Submit your own.
To report a factual error in this article, click here.
Your feedback matters to us!