Gold mining companies fair pretty well during a gold bull, but your mileage may vary.

The majors tend to do better overall, but some of the juniors will really jump when gold price rises.

Overall exposure to gold stocks can be healthy, but only when you pick solid companies with growing cash flow and good management.

Economic factors are very bullish for gold, and investors may find more safety investing in the physical metal.

The GDX is trading substantially below the Great Recession lows in 2008. As the recession progressed and gold prices eventually rose, so too did the miners who produce the gold. Miners, depending on their efficiency in producing revenues over their cost of mining, enjoyed substantial leverage to the gold price. Oftentimes, major gold miner stocks may appreciate between 2 and 10 times the amount of the gold price increase. That is the attractiveness of owning quality gold stocks in your portfolio.

While gold rose about 40% between 2008 and 2010, GDX rose 89%. On the other hand, gold continued to rise in 2011 to $1900, while GDX faltered and begun its long descent to the mid-$20's levels it has been range-trading around since 2013. Clearly, investors began to sell their gold stocks ahead of the peak in gold price at about the same time the gold companies were beginning to mis-allocate funds on bad projects, causing an increasing distrust in the sector for generalist investors. From a Forbes 2013 article:

In total, gold mining companies spent $45 billion on projects and acquisitions since 2010 with another $15 billion of spending still scheduled, but gold output has declined to 17.4 million ounces from 18 million ounces in 2010. Deutsche Bank put out a report recently called “The End Of Big Gold?” questioning if the big capitalization North American gold producer model is “fundamentally broken.” The report pointed to the rise of resource nationalism and tax grabs, accounting measurements that mask true operating costs, an overreliance on equity issuance to fund capital expenditures and acquisitions - and huge cash pay packages to gold mining CEOs that have nothing to do with share performance.

Indeed, 2014 was a low point for the gold mining sector with GDX trading at about $20, less than a third of its 2010 peak. What we learn from this is that the miners have substantially higher risk than owning the physical metal itself. On the other hand, well-placed investments in the sector can still lead to handsome gains.

Given that we are entering what appears to be a health-driven economic crisis that is turning into another financial crisis, we are seeing a steep increase in gold prices, which is reflected again in the GDX chart. In reality, the GDX has been gaining since the last stock correction in late 2018, indicating that a sustained interest from generalist investors has begun to emerge in major gold stocks. 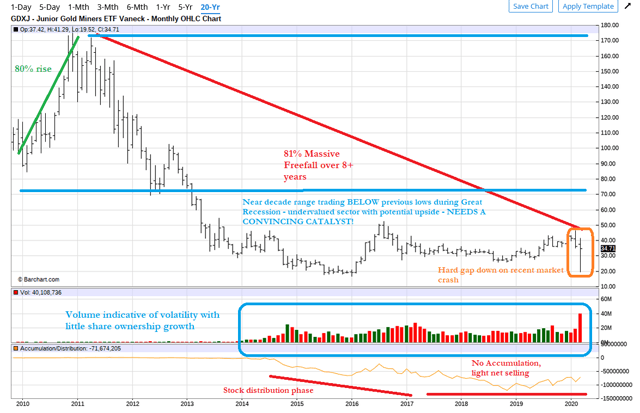 The gold junior market has quite a different story, as you can see in the chart above. Since late 2010 highs, juniors have begun to sell off massively, touching a bottom in 2016 and revisiting that bottom during the current stock-driven market crash. Gold juniors, unlike gold itself, are not a safe haven during times of crisis. It is true that when gold prices rise, gold juniors often rise along with that, sometimes over 10 times more than the precious metal itself does.

However, the chart action indicates that gold juniors are much more of a hit-and-miss sector than the majors, and certainly are more volatile than owning physical gold. Picking the right company here can substantially enhance your portfolio, whereas picking the wrong ones can also decimate it.

The gold juniors have not followed the majors in rallying 25% since the Q4 2018 stock market correction, instead trading slightly up and then coming crashing down during the latest stock market selloff. Juniors are more susceptible in the last 10 years to the broad market selloffs without the upside of the broad gains the major stock markets have enjoyed during that same time frame. Does this mean that you should not own gold juniors?

No, certainly some well-placed investments in extremely efficient junior minors can provide handsome rewards in a physical gold bull market. However, finding those companies can be like throwing a dart in a stiff wind at a small target - you are more likely to invest in a lemon rather than one that produces sweet lemonade.

Where Gold Stocks Go From Here

Gold stocks have the potential for very handsome returns, as gold looks like it has entered the last major phase of a maturing, multi-decade gold bull market. If you are looking for the leverage that gold stocks can provide the price of gold, now would be an ideal entry point into the sector. Both indexes, as outlined above, are trading substantially below the previous lows observed from the Great Recession. This indicates broad disinterest in the gold mining sector at a time when one of the greatest broad stock markets and one of the greatest bond bull markets look like they are expiring at the same time.

Bullish conditions for gold include historical levels of negative interest rates, debt levels at both the consumer and sovereign level, looming defaults in major industries such as aerospace, hospitality, travel, energy, and banking, as well as spreading recessionary indicators across the world economy. While the flight to US Treasuries and the dollar continues unabated, it is likely that the low bond yields and scarcity of US dollars both lead to an eventual massive flight to an undervalued sector such as gold. Indeed, gold has been a stalwart store of value for 5000 years, and it appears that it is time for the metal to shine very brightly again.

Therefore, owning gold stocks seems like an equally good idea, provided you are picking quality companies with good track records and profitable mines. While I expect the overall gold market indexes, both juniors and majors, to improve as gold rises, I also fully expect there to be a handful of companies on both levels that receive the lion's share of the investment gains.

Follow Robert Kientz and get email alerts
+
Add a comment
Disagree with this article? Submit your own.
To report a factual error in this article, click here.
Your feedback matters to us!