AEO is trading at all-time lows since the 2008 financial crisis.

I believe there is a huge disparity between perception and reality, with current market prices implicitly pricing AEO for bankruptcy.

The potential value of Aerie is not dissimilar to the current consolidated market value of AEO, suggesting buying stock at current levels essentially gives you the traditional business for free.

Stress testing the model suggests a valuation with minimal downside.

Coupled with a 7.5% estimated dividend yield, I believe there is an excellent margin of safety for entry.

Recent Coronavirus fears coupled with a slew of headwinds have driven American Eagle Outfitters (AEO) stock to exceptionally low levels. In essence, my thesis does not revolve around discrediting the headwinds present but rather that the assumptions currently priced in are overdone, with implicit assumptions pricing the stock for bankruptcy. From a valuation perspective, I believe the stock is extremely cheap at current levels.

American Eagle Outfitters, Inc. operates as a specialty retailer that provides clothing, accessories, and personal care products under the American Eagle and Aerie brands. They currently operate in 3 main segments: 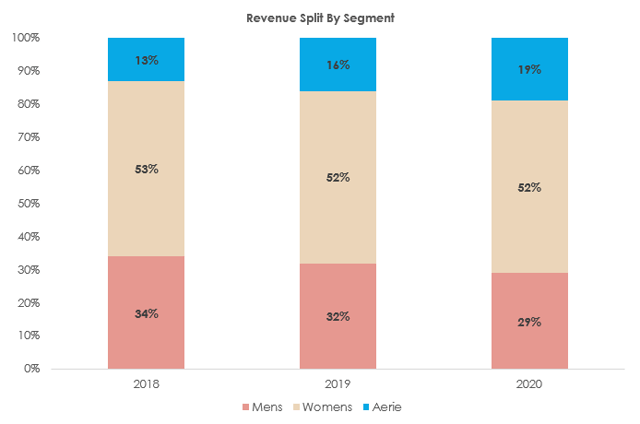 As observed, 81% of AEO’s sales still come from their traditional business segment but the share of revenue attributable to Aerie has been steadily increasing over the years. In fact, Aerie sales have been growing at a c.20% CAGR over the last 5 years as compared to the traditional segment that has been relatively flat in terms of growth. 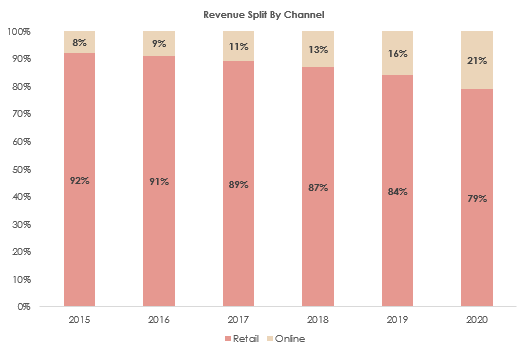 The E-Commerce channel has also been robust and growing due to omnichannel efforts, with E-Commerce sales accounting for about 21% of total sales. However, it is to be noted that AEO’s e-commerce channel yields approximately the same margins as their retail channels. 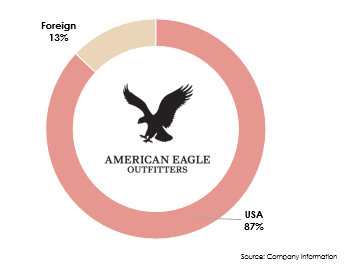 Additionally, a large chunk of AEO’s sales come from the USA.

Despite the shift towards e-commerce channels, retail channels are still the preferred channel for consumers. 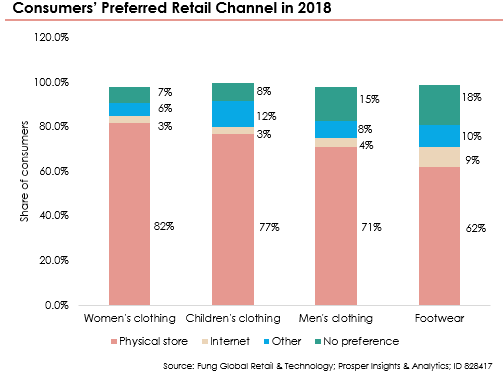 Additionally, AEO is the market leader for females apparel and the 3rd largest supplier of men’s clothing.

In addition, AEO is also one of the leaders in E-Commerce sales, with over 1 billion in sales attributed to E-Commerce. 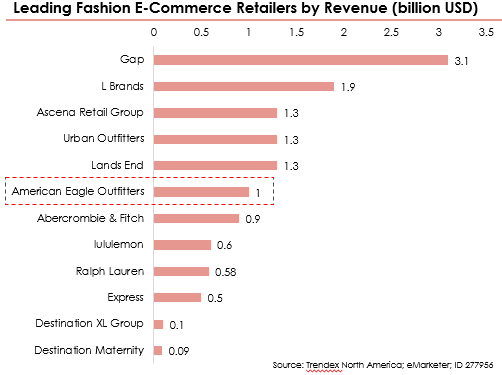 Before moving into the bull thesis, I believe it is prudent to first address the bear thesis to know what you are betting against. In essence, the bear thesis consists of fears of margin pressure despite robust Aerie growth and negative industry sentiment that has recently been further exacerbated by Covid-19 fears.

In recent years the ‘retail apocalypse’ caused by the shift in consumers purchasing preferences from traditional brick and mortar stores to the e-commerce channels in America has plagued players in the industry, with retail store sales falling drastically.

This has led to the closure of many fast fashion retail giants like Forever 21, Aeropostale and Diesel. Other fast fashion retail players have similarly begun to feel the pinch, with an increasing number of net store closures (with the exception of AEO that is net opening due to Aerie expansion).

This consequently led to falling share prices across industry players. Given the relative correlation in share price movements, it is evident that the market hasn’t exactly been the biggest fan of fast fashion retail operators in the last year.

Given the current Covid-19 jitters in the market, foot traffic is (fairly) projected to slow as people prefer to stay home, dealing a huge blow to retailers due to the large amounts of fixed costs they have (rental expense) as well as the risk of inventory obsolescence (which are usually cleared via heavy discounting that can severely impact margins).

As a further insult to injury, AEO operates in an industry that is incredibly susceptible to promotional activities and markdowns with minimal pricing power. Meaning that they are forced to price their apparel at similar prices to competitors such as ANF. As previously mentioned, this practice hurts margins which consequently affects profitability of the company.

With all these headwinds bombarding AEO, it is of no surprise that the street is underweight on the stock, as seen from various sell-side reports: 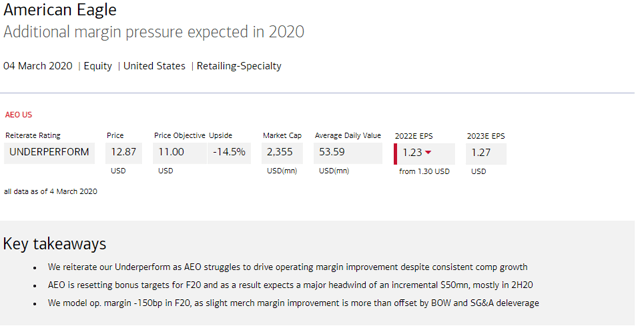 A DCF valuation with conservation assumptions as shown below yield a 68.2% upside from current levels using the GGM and a 93% upside using the EMM. (A conservative WACC of 12% was also used in the calculations.)

How low can AEO go?

In order to approximate the worst-case scenario, I stress tested my various DCF assumptions. The key assumption inputs of my model stress test are as shown below:

As a result of these assumptions, the implied stock price seems to hover around current stock price levels ($7.83 at the time of writing this article), reflecting the sheer magnitude of bearishness that has been baked into the stock.

The implicit consolidated gross margin assumptions implied at current stock price also seems to be very similar to that of Aeropostale before they declared bankruptcy in 2016.

Analyzing other retail giants that went bankrupt such as Forever 21 and Aeropostale, one would come to realize jarring similarities in the businesses during their twilight years:

However, I believe that AEO’s current predicament deviates far from that of previously bankrupted peers given robust sales growth in recent years driven by the Aerie brand. Margins have also been relatively stable while they boast a pristine balance sheet with no debt (contractual operating lease obligations have also been accounted for in the stress test above).

Customer interest in the brand can often be tricky to put a number to, hence, in order to approximate this, I used Google trends as a proxy to brand interest.

As seen above, in the years leading up to the collapse of the 2 aforementioned brands, customer interest fell steeply. In comparison, I believe that AEO has done a good job maintaining brand interest with a 5-year search CAGR of 1.97% whereas peers such as ANF have declined at a CAGR of -11.09%.

As such, I am of the view that it is unlikely that AEO would have to file for chapter 11 anytime soon (can’t say the same about (NYSE:ANF)), and hence it is irrational that they should be priced as if they should.

Aerie – How valuable is it?

Something that I believe most investors are currently overlooking is the Aerie segment of the business. 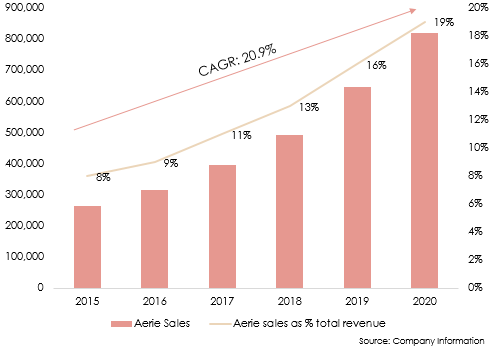 In recent years, sales from the Aerie segment have been exploding, with sales growing at a CAGR of 20.9% in the last 5 years. 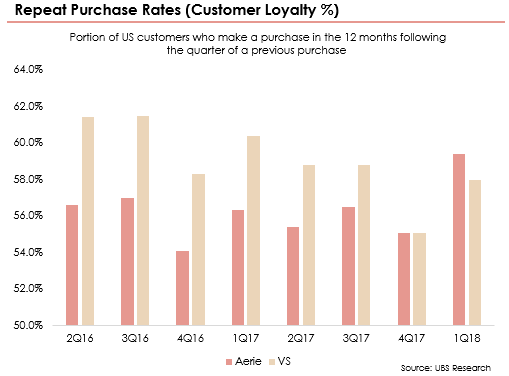 A simple look at marketing efforts from both brands show the divergence in market strategies by both brands. Victoria’s Secret has yet to promote body positivity, but instead, is promoting a culture of ‘sexiness’ and exclusivity while Aerie has capitalized on the ‘body positivity’ and ‘empowerment’ trend to market their lingerie. 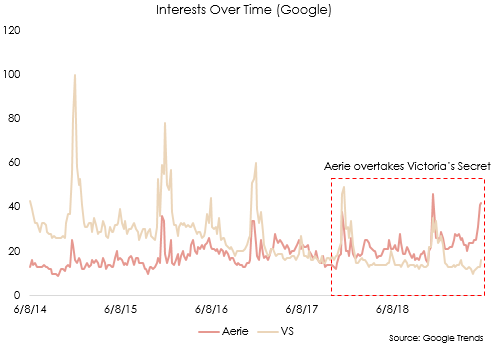 Using Google Trends as a proxy for brand preference, the number of Aerie US searches is now 50% greater than VS's even though VS beat Aerie 4:1 in searches just a few years ago.

Using LULU as a benchmark and given that LULU currently trades at c.7x EV/Revenue, Aerie should be worth at least 3x revenue (given their lower margins) which effectively gives it a valuation of c.2.5 billion, which is more than the current market cap of AEO (1.7 b).

Given that valuing Aerie as done above may be a little too slipshod, a DCF valuation based on more conservative estimates was done for the Aerie segment:

An exit EV/EBITDA multiple of 15x was used in the calculation of the terminal value which I believe to be on the conservative end given that LULU trades at c.27x EBITDA. 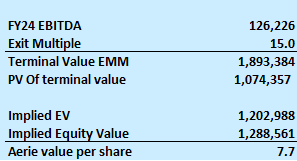 Even with these conservative assumptions, Aerie is still worth about $7.7 a share, which still consists of a bulk of the current share price. While most of the media attention and bear thesis revolves around the weakness of the traditional AE business, I believe that the market is overlooking the potential of the Aerie segment that although only accounts for 19% of total sales, has the highest growth potential.

The main risk surrounding AEO at this time would be the time taken for the Covid-19 virus to subside. If the virus lingers for a longer than expected period of time, the retail sector would definitely feel the pinch. However, given that AEO has 0 debt on its balance sheet, I believe that they are better positioned than peers to weather the storm.

Furthermore, at current price points, AEO offers an attractive 20.9% FCF yield and a 7.5% dividend yield. Given the intense pessimism surrounding the stock, I believe at current levels the risk to reward ratio is highly skewed to AEO’s favor.

To sum things up, given the current macroeconomic climate and Covid-19 fears, retail is bound to take a huge hit. Timing the market to find the ‘rock bottom’ at such volatile times would be taking a shot in the dark. However, amidst all the headwinds faced by AEO, I believe that the current valuation is over bearish. My base case DCF valuation yields about $15.10 a share (93% upside), which isn’t far off from the 150-day moving average of the stock. Even though market irrationality could persist, driving the stock price lower in the near term, from a long-term value investing perspective, I believe that at current valuations, AEO is as asymmetrical a bet as it gets.

Disclosure: I am/we are long AEO. I wrote this article myself, and it expresses my own opinions. I am not receiving compensation for it. I have no business relationship with any company whose stock is mentioned in this article.

Follow Ivan Ng and get email alerts
+
Add a comment
Disagree with this article? Submit your own.
To report a factual error in this article, click here.
Your feedback matters to us!