US stocks (SPY, DIA, QQQ, IWM) have officially entered a bull market, if by using the term we mean a 20%+ bounce off of a market low - at least as measured by the DJIA; the gains came over a period of three days.

Investors have some pondering to do. Was that the powerful base for a V-bottom, or was it a famed bear trap? I'll remind readers that the S&P found itself in a holding pattern for much of 2018 through 2019: flat and with plenty of back-and-forth is a possible outcome.

Spot VIX prints just below 60 at this time.

For the time being, US equity markets appear content to look beyond the abhorrent economic figures that are ready for release, in hopes that unprecedented government intervention will save the day.

There are multiple problems with this view. One is that $2T (in stimulus), while quite a bit, is less than 10% of 2019 US GDP. That amounts to about 5 weeks of last year's US economic output. It is going to be immensely expensive to get the economy back on track, as evidenced by industries such as leisure and travel. 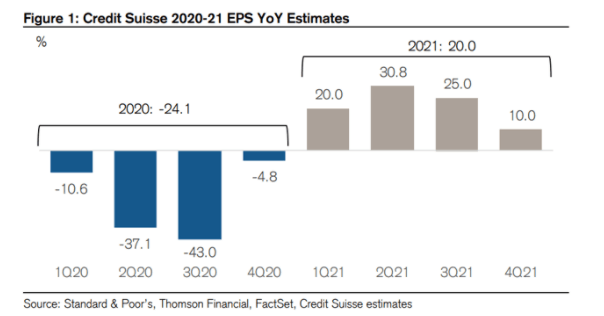 Some Wall Street analysts are taking the view of the snap-back economic growth. I don't doubt that 2021 will probably feature some very generous comps. It is also probable that the actual virus will not be nearly as much of a headline grabber as it is today. But massive damage at the national level has already been done; one entity's spending is another's income. Money flows through the economy, and when there is a massive chokepoint in the line, I don't believe one can readily assume that we can forecast our way to greener pastures. 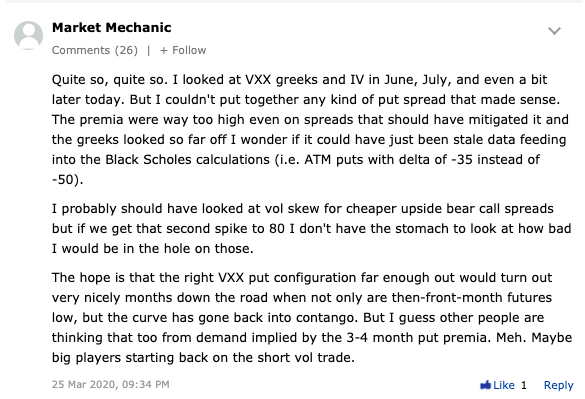 Keep in mind that for longer-dated contracts especially, 50-delta is not "at-the-money", but rather at-the-forward. Maybe MM is observing stale data, or there is some other explanation. But given the steep backwardation that VX futures are in, and how rare it has been to see that particular state of affairs over, say, a three-month window, the shape of the VX futures could explain the situation.

As we'll see in just a moment, Alan's point is strong. First, implied volatility is always a forecast of sorts (considerable divergence of opinion exists on exactly how much it is or is not). It is possible that some VX shorts got short squeezed, but let's not be too hasty to ignore the insane levels of realized vol. By the measure Alan cites in his message, VIX in the 80s was actually printing at a discount to realized vol.

Explaining why a phenomenon can be a useful exercise, but at times it is best just to acknowledge or recognize the simple fact that something is indeed happening, without trying to dig too far into explanations. We may come to have evidence at some point down the road, but it is rarely the case that we will ever know "why" events occur. 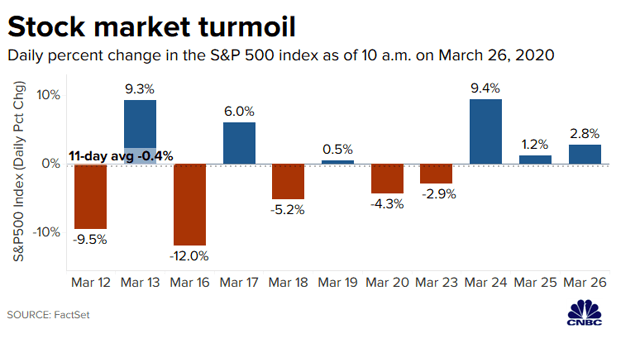 Spot VIX is right around 60, and let's take a look at why. Above are the market moves in the S&P between March 12 and March 26. I'll remind readers that equities have been moving and shaking in earnest at least since mid-February, and so to some extent this is a truncated visual in terms of highly impressive vol readings.

Note the two days of extraordinary gains (as I pen this, the S&P is up almost 5%) during the period. That's what realized volatility is. Options contracts are extremely valuable in such an environment. 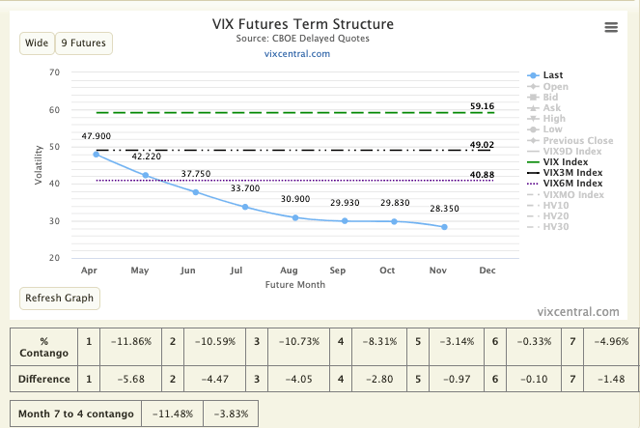 Yesterday I showed how spot VIX was positioned in relation to the VIX9D and the VX1, stating that there is an ongoing tug-of-war between the metrics.

Now I'd like to point out how spot VIX and the VX term structure compares with the longer-dated VX3M and VX6M measures. Once more, the VX futures contracts are trading at considerable discounts to the corresponding VX reading.

From this perspective, the prints in the S&P options markets that generate the various VIX readings reflects higher vol readings than the VX futures. Perhaps the overarching theme here is to remember that related markets can and do trade distinctly from one another. At some point the gap becomes statistically arbitrageable, but the markets do have a certain amount of leeway to act in behaviorally distinct fashion. That's true in the volatility markets, and that's true for any two markets.