The economy and market might not replicate the Great Depression, but things are certainly bad. It's worth studying history.

Based on the numerous estimates out there, the Covid-19 calamity is likely to cause Q2 real GDP to plummet. Estimates range between roughly -9% by Scotiabank (BNS) to -24% by Goldman Sachs (GS). 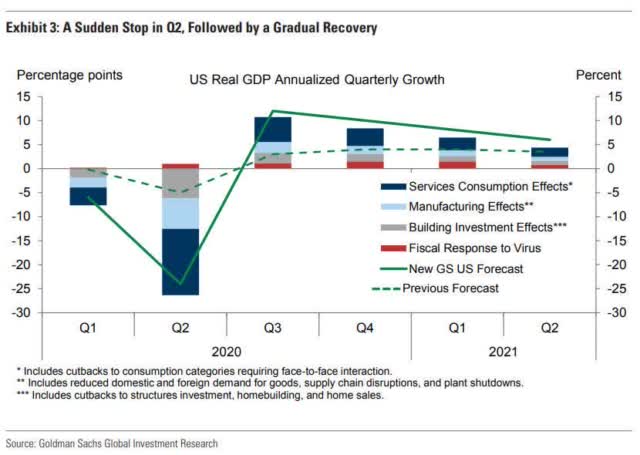 Going even further than Goldman Sachs, Federal Reserve Bank of St. Louis President James Bullard on March 22 said the economy could shrink by 50% in Q2 with unemployment reaching 30%. These are Great Depression numbers!

While the economists predict doom, there are many market practitioners eyeing stocks that have fallen 20, 30, 40%+ off their highs. There are many companies with strong balance sheets and relatively inelastic demand that could survive a major downturn. Furthermore, there are other 'social distancing' facilitators - like Amazon (AMZN) and Netflix (NFLX) - that might actually thrive in a post-coronavirus world.

Despite a growing bullish buzz out there, I am being cautious.

While the coronavirus could be a one-and-done exogenous shock and the economy rebounds sharply, it is also possible the battle against the virus is protracted. How will the market react if the virus appears beaten (as it does currently in China) only to return in the fall? What if a vaccine cannot be created? What if society just has to live with an endemic virus that simply continues to kill off a portion of society? Right now, the answers to all those questions are speculative. There is a lot of uncertainty so I think caution is warranted.

What if This is Great Depression 2.0?

During the early years of the Great Depression the S&P 500 (SPY) lost almost all of its value (S&P 500 data sourced from Robert Shiller). Despite the massive decline, the index had a 'face-ripping' 24% rally from November 1929 to April 1930. This was the ultimate bear market rally. It sucked in many investors who thought the worst was over. These investors subsequently lost a lot of money over the next couple years. 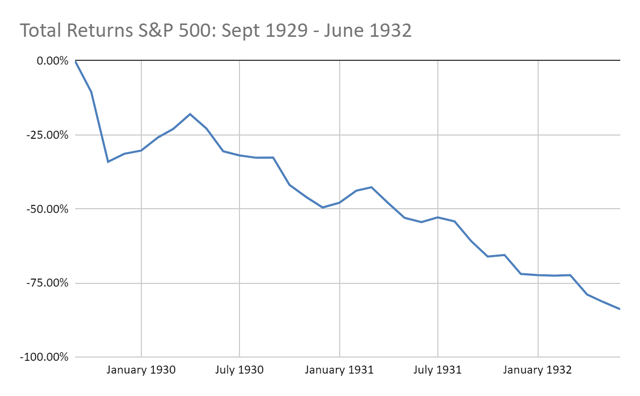 The S&P 500 is currently down around 30-35% from its peak (with current volatility this can change by 5% daily). Comparing the current timeline to the Great Depression would align the current drawdown to around November or December of 1929 (-34% and -31% respectively).

If someone invested in December of 1929 they would have subsequently lost over 50% of their money within a couple years as the bear market raged on.

Before I continue: Today is a lot different than 1929. The financial system is much stronger than it was back then, monetary policy is loose, deposits are FDIC insured and we have numerous social safeguards (e.g. unemployment insurance) to help soften the blow for individuals. The Federal Reserve made the Great Depression worse and I think it's pretty clear it has learned from that experience. However, new policy errors might occur since we are in uncharted territory. Still, things might get bad but probably not Great Depression bad. With that said, I wrote this article to explore investing strategies for the worst case scenario.

As previously mentioned, on December 1929 the stock market was down about as much as it is today. If someone invested at that point, over the short term an investor would have lost over 50%. What about the long term? If an investor who was sitting on cash invested $20,000 into the market and held for 10 years they would have still lost about 32% (cumulative). Diving into the market did not work. 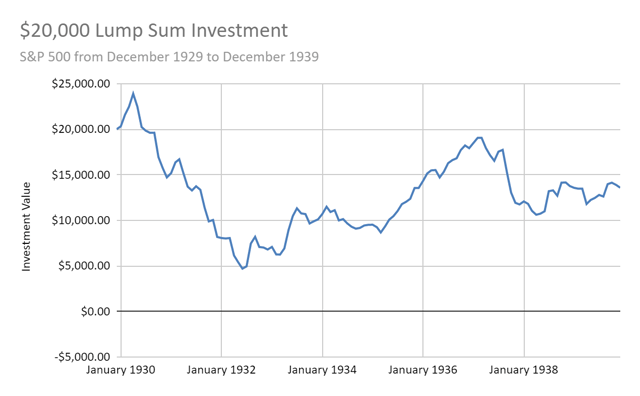 If that same investor instead took a more cautious approach by investing $1000 every 2 months (until the $20,000 was fully invested) he would have actually made +32% over the decade (cumulative). 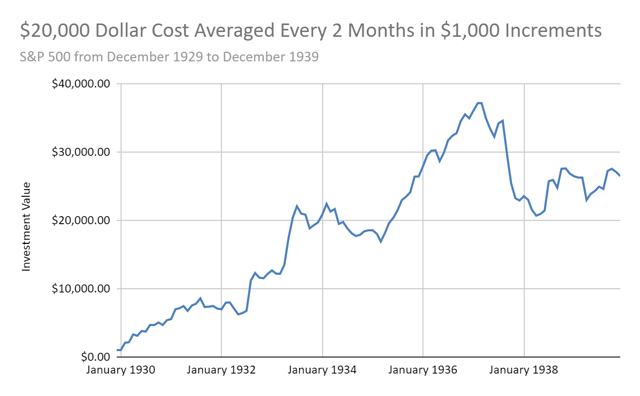 Over a decade a +32% return is nothing to write home about. However, it's certainly a vast improvement over a -32% return.

If you're cautious like me, examining the extreme historical scenario - even if unlikely to repeat - is helpful in creating a strategy that hopefully reduces risk.

The points I'm trying to illustrate in this article are actually quite simple:

Follow Dumb Wealth and get email alerts
+
Add a comment
Disagree with this article? Submit your own.
To report a factual error in this article, click here.
Your feedback matters to us!