Between a slump in energy market activity and a partial revival in the industrial activity, DXP Enterprises’ (NASDAQ:DXPE) outlook hangs in the balance in early 2020. The recent rescue package mooted by the government can, however, uplift the sentiment. However, the negative bias is strong enough to ignore any positivity in the short-term, and so, I think the returns from the stock price will say depressed.

Although DXPE’s gross margin contracted in Q4, I think it would stabilize in 1H 2020 and improve in 2H 2020 because the company provides innovative designs and quality solutions that will attract a premium. It has no significant financial obligations in the near-term. But, the company’s leverage is high, which can become a concern if the energy price stays low for long and cash flow dries up. Until the energy market environment improves, I suggest investors keep a close watch on the stock.

What Are The Indicators Showing? 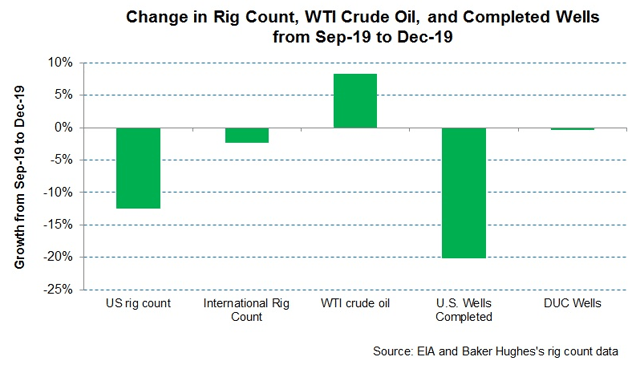 The Coronavirus outbreak and the supply glut following the OPEC+ negotiation breakdown are the two most significant short-term challenges ahead of the energy industry. The International Energy Agency (or IEA) now estimates as much as 3 million barrels per day of crude oil supply can get added in April 2020, resulting in even lower crude oil prices. COVID-19 could lower global E&P project sanctioning by up to $131 billion, or about 68% year-on-year, estimates Rystad.

The West Texas Intermediate (or WTI) crude oil price has crashed to ~$24 per barrel, which is 60% below the level it was at the beginning of the year. Interestingly, from September until December/end of 2019, the average crude oil price was up by 8%. After falling freely in 2H 2019, the completed wells, as well as the drilled but uncompleted wells (or DUCs) in the EIA-designated key shales, have exhibited considerable resilience in 2020 so far.

Because the DUC wells are relatively less expensive to start producing, they will see increasingly higher activity. However, aggregate production in the U.S. can come down because most of the tight producers are swing producers. In any case, the excess capacity of the OFS equipment is likely to keep pricing for pressure pumping services low or competitive in the near-term.

Industrial Activity To Receive A Shot In The Arm

The ISM Manufacturing Prices Index declined to 50.1 as of February 2020, compared to 50.9 in January. Much of the decline was due to the new order contraction, slow production, and unemployment rate. However, the index is still considerably higher compared to the recent low in December 2019, when it fell below 50 (an index below 50 signals an activity contraction). Indeed, the second half of the previous year showed declining manufacturing activity. So, as the indicators point out, its revenues can increase in Q1, although the looming demand concerns can weigh in on its performance in Q2.

However, on March 26, the U.S. government’s passed a $2 trillion stimulus package. The bill, apart from direct payments to individuals and employment insurance benefits, includes a provision for $500 billion in loans for distressed companies. While I have doubts over the long-term efficacy of the program, it can boost private consumption in the short-term, which would be beneficial for industrial suppliers like DXPE. On March 26, DXPE’s stock price jumped up by 9.8%, while MSC Industrial Direct Co.’s (MSM) stock price went up by 3.3%. NOW, Inc. (DNOW) also moved up by 2.8% on the day. 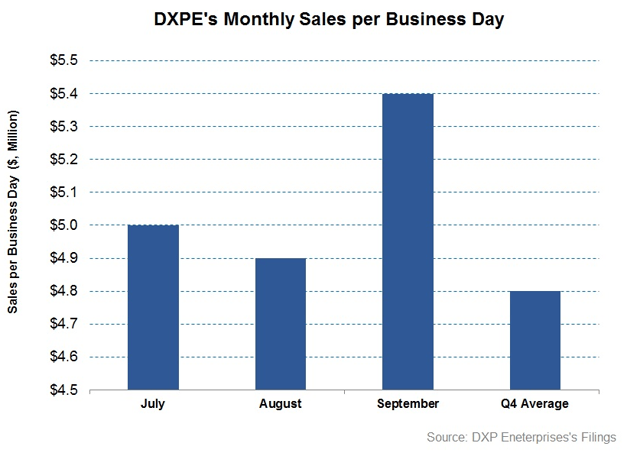 If we look at DXPE’s sales per day, it ticked down to $4.8 million on average in Q4 versus a $5.4 million in September 2019 in response to some of the critical indicators’ decelerating growth. The company’s PumpWorks PWA-SL seamless pump, which has been one of its recent growth drivers, may stabilize despite the overall energy and industrial market activity fall. I discussed more the company’s growth drivers in my previous article here.

As the organic growth components dry up, the company took to the inorganic route. In January 2020, it acquired Pumping Systems Inc. The company, based in Atlanta, Georgia, will enhance the company’s geographic reach, particularly for the company’s rotating equipment. The acquisition is expected to add approximately $18 million - $19 million in annual sales, or ~6% of DXPE’s yearly revenues. In February, the company acquired Turbo Machinery Repair to strengthen its chemical water, wastewater, municipal power industrial business.

The company’s backlog, as of December 31, 2019, was steady compared to a year ago. Going in January and February of this year, the backlog has begun to get translated into revenues. Although the activities in the industry were down, investors may remember that in FY2018, its backlog improved by 40% compared to FY2017. So, even if the current dollar value of the backlog falls, there has not been any significant fall over a three-year average. In Q1 so far, its backlog in the IPS segment has improved, although the visibility won’t clear before Q2. 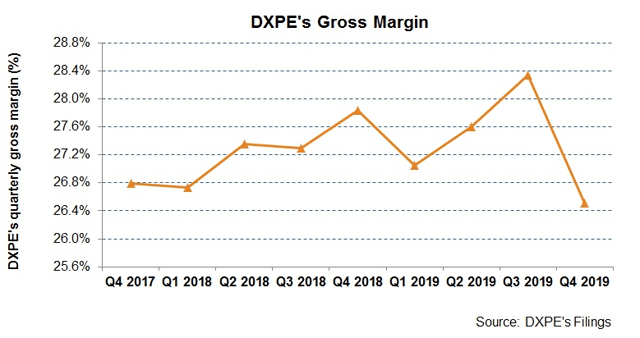 From Q3 2019 to Q4 2019, DXPE’s gross margin deflated by 180 basis points to 26.5%. At the operating income level, the Service Center segment witnessed quarter-over-quarter margin contraction in Q4. However, the operating margin in the Innovative Pumping Solutions (or IPS) segment completely evaporated in Q4. The Supply Chain Services (or SCS) segments, on the other hand, saw operating margin expansion in Q4.

In 2020, the company expects added revenues through acquisitions, the implementation of the new sites, and higher cost absorption will expand gross margin above 28%. However, the primary impediments to the company’s target are low energy activities, which lead to project deferrals. The industrial activity, too, was slow by the end of Q4, although it recovered in the first two months of 2020. Looking ahead, I think the demand side will remain restrained following the Coronavirus pandemic. 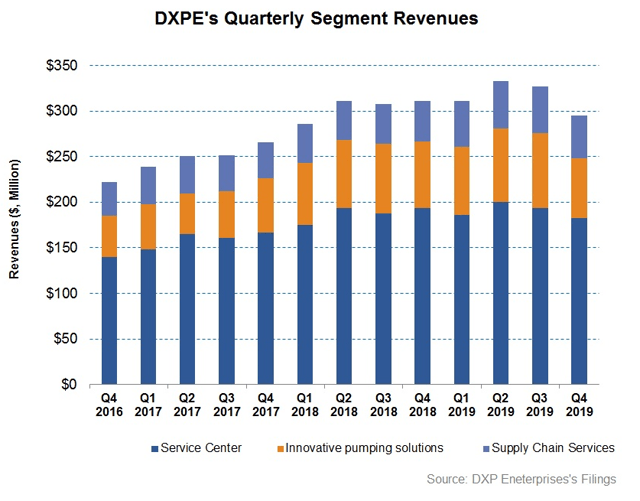 DXPE’s Service Center segment, which accounted for 56% of DXPE’s Q4 2019 revenues, saw a 6% revenue decline from Q3 2019 to Q4 2019. Despite lower revenues in the most recent quarter, the company witnessed steady sales in the Ohio River Valley, West, and Texas Gulf Coast regions, particularly in the seal, metalworking, and rotating equipment product divisions.

DXPE’s Innovative Pumping Solutions (or IPS) segment witnessed an 11% quarter-over-quarter revenue fall in Q4. The shale energy producers, led by a volatile crude oil price, are reducing 2020 capex, which led to a decline in the IPS segment backlog in Q4. So, the company’s monthly average backlog in Q4 was down by 11.4% from the 2018 yearly average. However, it saw higher demand for modular packaged equipment, which helped offset some of the revenue loss.

In the Supply Chain Services segment, DXPE recorded 6% sequential revenue growth in Q4. The company added more than 14 new sites since Q3. Most of the revenue growth emanated from higher demand in the medical device, food and beverage, and aerospace end markets.

In FY2019, DXPE’s cash flow from operations (or CFO) was 15% higher than a year ago. Led by an increase in revenues, CFO also improved due to positive changes in working capital. From Q3 to Q4, the company’s inventory balance decreased. Also, it started a new procure-to-pay platform, Coupa, to manage its relationship with the vendors, which will help manage accounts payable strategically in the coming quarters.

In March 2020, the company increased its asset-backed lending facility by $50 million. With the available liquidity (cash balance plus the undrawn revolving credit facility) of approximately $189 million, DXPE does not require additional external financing to meet its near-term financial obligations. I explained this in my previous article here.

DXPE’s forward EV-to-EBITDA multiple expansion versus the adjusted trailing 12-month EV/EBITDA is less steep than peers because the company’s EBITDA is expected to decline less sharply compared to the fall in EBITDA for peers in the next four quarters. This would typically result in a higher EV/EBITDA multiple compared to peers. However, the stock’s EV/EBITDA multiple is lower than its peers’ (DNOW, MSM, and MRC) average of 6.9x. So, the stock is relatively undervalued at this level. I have used estimates provided by Seeking Alpha in this analysis.

According to data provided by Seeking Alpha, one sell-side analyst rated DXPE a “buy” in March, while two recommended a “hold.” None of the sell-side analysts rated it a “sell.” The consensus target price is $15, which at the current price, yields ~10% returns.

What’s The Take On DXPE?

The energy market environment does not provide a convincing backdrop of any sustained revival in 2020. With a slump in demand and Saudi Arabia unleashing the supply tap, energy market equilibrium has set for lower lows. The E&P activity is unlikely to grow in Q1 in this environment. I think, in the short-term, the energy and industry activity will weaken.

On the other hand, the manufacturing index recovered in 2020 so far from a low in November and December last year, which would be an encouraging sign for the U.S. economy. Although DXPE’s gross margin contracted in Q4, I think it would stabilize in 1H 2020 and improve in 2H 2020 by providing innovative designs and quality solutions. It has no near-term financial obligations. Plus, the company increased its liquidity recently. However, the company’s leverage is high, which can become a concern if the energy price stays low for long and cash flow dries up. Although the company’s stock price has some upsides in the short-term, a leveraged balance sheet injects uncertainty over its viability in the medium-term.

We hope you have enjoyed this Free article from the Daily Drilling Report Marketplace service.

The oil industry is in tatters with most shares down 15-20% over the last month alone. We think better days lie ahead and plan to chart a course through the minefield of broken companies to those that can regain growth prospects. We cover more service companies than any other Marketplace service to help you pick and choose opportunities.

Give it some thought. A 2-week free trial is applicable, so you risk nothing. If you have been thinking about subscribing, it may be time to act!