With the Federal Reserve slashing its key short-term interest rate to nearly zero on March 15, investors are going to see their return on safe short-term investments fall to zero in coming months.

Say goodbye to Treasury Money Market Funds paying interest of 1.5% or higher. We may not see those rates again for many months, possibly years.

I've been rolling over 13-week Treasury bills since May 2017, when I recommended taking a look at this super-safe investment. It's been a nice run, with the yield gradually climbing from about 0.89% in May 2017 to a high of about 2.50% in March 2019. But things have changed. I noticed this week that the latest 13-week Treasury auction, on March 23, got an investment rate of 0.00%, the lowest it can go. Here's how the trend looks for these 13-week Treasury auctions:

Here is how the 4-week Treasury tracks the return of the Federal Funds Rate:

At the same time, investors are going to see yields plummet for top-performing Treasury money market funds, which track returns of the 4-week and 13-week Treasurys. For example, the Vanguard Treasury Money Market Fund (VUSXX), currently lists its 7-day SEC yield as 0.95%, but you can expect to see that drop to near zero in coming weeks, as its return catches up to the current return of 4-week Treasurys.

I Bonds as an alternative?

A U.S. Series I Savings Bond is a Treasury investment that pays a fixed rate (currently 0.2%) for the life of the I Bond, combined with a variable inflation-adjusted rate (currently 2.02%) that changes every six months. Combine those rates and you get a composite six-month interest rate of 2.22% (annualized) for I Bonds purchased before May 1, the date of the next rate reset.

I'm a fan of I Bonds as a long-term inflation-protected investment and I've been encouraging readers to invest in I Bonds before the May 1 reset to lock in that 0.2% fixed rate. The fixed rate is the I Bond's "real yield," meaning its yield above inflation. This current fixed rate makes I Bonds superior to Treasury Inflation-Protected Securities of all maturities:

But there are times, fairly rare, when I Bonds make sense as a short-term investment for stashing away cash. This happens when current U.S. inflation is running much higher than the Federal Funds Rate, which is certainly true today: As of February, U.S. annual inflation was 2.3%.

The next change to the I Bond's variable rate will come May 1, based on U.S. inflation from October 2019 to March 2020. Currently, with one month remaining, inflation has been running at 0.75% for that period, which equates to a variable rate of 1.50%. (A deflationary number is likely for March, which will lower that rate, most likely.)

One unique aspect of I Bonds is that rates are set for six months and investors capture those rates for a full six months before any changes in the variable rate. So if you invest in I Bonds before May 1, you will capture a 2.22% composite rate for six months, and then an uncertain rate of six months, providing at least an overall return of 1.11% for the year.

I haven't seen any projections yet for March non-seasonally adjusted inflation, but I'd expect it to be down at least 0.2% or 0.3% for the month, because of declining gasoline prices. That would drop the six-month inflation rate down to a range of 0.45% or 0.55% for the six-month period, and result in a new variable rate of 0.90% to 1.10%. Here are the numbers so far:

It's impossible to say exactly where March inflation will fall, and honestly, I haven't been seeing a lot of price reductions on everyday products, and even gasoline prices haven't dropped off a cliff (yet). But at the very worst, the variable rate could drop below 0.0%, which would then cut into the I Bond's fixed rate of 0.2%, creating a composite rate of 0.0% for six months. I don't see that happening.

I Bonds versus short-term alternatives

I Bonds have an advantage over other short-term investments, which adjust quickly to falling interest rates. The yields on I Bonds adjust only every six months, so when yields are higher than the overall market, I Bonds offer an advantage, for a full six months. Let's take a look at how I Bonds purchased before May 1 might perform versus other safe short-term investments over the next year: 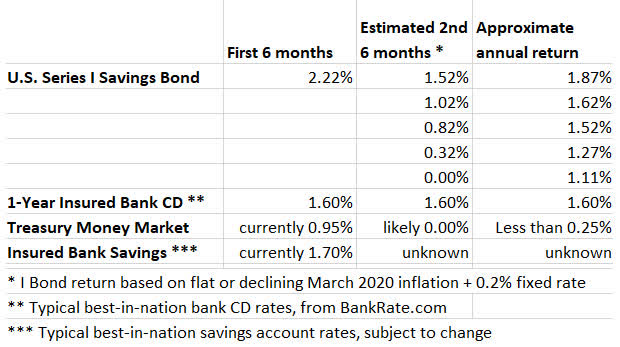 If inflation comes in at 0.0% for March 2020, then I Bonds purchased before May 1 will return about 1.87% over the next 12 months, better than best-in-nation 1-year bank CDs, currently paying about 1.6%. If inflation for March comes in negative - say at -0.25% - which seems possible, the I Bond's return could still equal or come close to the return of a bank CD, without any state income taxes due. And the I Bond will definitely beat the return of 4-week Treasurys (somewhere near 0.0%) and Treasury money market funds (also close to 0.0%).

All of this hypothetical math will be resolved at 8:30 a.m. EDT on April 10, when the Bureau of Labor Statistics releases the March inflation report. That will set in stone the I Bond's inflation-adjusted rate, and investors will have 20 days to decide to buy before the May 1 rate reset. The I Bond's fixed rate will also be reset on May 1, and almost certainly will fall to 0.0%, so any long-term investor should buy before then. The fixed rate is permanent.

But here's the thing: That three-month interest penalty could end up costing an investor very little, if the United States dips into relatively deep deflation from April to September, which seems likely. Deep deflation would set the I Bond's variable rate below zero on November 1, and likely result in a composite rate of 0.0% for I Bonds purchased now.

And you can snip off part of the time period by buying the I Bond late in the month and redeeming it early in the month.

Will deflation reduce the value of an I Bond?

For an investor viewing an I Bond as a short-term investment, after April 10 the total return will be clear: Six months of 2.22%, six months of x.xx%, to be determined by the March inflation report. Then, after a year, redeem the I Bond, or hold it another three months if the composite rate drops to near zero.

I already purchased my full allocation of I Bonds - $10,000 per person per calendar year - on Friday, but this was definitely as a long-term investment. I'm not planning to redeem these any time in the near future.

But for an investor looking for a place to park cash for one year, the I Bond is an attractive option, and would pair well with best-in-nation bank CDs, which are paying well over the 1-year Treasury rate of 0.11%. But those CD rates may not linger for long. Time to put your cash to work.

Anyone on the fence about I Bonds as a short-term investment should wait until after the April 10 inflation report, which will make the next year's return totally clear.