Pinterest (NYSE:PINS) went public in April 2019, pricing its shares at $19.00 each while obtaining a market cap at the time of $10 billion.

The firm operates an online social media and network site for consumers worldwide.

I’m bullish on the stock at its current depressed level as I believe the Covid-19 pandemic will recede in the coming warmer months (northern Hemisphere) and the firm’s financial results will produce a strong catalyst.

Note: PINS is a candidate for inclusion in my personal portfolio.

San Francisco-based Pinterest was founded in 2010 to provide a destination site for people interested in reimagining their lives.

Management is headed by co-founder and CEO Ben Silbermann, who was previously at Google (GOOG).

Below is a brief overview video of a Pinterest use case:

According to management, it views its market as the global advertising market for the CPG and retail industries.

This represents a CAGR of 5%, which while a moderately low growth rate, is still a very large absolute growth in dollars spent.

Management says its growth strategy is to invest in technical innovations to ‘deepen Pinners’ engagement’ with the service, make Pinterest more ‘shoppable’ by adding ecommerce capabilities directly to the experience, localizing Pinterest to users around the world, and bring high-quality commercial content by partnering with select content creators.

In 2016, the firm expanded its focus from U.S. users to international audiences and now counts over 250 million users it defines as ‘active.’ Two-thirds of users are female.

PINS has been allowing advertising on the site since 2014 and features large CPG and retail brands that it acquires through a direct sales force to focus on these ‘managed’ accounts.

Additionally, it has built out its online tools for mid-market and unmanaged accounts to use the platform for their advertising efforts.

Pinterest’s topline revenue by quarter has grown sharply year over year for Q4, as the chart shows below: 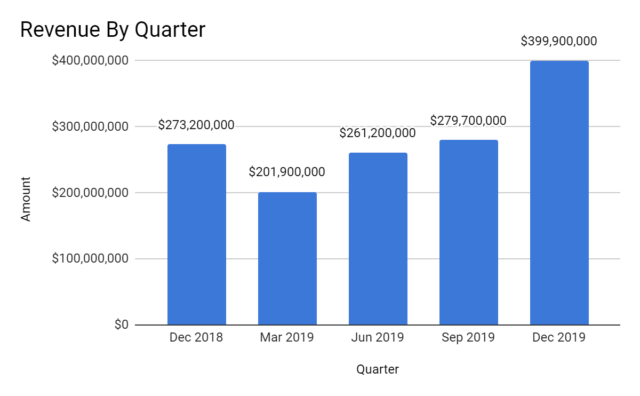 Gross profit by quarter has followed a similar pattern, reaching $300 million in Q4 2019: 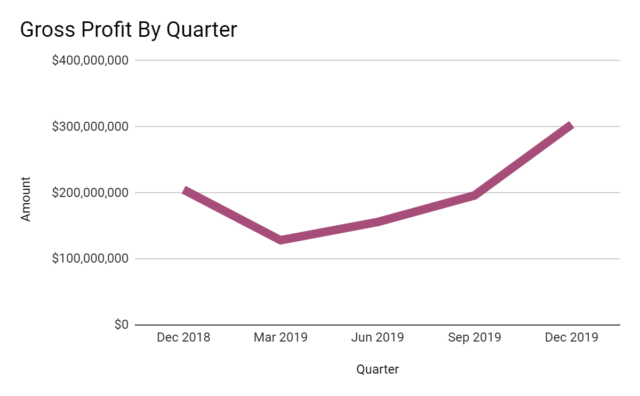 Operating loss by quarter has been uneven, but Q4 2019 had the lowest operating loss of the past five quarters: 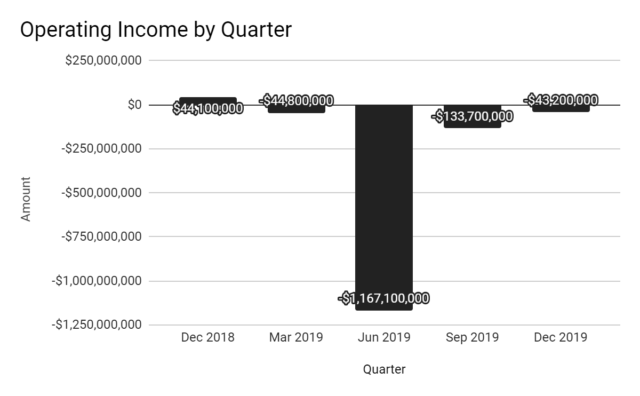 Earnings per share (Diluted) have have been uneven as well, but the firm is close to EPS breakeven as of Q4 2019: 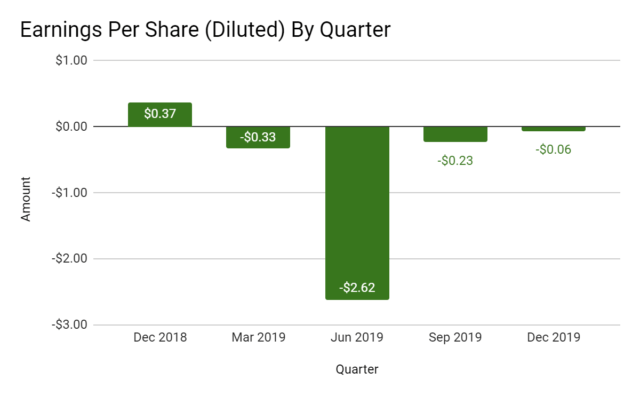 Since its IPO pricing, PINS’ stock price has 19.4 percent vs. the U.S. Interactive Media index’ fall of 8.9 percent and the overall U.S. market’s drop of 13.6 percent, as the chart below indicates: 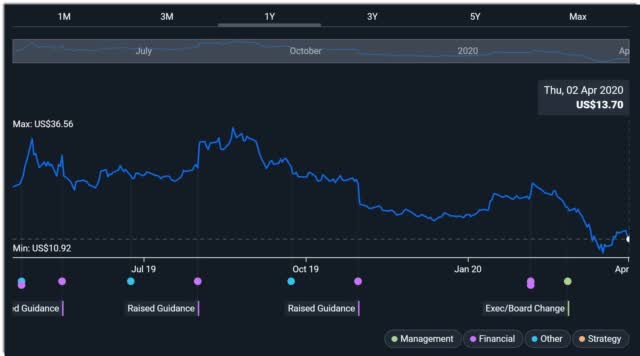 Below is a table of relevant capitalization and valuation figures for the company:

As a reference, a potential public comparable to PINS would be Twitter (TWTR); shown below is a comparison of their primary valuation metrics:

In its last earnings call, management highlighted its 2020 goals:

Notably, when Pinterest went public, many of the above-listed priorities were cited by management as priorities then.

On the ‘shoppable’ aspect of the site, management believes it is still in the ‘early innings’ of building out this functionality, which includes multiple aspects such as inventory via merchants, shoppable ‘surfaces’ and the machine learning technology that matches images to inventory capabilities.

Also, management is not pursuing a ‘take rate’ business model with the shopping functionalities. Rather, ‘monetization comes when businesses who start to see organic traction choose to use our shopping ads.’

So, the shoppable function really serves as a ‘funnel’ for the firm’s advertising-centric revenue model.

As for user growth, the site is now up to more than 300 million MAUs, with international growing at the highest rate, as the chart shows here: 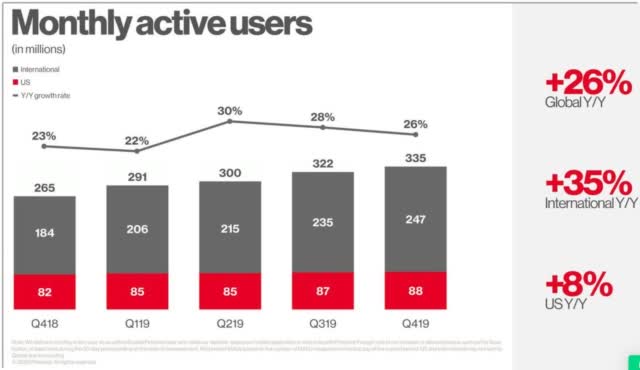 However, EPS still has yet to reach breakeven since the firm went public, although the current trend line suggests that that milestone could occur within the next few quarters, unless the effects of the Covid-19 pandemic delay it.

While the stock has sold off in the overall market drop in February-March, I suspect PINS will report better Q1 2020 results since it is an all-digital business less impacted by the pandemic than other firms.

Accordingly, my outlook on PINS is Bullish ahead of its just-ended Q1 2020 results.

While advertisers may have pulled back during the quarter, investors with a medium-term hold time horizon may be able to acquire PINS shares at or near 52-week lows in preparation for a summer bounce back as the effects of the pandemic recedes in most developed nations.

Disclosure: I/we have no positions in any stocks mentioned, but may initiate a long position in PINS over the next 72 hours. I wrote this article myself, and it expresses my own opinions. I am not receiving compensation for it (other than from Seeking Alpha). I have no business relationship with any company whose stock is mentioned in this article.