For the past two years, I have been warning investors about the dangers of overvalued, high-quality stocks and sharing a long-only rotational strategy to help mitigate the dangers of these highly-priced stocks. The basic idea is that when the expected 10-year forward returns of the target stocks (in this case, Sherwin-Williams (NYSE:SHW)) get low enough, one rotates out of the stock and into a pair of ETFs with the goal that the ETFs will be more defensive during a downturn. Then, when the price of the target stock falls more than those of the defensive ETFs, the investor who likes the target company can rotate back in and own more shares than they would have had if they just held the stock the entire time.

My current suggestion is that owners of Sherwin-Williams who would like to avoid part of the eventual correction in the stock rotate out of it and into a 50/50 mix of the Invesco S&P 500 Low Volatility ETF (SPLV) and the Invesco S&P 500 Equal Weight ETF (RSP) until Sherwin's price falls to a more reasonable level that offers better forward returns. My expectation is that owners would be able to increase the number of Sherwin-Williams shares they own by 20-25% using this strategy without spending any additional money.

I tracked the results of my strategy (along with what would eventually become 42 other stocks I suggested selling due to high valuation this past year). The goal was to rotate half the funds back into Sherwin-Williams once one could achieve a 20-25% "free share gain" and to rotate the other half of the funds back in once the stock was trading at fair value again. (For me, fair value, in this case, was an expected 10-year CAGR of 8%). The "free-share-gain" portion of this strategy hit the 25% goal earlier this month and I updated those results in my last monthly update article here.

In this article, I'm going to examine whether it is time for investors bullish on Sherwin-Williams's long-term prospects who rotated out of the stock back in November to now rotate back in using the "fair value" method.

Is Sherwin-Williams now at fair value?

Next, I'm going to run what I call a "Full-Cycle Analysis", which is the same analysis I performed back in November that identified Sherwin-Williams's stock as being overvalued enough to sell. As part of the analysis, I calculate what I consider to be the two main drivers of future total returns: Market Sentiment returns and Business returns.

In order to estimate what sort of returns we might expect over the next 10 years, let's begin by examining what return we could expect 10 years from now if the P/E multiple were to revert to its mean from the previous economic cycle. I start the previous cycle around 2007 about a year before the last cyclical peak. 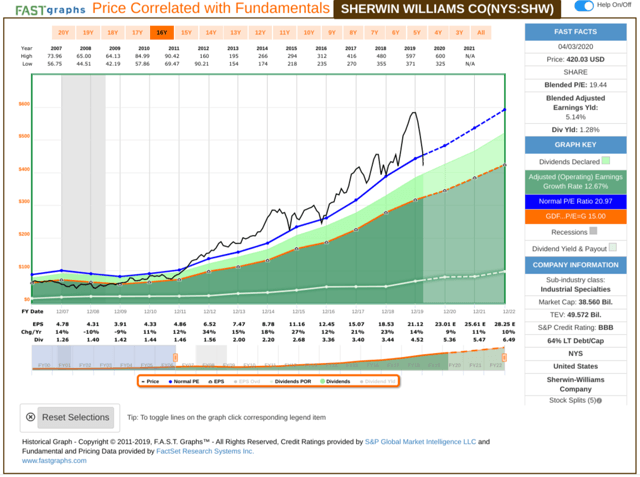 We previously examined what would happen if market sentiment reverted to the mean. This is entirely determined by the mood of the market and is quite often disconnected, or only loosely connected, to the performance of the actual business. In this section, we will examine the actual earnings of the business. The goal here is simple: We want to know how much money we would earn (expressed in the form of a CAGR %) over the course of 10 years if we bought the business at today's prices and kept all of the earnings for ourselves.

Sherwin-Williams's forward earnings yield is currently +5.32%. The way I like to think about this is, if I bought the company's whole business for $100, I would earn $5.32 per year on my investment if earnings remained the same for the next 10 years.

The next step is to estimate its earnings growth during this time period. I do that by figuring out at what rate earnings grew during the last cycle and applying that rate to the next 10 years. This involves calculating the EPS growth rate since 2007, taking into account each year's EPS growth or decline, and then backing out any share buybacks that occurred over that time period (because reducing shares will increase the EPS due to fewer shares).

Let's start by looking at how much shares were reduced since 2007.

Sherwin-Williams has reduced its shares outstanding by about -31% over the course of this cycle. I'll back these out of our earnings growth estimates. When I go back to 2007 through today, I get a cyclically adjusted earnings growth rate of +10.24%, which is a very good growth rate over this period. (And, just as a side note, I like how SHW eased off the buybacks once the stock price started getting expensive in 2015. Most companies did not do so. That's a plus for management in my book).

Next, I'll apply that growth rate to current earnings looking forward 10 years in order to get a final 10-year CAGR estimate. The way I think about this is, if I bought SHW's whole business for $100, it would pay me back $5.32 the first year, and that amount would grow at +10.24% per year for 10 years. I want to know how much money I would have in total at the end of 10 years on my $100 investment, which I calculate to be about $198.38. When I plug that growth into a CAGR calculator, that translates to a +7.09% 10-year CAGR estimate for the expected earnings returns.

Potential future returns can come from two main places: market sentiment returns or earnings returns. If we assume that market sentiment reverts to the mean from the last cycle over the next 10 years, it will produce a +1.50% CAGR. If the earnings yield and growth are similar to the last cycle, the company should produce somewhere around a +7.09% 10-year CAGR. If we put the two together, we get an expected 10-year, full-cycle CAGR of +8.59%. Since this expected forward 10-year return is above 8%, Sherwin-Williams is now trading near what I consider "fair value", and for the purposes of this demonstration of the rotational strategy, an investor could now rotate the second half of the money back into the stock. Next, let's see how the "fair value" portion of the rotational strategy performed.

Normally, this is a fairly simple process of checking the results of the default ETFs versus the target stock, but we had a rare event take place at the end of February where it became clear we were headed for a recession. When that happens, we move all of our "default ETF money" into cash. I meticulously documented that in my last update article, "Going To Cash: Rotational Strategy Update (February 2020)". The way I'm tracking the results now that the default money has been moved to cash is to calculate the returns on a theoretical $10,000 up to the point it was moved to cash, and then to compare that cash amount (which does not grow when it is held in cash) to the theoretical growth of $10,000 kept in the target stock.

In this case, when the money from SPLV and RSP was moved to cash, it would have been worth $9,304, so it would have suffered about a -7% loss over the holding period. But the primary goal of this strategy was to increase our shares in Sherwin-Williams for free, so let's see what the stock would have returned.

Sherwin-Williams's stock has fallen about -28% since my warning article, and a $10,000 investment would now be worth $7,200. (Notably, it also underperformed the S&P 500 index over this period as well). The money that was first put in SPLV and RSP, then into cash, would now be worth $9,304. An investor who followed this strategy could now take that $9,304 and buy +29.22% more Sherwin-Williams stock than they owned back in November. In other words, an investor who owned 100 shares of Sherwin-Williams stock on November 27th, 2019, could now buy 129 shares of the stock without spending any more money.

This completes the demonstration of the rotational strategy with Sherwin-Williams. The first half of the rotation gained about 25% more free shares, and the second half (which is what was covered in this article) gained about 29% more free shares. I have 30 additional high-quality stocks I'm still tracking in this series, though, so we should have a fairly large sample from which to judge and analyze the strategy in the future.

When to buy for value investors?

My basic threshold for buying a stock with a margin of safety and good forward returns is for the 10-year full-cycle CAGR to be greater than 12%. But since we are going into a recession, I have slightly stricter standards that I apply. First, I want the business's three-year revenues to have at least appreciated by 10%. So, let's check that first.

Sherwin-Williams has no problem with revenue growth. The next thing I want is for the business earnings portion of the CAGR to be at least 9%, and I also want the P/E to be at least within 20% of the P/E during the trough of the last recession. These let me know that I'm not relying too much on future market sentiment changes for all of my potential returns, and it tries to get us at least somewhat close to the bottom in terms of P/E. (The earnings of these companies will certainly drop over the course of the next year, so using the trough P/E is really just a way to avoid buying way too early if the market has a history of sending the stock far lower than average during recessions. It's not particularly good at picking exact bottoms, though, so that's not the purpose of using trough P/E as a guide).

The price at which Sherwin-Williams will meet all these criteria based on current forward earnings is about $290.00. That's the price at which I would, as a value investor, be a buyer of the stock. This isn't a "target price" as much as it is a price that I think has a greater-than-50% chance of occurring during this recession downcycle.

So far during this downcycle, I have purchased 33 stocks using this method, so plenty of the prices are hitting right now, but there is never any guarantee that all the stocks I'm watching will hit. I'm always trying to strike a balance between the likelihood of getting a lower price and the likelihood of the price never dropping that far, so the price above is my best attempt to find a good balance between the two.

If you have found my strategies interesting, useful, or profitable, consider supporting my continued research by joining the Cyclical Investor's Club. It's only $29/month, and it's where I share my latest research and exclusive small-and-midcap ideas. Two-week trials are free.

Disclosure: I am/we are long SYK. I wrote this article myself, and it expresses my own opinions. I am not receiving compensation for it (other than from Seeking Alpha). I have no business relationship with any company whose stock is mentioned in this article.