The U.S. Stock Market has done extraordinarily well over the past decade. Unfortunately, trees don't grow to the sky and this outperformance versus the rest of the world can't continue forever. Notwithstanding this fact, too many American investors expose themselves to unnecessary risk by maintaining a disproportionately large weighting towards their home stock market. Vanguard FTSE Developed Markets (NYSEARCA:VEA) is a low cost index ETF which I would argue can act as an effective counterbalance to this common bias.

Home Country Bias is a well-documented phenomenon in which investors prefer to own shares in companies from their own country versus the rest of the world.

In fact, research has shown that the average U.S. investor allocates around 70% of their equity portfolio to U.S. stocks, despite the fact that the country accounts for just 25% of GDP and represents around 36% of the total market capitalization of global equity and bond markets.

While diversification through a selection of U.S. stocks is good, investors should optimally try to reduce risk by constructing a portfolio that depends to a lesser degree on the success of just one country, especially one whose markets are significantly overvalued by historical standards.

Over the last ten years, U.S. stocks (as measured by the S&P 500) have offered an incredible total return of almost 9.7% annually (even including the recent downturn).

This massive increase in the price of equities has seemingly got ahead of the real values of the companies underlying the shares, as supported by a number of popular market valuation metrics.

One example of such a metric is the cyclically adjusted price-to-earnings ratio (CAPE) for the S&P 500. This is still at a very high level (around 23.5x) versus its long-term mean of approximately 17x and median of 16x.

Reversion to the mean is a very powerful influence over long-term stock prices. With such strong performance over the last decade from the U.S. and such relatively weak performance from the rest of the world (especially other developed markets), now would seem a great opportunity for American investors to rebalance the risk in their portfolio and take advantage of higher prospective returns from overseas markets over the next decade. 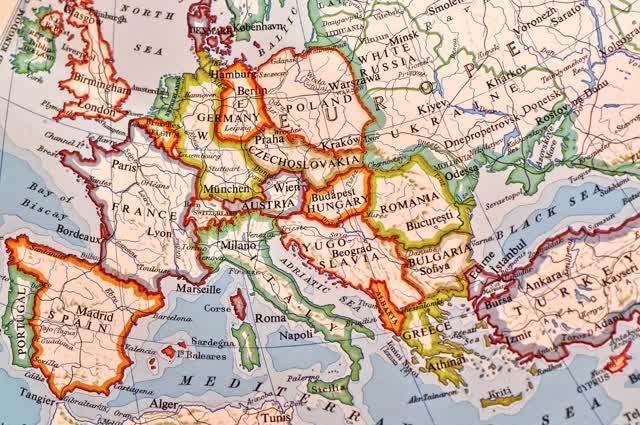 Vanguard FTSE Developed Markets offers cheap exposure to developed markets outside the U.S. In total, there are 3,960 companies contained within the fund, mainly based in Japan and Europe.

The first thing to be aware of is that these stock markets are on average nowhere near as overvalued as the U.S. market. To demonstrate this, compare the current S&P 500 CAPE of 23.5x with the markets of some of the larger countries represented in the index.

Japan has a CAPE value of 17.5x, while the U.K., Canada, France, Switzerland, and Germany have CAPE multiples of 12.1x, 16.8x, 16.4x, 23.2x, and 13.8x respectively. Reversion to the mean suggests that these undervalued markets should perform better than the U.S. market over the next decade.

Here are the top ten countries represented in the index:

The 10 largest holdings shown below account for 10.3% of the ETF's total assets. It's pretty clear that these are high-quality global companies that have been around for many decades and will continue to play an important role in the global economy:

One important point to be aware of is that this fund is likely to be less volatile than an equivalent "ex-U.S." fund which also covers emerging markets such as Russia, China, and India. VEA on the whole only invests in companies with very stable political and economic systems.

As is the case with most Vanguard index funds, the expense ratio for the ETF is remarkably low at just 0.05%. According to Morningstar, the average expense ratio of similar funds is around 0.98%.

One final consideration for prospective investors is the attractive dividend yield provided by VEA resulting from exposure to markets such as Japan and Europe which have a much more ingrained culture of dividend payouts. Currently, this yield stands at 4.07%, slightly less than double the 2.29% offered by the S&P.

While investors focused on the U.S. stock market have done very well over the past decade, there's no guarantee that this trend will continue. U.S. stocks are looking rather overvalued and consequently now might be a good time to allocate a larger proportion of your portfolio to an index containing some strong foreign companies. Vanguard FTSE Developed Markets ETF is an extremely cost-effective way to do this.

If you liked this article, please scroll up and click "Follow" next to my name to not miss future investment opportunities.

Ben Holden-Crowther
236 Followers
I am a global investor aiming to identify companies with durable competitive advantages and excellent management teams. My goal is to acquire shares in these high-quality businesses when they are available for prices below their intrinsic value. Through this simple philosophy I strive for long-term outperformance versus market averages.