If you are looking for a stock that is likely to significantly outperform the S&P 500 (SPY) in the 2020s once a new bull market begins, then Roku (NASDAQ:ROKU) is one to consider. Roku's stock did take a sizable fall over the last few months which was larger than the market's decline. However, this creates a better buying opportunity since the company is set for strong long-term growth. Roku is benefiting from the trend of the cancellation of traditional cable TV services ('cord-cutting') in favor of TV/movie streaming platforms.

Roku dominates market share for streaming media platforms. Roku has about 39% market share, ahead of Amazon's (AMZN) 30% share from Fire TV. This demonstrates Roku's attractiveness in the eyes of consumers for streaming. Roku beat out large companies such as Amazon, Apple (AAPL), and Google (GOOG) (GOOGL) for streaming platforms.

Another important statistic is that Roku also dominates the market for programmatic ad market share at 59%. This means that Roku is getting the most revenue for video ads on its platform as compared to other companies. Amazon has the 2nd highest ad market share at just 19%. So, again, Roku demonstrated its ability to outperform larger companies. That should help the company continue its growth in existing regions and into new regions.

The main driver for Roku's stock to outperform the broader market is likely to be the company's above-average revenue and earnings growth. Granted, Roku is not yet profitable. However, the gross margin has been increasing as advertising revenue has increased. The company is on track for profitability in about 2022.

The stock has been an outperformer during the bull market as it increased from the low $20s up to the $170s from the IPO in 2017 to the stock's peak in September 2019. However, the stock did have a tendency to experience sharp declines of over 50% multiple times during this period. So, investors might want to consider trading in and out of the stock on oversold and overbought conditions. Otherwise, you would have to have a strong stomach to hold the stock over the long term.

Roku's revenue growth is expected to exceed 30% annually for 2020 through 2022 (consensus). Of course, those estimates could change because of the uncertainty of the impact of COVID-19. The good news is that consumers are limited to what they can do at home during the shutdowns. Streaming TV shows and movies are among the activities that are available. Therefore, the COVID-19 situation may not have a significant negative impact on Roku's revenue as compared to many other businesses.

Profitability is on the way as Roku increases the gross margin. The GM increased to 44% in 2019, up from the 30% range a couple of years ago. Continued GM increases can allow the company to reach positive earnings in about 2 years. The anticipation of future profitability along with Roku's strong revenue growth has a good chance of driving the stock for above-average gains over the next couple of years.

Since Roku isn't profitable yet, the price to sales ratio is a reasonable metric to use because it is based on revenue instead of earnings. Keep in mind that Roku tends to maintain an above-average valuation. The reason for that is because investors tend to price a premium into the stock, encompassing the company's above-average revenue growth. 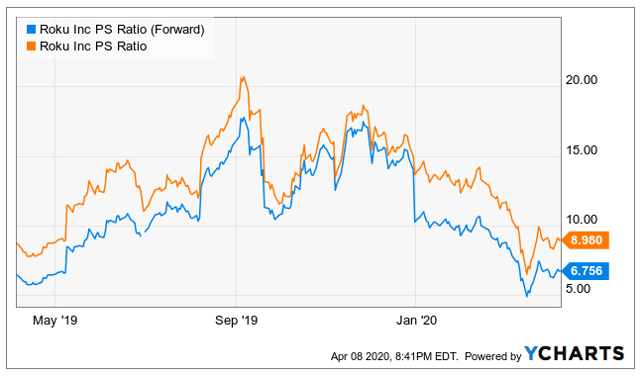 The reality is that some stocks will maintain an above-average valuation over long periods of time. Roku happens to be one of them as revenue growth has been growing at a strong double-digit annual pace. Roku can probably be placed in the category of outlier stocks like Netflix (NFLX) and Amazon which have maintained higher-than-average valuations over many years.

Netflix and Amazon had many years where they were growing revenue at above-average paces while their valuations were sky-high. Value investors shunned these stocks for years at their own missed opportunity cost. Even Warren Buffett admitted that he missed out on Amazon's stock growth.

Value investors can be quick to say that Roku's value is too high and that the company is not yet profitable. That's true based on standard metrics. However, you have to visualize the future to get the bigger picture of the stock's true potential.

Roku has been improving its prospects for profitability. Continued gross margin gains have Roku on track for positive earnings in about 2022. The company is likely to continue growing revenue at a strong pace due to the trend of cord-cutting. Therefore, buying the stock on the current dip in valuation during a period of market weakness can provide a good entry point for a long-term position. 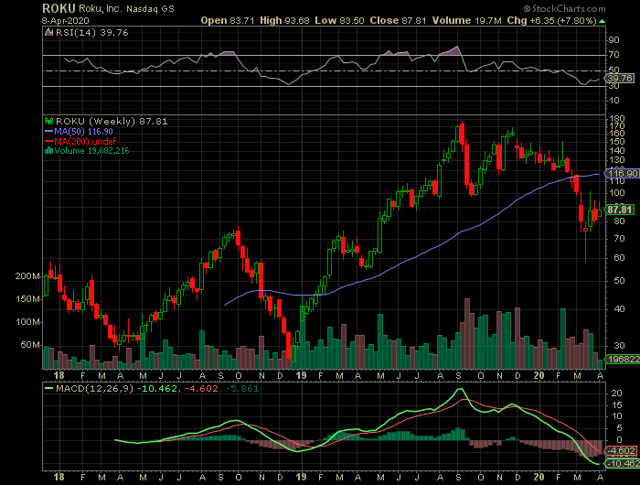 The weekly chart above shows that the stock recently bounced higher from an oversold level on the RSI indicator. However, there is still a lot of volatility in the market. Plus, it might be difficult to pick the bottom for the stock, especially when the market could drop again. With the stock trading about 50% lower than its 52-week high, now is probably a decent time to start a position if you're going to hold onto to it for multiple years.

Roku is a company that is likely to grow revenue at a strong pace for multiple years. Many consumers have demonstrated their desire to stream TV content/movies over standard cable services. The amount of U.S. consumers canceling their standard cable-style TV subscriptions and those never getting cable TV subscriptions is expected to grow from 48.9 million to 61.5 million by 2023. This trend is likely to help drive revenue growth for Roku.

Watch for Roku to continue growing revenue by increasing ad dollars, adding new smart TV manufacturers for licensing, and growing the business geographically. Keep an eye on momentum from the competition to see if the investment thesis needs to be changed or modified.

Investors will have to decide how much volatility they want to bear. You can hold for the long term and deal with the sharp drops that have been characteristic of the stock or be more nimble and trade it between oversold and overbought conditions.

Roku's stock has a good chance of outperforming the market over multiple years with above-average revenue growth and the cord-cutting trend as a tailwind. At Margin of Safety Investing, we look for stocks that have a good chance of doubling within a few years, and Roku is one with that potential.

The 2020s will see the transformation of the economy during the 4th Industrial Revolution. We are also running head first into a wave of demographic and debt driven problems that will need solving. A cautious, but forward looking approach, will be required to thrive in what could be a lost investing decade for many, much like 2000-2009.

Benefit from the insights of Kirk Spano, Dividend Sleuth, and David Zanoni. Get exclusive investment ideas based upon in-depth and up close research that few others do.

Sign-up now for a free trial and 20% first year discount.

Through diligent analysis, he is ranked in the top 1% of blogging analysts on Tipranks.com for performance and accuracy. David previously contributed to Kirk Spano's Margin of Safety Investing [MoSI] Marketplace Service and Risk Research Inc.

David focuses on growth & momentum stocks that are reasonably priced and likely to outperform the market over the long-term. He is a long term investor of quality stocks and uses options for strategy.

He wants to help make people money by investing in high-quality growth stocks.

Additional disclosure: The article is for informational purposes only (not a solicitation to buy or sell stocks). David is not a registered investment adviser. Kirk Spano is an RIA. Investors should do their own research or consult a financial adviser to determine what investments are appropriate for their individual situation. This article expresses my opinions and I cannot guarantee that the information/results will be accurate. Investing in stocks involves risk and could result in losses.