Over the past year, investors in the United States Oil Fund (NYSEARCA:USO) have taken a clobbering as shares are currently sitting at a year-to-date decline of 61%. While these returns are painful, it is my belief that unfortunately shares of USO are going to continue to decline – and potentially dramatically so. The primary reason for my caution against holding USO at this time has to do with historic levels of contango which means that roll yield is going to be a very real problem for shareholders over the coming weeks.

In a recent article about USO, I spelled out the major fundamentals impacting oil futures at this time. In this piece, my primary objective is to dig into the roll yield mechanics of the current market as per how they relate to USO’s returns. We are currently at very strong levels of contango in WTI futures, which means that USO is facing serious headwinds at this time – headwinds which I believe most oil investors are currently not monitoring.

To start this piece off, here is a chart of the last few years of returns in USO compared to the actual returns in WTI futures. If you notice, there is a difference between these two datasets in most years. 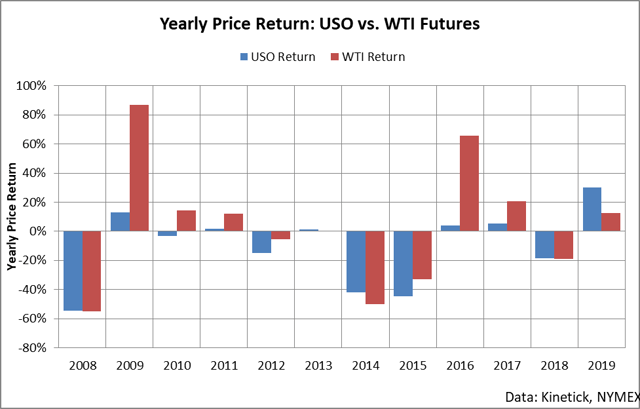 There is a general trend in which USO underperforms the price movements of WTI futures in most years. What this tangibly means is that if you take the percent change in the price movement of crude oil in a given year and compare this change to how much USO moved up or down during that same time period, you often see USO perform below WTI. In some years, this magnitude of underperformance is dramatic – for example, in 2009, we saw USO lag the actual price change in WTI by an astounding 74%. So why is this and what does it mean for today?

The basic concept here is due to something called “roll yield.” Essentially, roll yield boils down to one relatively simple concept: futures prices converge towards spot prices in most markets. What this means is that since USO is holding WTI futures, the relative pricing between WTI futures and the spot price of crude oil will tangibly result in gains or losses in the shares of USO.

How USO works is that it holds exposure in the prompt WTI contract until two weeks before expiry. At this point, it will begin a rolling process in which it sells out of its front position while simultaneously buying into the second-month futures contract. What this means is that for a period of about 2 weeks (half of a month or so), USO is holding exposure in futures contract which is not the front-month contract.

This may seem like needless minutia but it is incredibly important in that this is the primary reason for the difference between the two bars in the prior chart. In other words, over lengthy periods of time, the actual return USO earns from its front-month position is materially different than the return it earns while it is holding the second-month futures contract.

The reason for this is that futures prices move towards the front of the curve in what is known as “convergence.” Basically, this means that if you have prices increasing in value along a futures curve (called contango), you will generally see losses as your higher-priced futures converge towards the spot price. Contango has been the market state in 78% of all months over the last decade in WTI futures. In other words, USO has seen negative roll yield almost all of the time since it is typically holding higher priced futures which are declining in value to converge towards the spot price.

This issue in and of itself is why USO has underperformed WTI in most years – USO is holding futures along the curve and these futures contracts are generally in contango and therefore declining in value towards the spot price in most months. But there are a few periods in which something called “super-contango” absolutely crushes returns in USO.

The prime example to keep in mind here is the 2009-2010 period in that it was the last time we saw WTI futures price in the current level of contango we are experiencing now. 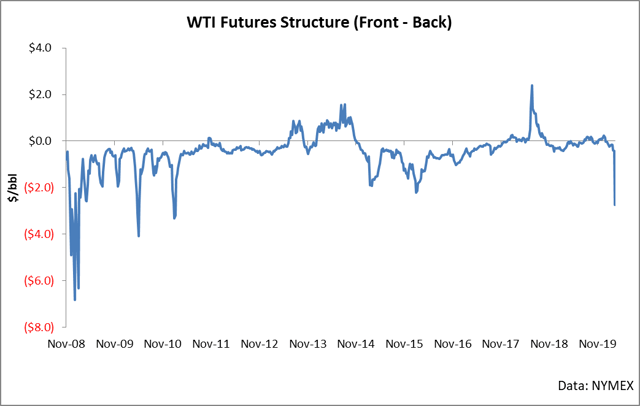 The precise calculation of roll yield cannot be known because it relies on the convergence in the pricing of two free-traded commodities. We don’t know how fast or when the convergence will happen. We don’t know the degree of contango or backwardation that will be left in the curve when expiry actually occurs. And we don’t know what the futures curve will look like at a later date (unless you have a functioning time machine). But we do know that the relationship of futures prices converging towards spot occurs in almost every forward market and is a phenomenon so prevalent that some investors have programs built around trading the concept. Additionally, many academic papers have been written about this topic, so it is thoroughly established in financial academia (to see a few, just type “roll yield” into a site like SSRN – here’s a good one).

Despite the uncertainty surrounding the measurable impact of returns, we do know that a general rule of thumb of a simple annualizing of the current percentage of contango puts you in the ballpark of what kind of expectation investors can have when it comes to losses or gains from roll yield.

For example, if the front two futures contracts are in about 1% of contango during a year, you will likely see USO underperform WTI by about 10-15%. As a quick check on this – since 2008, WTI has averaged about 1% of contango and USO has underperformed WTI at an average rate of 14% per year. It’s not precise math, but it’ll get you in the ballpark of how USO will actually perform in a given year versus futures.

And here’s where things get very, very serious. Here is the same chart as the last chart, but shown in percentage terms. 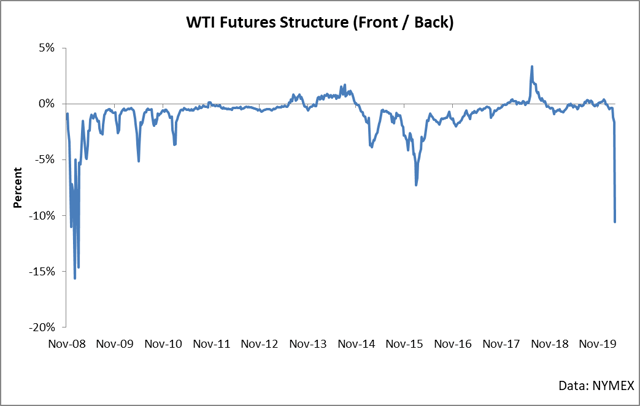 This chart only uses settlement prices, but at the time of writing, we are currently sitting at a prompt contango differential of an astounding 29%. In other words, front-month futures are currently sitting 29% below the second-month futures contract. This is very, very bad for holders of USO because it indicates that roll yield is poised to significantly impair returns.

For a comparison here, check out the last time we were trading at these levels of contango: 2009. During 2009 we saw USO underperform WTI futures by a whopping 74%. To understand this number, this tangibly means that if WTI’s price didn’t change at all during 2009, USO’s shares would have declined in value by 74%.

And it is incredibly important to note that this very strong contango only occurred in the first few months of the year. In other words, a few brief months of contango in the 10-15% range led to USO underperforming WTI by 74% for the entire year. We are currently sitting at contango levels which are about twice this.

Again, the quick math of roll yield is that you annualize the differential between the two contracts to get the effective rate of return at which USO is losing or gaining from roll yield. At present, the simple math of a 30% level of contango between the first and second month annualizes to a 99% loss in a given year. In other words, USO is currently losing from roll yield at an annualized rate of 99% per year. Put simply, this means that if we see the current market conditions carry forward throughout the next year, USO will underperform WTI by around 99% - if WTI increases by 15%, USO will likely drop by around 84%. Assuming this level of contango carries forward, of course.

It is highly important to stress that this is making no statement regarding the actual price of WTI. This is entirely due to the rolling methodology of USO. It is shifting exposure into futures contracts which are 30% above the front-month contract and this 30% shrinks during the month, which means that USO is losing value simply due convergence. The daily movements of WTI can mask this relationship, but over a period of weeks and months, it becomes very clear since this relationship is played out month after month. This is a critical concept for investors to grasp during these times because we simply have no idea how long this relationship will continue. If we see 30% contango continue for even a few months, USO could lose almost all of its value.

This may seem outrageous or even impossible - but perhaps an example from another market will help. If you check my post history, I write frequently about volatility ETFs. In the volatility markets, you tend to see about 5-10% of contango in the VIX futures and ETFs exposed to the front two contracts drop at a rate of about 50% per year. WTI futures are currently 3-6 times these levels - levels which typically result in losses from roll yield of about 50% per year.

Granted, this strong contango is likely not to last for an entire year – but it will almost certainly last as long as quarantines continue. This is the fundamental catalyst around which I am framing up this strongly bearish trading recommendation. When we see a recovery in crude demand, we will see contango decrease because contango is indicative of an oversupplied market. However, the current fundamentals are showing that we have likely just started the downturn. 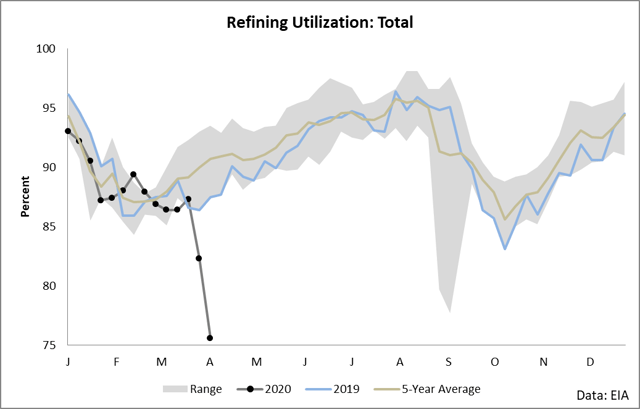 Until we see refining demand back into the 5-year range (or at minimum climbing in that direction for several consecutive weeks), then I believe a strongly bearish bias on USO specifically is in order. The simple reason here is that roll yield is so dramatically strong that over the next few months, it will be a huge driver of returns in the ETF.

And note – this analysis is for USO specifically. Other oil ETFs (like my favored DBO) can actively shift exposure and they are not caught up in the front two contracts, which means that roll yield will not impact other strategies to the same degree.

Until we see structure normalize, the best play is to stay on the sidelines.

Unprecedented levels of contango are currently in the crude markets which is a strongly bearish signal for USO. USO’s methodology confines it to only hold exposure in futures contracts, which are heavily in contango due to the supply glut. Roll yield is poised to strongly impair USO’s shares, which means that price is likely headed lower from here.

QuandaryFX
6.07K Followers
I work within the trading and money management industry. I have been trading and investing for several years. My style is technical execution with a fundamental thesis in place. I rely heavily on statistical analysis of the correlations between fundamental changes and price movements for generating most ideas.