The fear of an economy disrupted by coronavirus has pushed a lot of investors into "safe havens" such as consumer staples or utilities. The most important utility of all, water is an essential commodity that we need to live. While companies such as water utilities can provide immense stability through all economic scenarios, the typically modest growth of utilities can make valuation an ultra-important consideration. American States Water Company (NYSE:AWR) has become excessively overvalued as of late. Trading at excruciating multiples, investors are at risk of wealth destruction when P/E contraction eventually occurs - rather than the safety that investors craved in the first place.

Note: Our initial and overview coverage of American States Water can be found here.

American States Water has been a bit of a roller coaster over the past year. The stock has surged from the high $60s to as high as $96 per share. Shares then became extremely volatile in March, whiplashing to both ends of the stock's 52-week range. 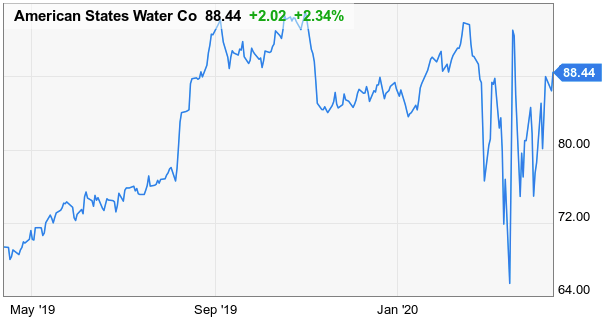 If we look at analyst projections for 2020 earnings, American States Water is projected to earn approximately $2.28 per share. This results in an earnings multiple of 38.78X the current share price. There are a number of significant issues with this multiple that should cause investors to wince.

For the stock itself, trading at almost 39X earnings is a sharp departure from historical norms. Over the past decade, American States Water has traded at a median P/E ratio of just 23.85X. Despite the fact that a low interest rate/yield environment has elevated valuations of dividend payers for years, the current earnings multiple is still 62% above that median P/E ratio.

When there is such a drastic departure from a historical baseline, the next logical step is to question: why? There could either be a logical reason why a stock is trading so far above/below its baseline, or it simply could be an aberration that will eventually revert towards that historical baseline.

In the case of American States Water, it's difficult to find enough justification for such a premium. Sure, utilities are stable business models, but you simply cannot sustain such a high earnings multiple without significant growth. However, American States Water isn't a growth stock.

Over the past five years, revenues have been virtually flat while EPS has grown at a mid-single-digit rate. Despite this, the stock's appreciation has far outpaced this performance. And over the next five years, analysts are projecting the company to grow earnings at just a 6% rate. 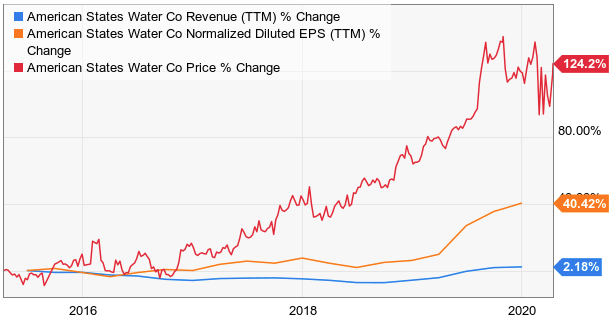 The lack of growth is simple to explain. Although a critical resource, water consumption is largely tied to population growth. People use roughly the same amount of water regardless of the economic scenario. Revenue growth is tied to how many people there are in a utility's service area, and a modest increase in the price of water - which is largely regulated.

So if we establish that the stock is valued at a multiple higher than what its long-term performance can justify, what would a reversion to historical norms look like? Let's assume that over the next five years, the stock gradually reverts to its 10-year median P/E ratio of 24X earnings. We will also assume that the stock's EPS continues to grow at a 6% rate over that time frame.

If we use 2020 analyst estimates and project through 2024, the company would earn approximate EPS of $3.05 in 2024. The resulting stock price at that point would be $73.22. That means that after five years (not counting dividends), investors are looking at capital losses of 17% on their initial investment. Despite a steady and growing business model, a poor valuation decision ended up destroying wealth over a five-year span.

So where should shares be trading? Because of the stability inherent in a utility, we don't necessarily need a huge margin of safety in a potential investment. With that said, it's difficult to support any multiple that could be mistaken for a high growth company because American States Water will grow modestly moving forward. We like the stock at approximately 20X earnings, a potential target price of $45.60 per share. While that represents a significant haircut to the current share price, it's a more realistic reflection of what American States Water is - a safe, but modestly growing utility business. Don't let valuation take the safety out of such an investment.

Wealth Insights
12.84K Followers
I provide straight forward insights on stocks and markets using fundamental analysis and common sense. - Bachelor's degree in Business Administration with a concentration in Financial Analysis. Been investing and following the markets for more than a decade.- Wealth Insights is an investor, and investment author. His content is not geared to anyone's specific investment goals, time horizons, or risk tolerance. Content is for illustrative purposes only, and is not intended to displace advice from a fee based financial adviser. It is not to be taken as investment advice, or influence investor decision making. Accuracy of data is not guaranteed.