Spot VIX has ticked up back across the 40-handle, as Tuesday's gains look set to dissipate on Wednesday morning for the major US averages (DIA, SPY, QQQ, IWM).

WTI (USO) is now trading at less than $20/barrel - which may be taking its own toll on equity sentiment. 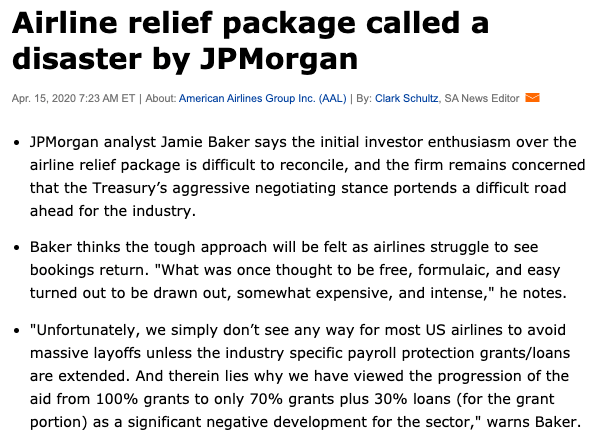 The interaction between policy, employment, profitability, and markets is never easy to predict, and one needs to bear in mind that it may be difficult (more likely, impossible) to please all stakeholders.

Without question there would be disruptions if some of the major airlines (AAL, DAL, LUV) declared BK. But it isn't as though the planes would somehow self-incinerate. Someone would own the assets; I am being somewhat tongue-in-cheek here, but it may be good for the Treasury department to play at least some hardball with corporate America. All kinds of distributional issues and long-run moral hazard problems emerge if anyone can approach the government for public support.

To be clear, I do in fact want to see the economy and public pathos return to normal as soon as possible, and some government aid to the airline industry seems to be in keeping with a swift return to the former state of affairs. I don't have it out for the hardworking individuals in these industries, and I hope that most of them would be first to agree with me that we want to get the solution "right", to the extent that such a goal is ever reachable.

While the private and public sector attempt to arrive at a workable solution set, the UST yield curve is quite flat, and more importantly paying fixed income investors near-nil in yield.

When one hops across the pond to peek at European "yields" - or guaranteed losses on savings instruments - US instruments look positively appetizing, as they have for some years. The message from the bond market, however, does not seem to be lining up so well with the message from risk assets, where many of the steep losses incurred between mid-February and late-March have largely reversed.

It is important to remember that secondary markets get to do just about anything they want, and they don't have to ask for permission, justify movement, or plead forgiveness.

Naturally we want to see some semblance of logic between what is happening between the stock market and the broader economy, but absent that, often a sort of trader-ease takes hold with loopy jargon. The jargon wouldn't exist unless traders and investors had observed, or at least perceived, that such rules of thumb were merited. Just keep in mind that volatility in and of itself is symmetric, and that we inhabit a state of affairs where some pretty high-stakes market moves (higher or lower) can take place without giving notice.

It is quite rare for me to highlight economic reports in the term structure segment of my bulletin, but I'll make an exception here. Note that, even with some very dim expectations and a wide range, the actual figure came in decently outside of the low point of the consensus range. 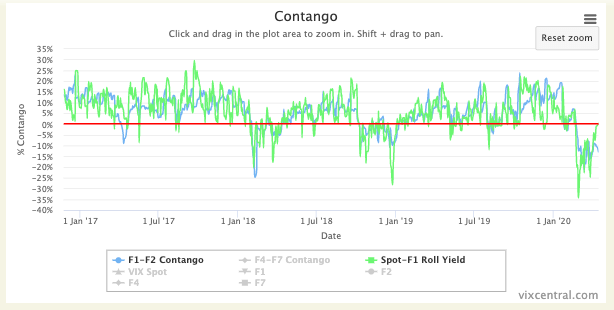 This does not signify what risk assets such as US stocks have to do, much less create obligations for the VX term structure. But it does highlight why it may be challenging to get VX futures to dip much from this point, at least for awhile. Getting VIX from 80 to 40 may turn out to be significantly easier than to move the dial from 40 down to 20. This especially so as earnings season is upon us.

Recall that roll decay, which generated a deleterious effect for long-vol plays (VXX, UVXY) for much of the last ten years or so, now harms the short-vol position (SVXY).