Disney (NYSE:DIS) may end up being one of the hardest-hit companies in this post-coronavirus world. It seems hard to find a part of their business that isn't getting severely impacted, with the exception of their streaming service. It likely means the company will see a dramatic impact on its revenue and earnings outlook.

Analysts have been slashing their revenue estimates for the company. Since January 15, analysts have been cutting their revenue outlook for the fiscal year 2020, by 12.4% to $71.7 billion. Meanwhile, earnings estimates have dropped by 41% to $3.20. The bleak outlook for the company is likely the main reason why options traders are betting the stock falls below $90 by the middle of May.

It seems safe to say that the theme parks, experiences, and products segment is likely to see a significant hit to its revenue, as well as the studio entertainment.

With the absence of live sports, the media division could see a decline in advertising revenue, which was $2.0 billion in the first quarter. In theme parks, the company had revenue of $2.1 billion from admissions and about $1.6 billion from resorts and vacations. Meanwhile, food and beverages and merchandise sales were $2.3 billion — these are likely the business units that will see the most impact. Theatrical distribution had revenue of $1.4 billion. That equates to nearly $9.4 billion of the $20.8 billion the company had in the fiscal first quarter, or almost 50% of the company's revenue is in danger. How much the total impact will be, we will have to wait and see. Analysts estimate that sales in the fiscal second quarter will be down 18% versus last year to $17.61 billion.

The big question isn't this quarter; it is the quarters going forward and what the potential impacts for the business will be long term. The company has concerns as well, entering into a 364-day credit agreement for $5 billion on April 10. Additionally, on March 26, the company issued C$1.3 billion in votes due in 2027.

Betting On A Decline

The weak outlook is likely one reason why traders are betting the stock falls sharply by the middle of May. The $90 puts for the May 15 expiration date have seen their open interest level rise by around 14,700 contracts on April 8. The puts traded on the ask for about $3.75 per contract. That means that for the buyer of the puts to earn a profit, the stock would need to fall to $86.25, a decline of about 17.1% from the stock's price of approximately $104 on April 15. 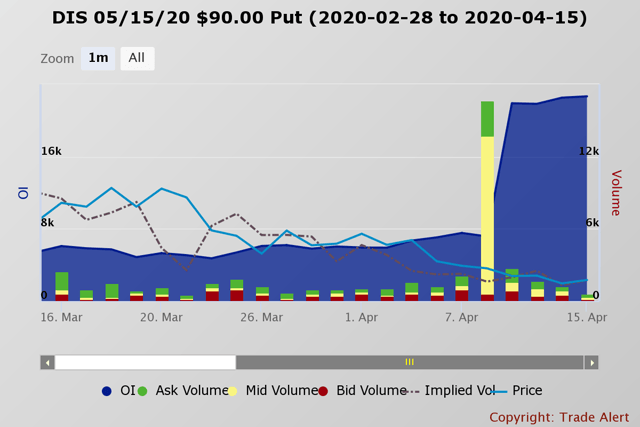 The technical chart of Disney isn't healthy, and the stock has recently hit a level of resistance at $109.25 and has failed on a few attempts to rise above it. The stock is also currently finding some support on an uptrend at $102; should the stock fall below that uptrend, the shares could retrace lower to the next level of support at $92.50. 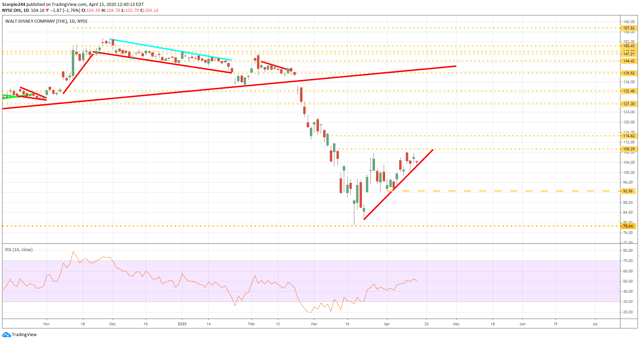 The most significant risk will be how long we stay in this coronavirus environment where theme parks and many of Disney's core operations are closed. It could be for a short period or a very long period. Clearly, the shorter the period of time, the less of an impact the company is likely to see. That means the stock could snap back considerably sooner. However, if it ends up taking a longer time, then it could prove to be even more damaging to Disney.

It would seem at this point, we may end up being in this period for a while, and until we get to a position with more clarity, the risks remain to the downside for the stock it would seem.

Reading the Markets will be hostings its first-ever live webinar on April 16 at 9:00 EDT. You need to be a member to see it, so make sure you sign-up and get your first two-week for free to try it.