After a pretty flat Thursday session, the S&P (SPY) began Friday with a strong gain that appears to be leveling off some as the morning wears on - S&P futures are currently about 50 points off the pre-market highs.

International markets (EEM, EFA) struck a very positive tone early in the session on reports that America may be preparing to reopen.

Spot VIX sits just below 40, about the same as it closed on Thursday 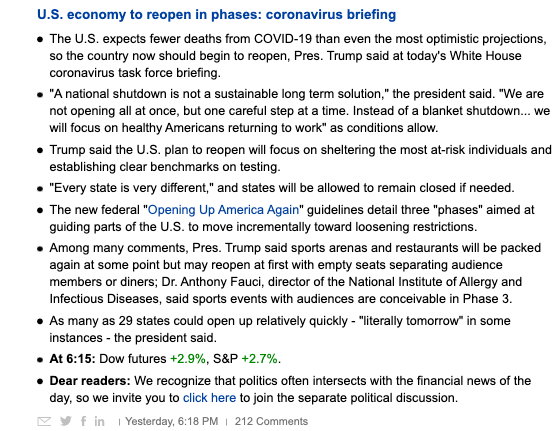 First off, it is wonderful news that the human toll of COVID-19 may well ring in much lower than what some of the more grizzly - and even some of the more optimistic - tallies were predicting.

Let's face it: that creates three other kinds of issues.

The saying "I'd rather be lucky than good" comes to mind, but we still need to realize that perhaps some other less-than-desirable factors led to the nation's stellar outperformance relative to projections.

That's the crazy thing about secondary markets: the link between risk assets that change hands between traders/investors don't have to mirror reality all that closely.

"In the short run, the market is a voting machine. In the long run, it's a weighing machine". - Ben Graham

So the key now is to see whether the US economy itself is capable of such an impressive rebound. If the Financial Crisis is any indicator, one might assess that it will take much longer to get Main Street back up and running; still, every crisis is different. 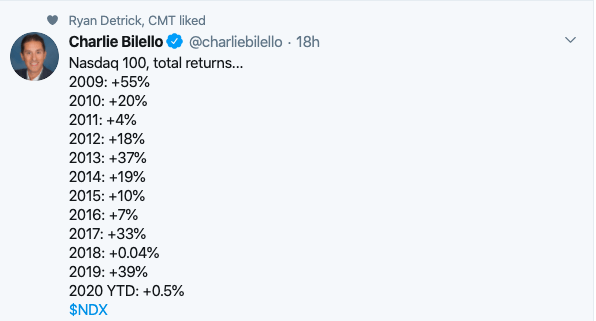 Still, I have to take a moment to marvel at the fact that the NASDAQ 100 is actually up a touch YTD. That's a head scratcher. Sure there are some biotechs in there, and mega-tech names such as MSFT weren't as badly scathed as, say, the S&P on the whole.

But by way of comparison, look at the 2017-18 pair, and then the 2019-20 couple. In light of what the global rate has just suffered, the NASDAQ looks perhaps overly resilient. A modest short position, or perhaps a pairs trade, may be interesting to explore.

There is more than one way to interpret roll decay, David, but broadly I'd agree. Let's take a look. 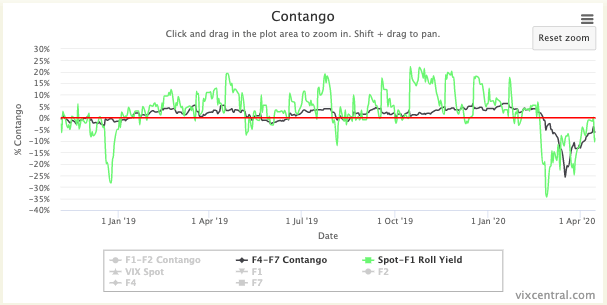 The roll decay on the Spot-F1 has calmed a great deal since last month. What that means is that spot doesn't have to fall from current levels just to break even on a short-vol position such as SVXY; as expiry approaches it is the front month VX contract that "chases" spot, and not the other way around.

To the extent that VX futures are in fact predictive of where spot VIX will be, then the contract may act is a martingale: today's value and the discounted expected value are one and the same.

Many traders would assert that hefty carry is difficult at the very least from a psychological standpoint; that's part of what makes The Big Short such an interesting movie to watch.

What interests me is that the F4-F7 is flattening out, which speaks to a narrowing of expectations for that three-month window as to future spot VIX levels.

WTI (USO) is down almost 9% on Friday morning, near $18/barrel. And yet, the decline from an oil VIX standpoint appears to have become more of an orderly affair.

Once again, we see signs broadly of markets attempting a semblance of "recovery", though perhaps not from a long-only perspective. The last two weeks or so have been very positive for US equities. But even if there is a drop on the horizon, that doesn't have to mean that an accompanying massive spike in vol must coincide.