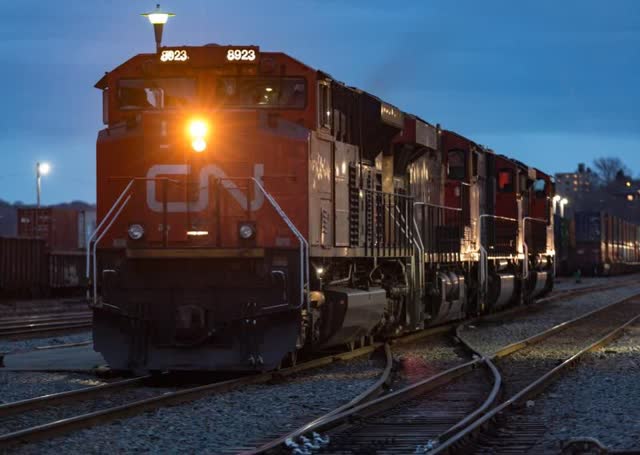 The coronavirus has created serious headwinds for the global economy. Goldman Sachs (GS) predicts a sharp decline in Q2 GDP. Oil prices are falling, partly due to a lack of demand. Rail traffic could be next to take a hit, which could weigh on names like Canadian National (NYSE:CNI). The stock is down Y/Y by double digits and could fall further. 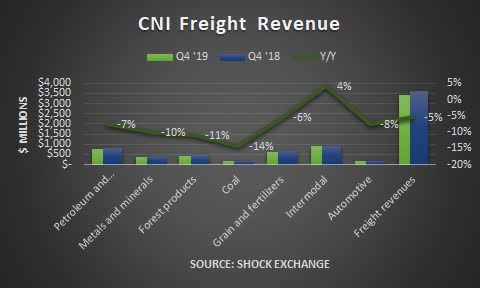 Total carloads fell 7% Y/Y, much worse than the flat growth reported in Q3. Each of the company's product categories experienced a decline in volume. The company experienced a national strike that caused a disruption to its business for over a week:

Noise from the national strike could dissipate just as the global economy is collapsing. That said, rail traffic is likely to face headwinds for a while. 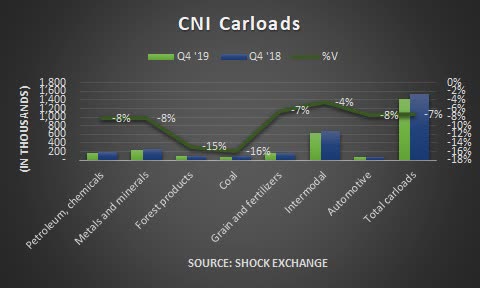 Metals and Minerals experienced an 8% decline in volume due to a decline in frac sand volume and a broad range of metal products. Frac sand volume could decline for the first half of 2020 as the free fall in oil prices has hurt E&P in the oil patch. Petroleum volume was off 8% and will likely fall further as social distancing has hurt demand. Intermodal volume fell due to reduced domestic volume. Intermodal was over 40% of the company's rail traffic. Headwinds in Intermodal could stymie the company over next few quarters.

Price hikes had previously buoyed the Canadian railroads. In Q4, Canadian National's ASP rose 2% Y/Y, yet is was not enough to offset volume declines. 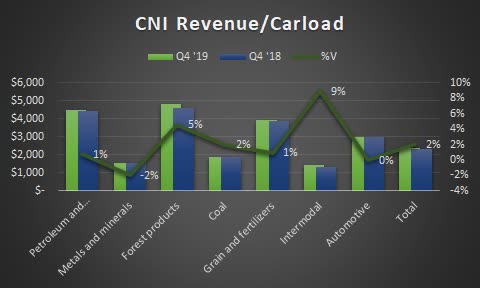 It could be difficult for management to pass through price increases given the decline in rail traffic and a sharp decline in the economy. If pricing gets too out of kilter, then competitive pressure from the trucking industry could weigh.

Canadian railroads have consistently reported operating ratios sub-60%. Union Pacific (UNP) and CSX (CSX) have made deep cuts to operating costs in order to close the gap. Canadian National reported an operating ratio of 66%, up about 400 basis points versus the year earlier period. Total operating expenses were flat, which, combined with the decline in revenue, caused the operating ratio to deteriorate.

Labor costs declined 5% Y/Y, which was less than the total revenue decline. Labor costs were also impacted by the inclusion of TransX. Costs for purchased services rose by double digits. The increase was primarily due to higher repairs, maintenance and materials costs, and the inclusion of TransX. The TransX deal was closed in Q1 2019. By the second half of the year, noise from the deal should dissipate. For now, Canadian National's operating ratio is much higher than normal.

The fallout was that EBITDA of $1.5 billion declined 11% Y/Y. EBITDA margin of 45% was off by about 200 basis points versus the year earlier period. Like its competitors, Canadian National will likely engage in cost containment initiatives. However, with revenue in decline and likely to fall further, I doubt additional cost cuts will improve EBITDA in the near term. Investors should brace themselves for more declines in revenue and margins.

CNI has an enterprise value of $70 billion and trades at 9.8x last 12 months' ("LTM") EBITDA. Its enterprise value is down by over 30% compared to late December. The shares have traded down with the decline in broader markets. I expect its revenue and earnings to decline as rail traffic faces headwinds. These headwinds may not be priced into the shares.

There appears to be more pain ahead for CNI. Sell the stock.