US stocks are off their lowest levels of the session, with the NASDAQ 100 (QQQ) and the Russell 2K (IWM) in the green. Spot VIX has notched back up above the 40 handle.

S&P futures (SPY) struck a low of about 2810 before reversing during the session.

The real story of the day has more to do with futures on the May WTI futures contract. I'll quote the CNBC report directly:

So while there is no shortage of shock and awe over both the percentage loss in the May WTI contract, as well as the absolute level at which the contract now trades (USO), the countervailing reality is that it's a low-volume contract at this point that is providing a rather small glimpse into the greater picture.

What is perhaps more important is the fact that the "peak driving season" contracts are still well below $30/barrel, and that after the historic OPEC agreement to dramatically cut production. An economic recovery may be in the works, but measures such as the oil market appear to be punting as to how soon we may witness such a phenomenon.

Whenever a massive bill - potentially loaded with some pork - is passed quickly, one can imagine that some perverse incentives/motivations are inevitable.

Now it may be the case that the business owner that Mr. Carroll mentions above will be disinclined to invite his employees back to work when the stimulus and support from CARES diminishes or closes out.

I tend to believe that much of the current stimulus is meant to bolster very anemic demand, which is not necessarily inflationary (under circumstances such as these). If the stimulus creates a large-scale disincentive for employees to return to work, however, wages may rise as a result, and prices on finished goods and services could in fact rise.

I am interested in hearing from readers as to how the current stimuli has led to new incentive structures for employees, business owners, etc.

Jeff Cox makes some interesting comparisons between the S&P vs. the Russell 2K, EM stocks (EEM), and the like. But there's been quite a bit of volatility in the S&P, with virtually no net change since April 2019.

This is in fact the essence of the risk-return tradeoff. When investing in risk assets such as equities, returns are only a relatively sure bet in the long run (say, at least 20 years). But in the short run, volatility is far more likely to be a bankable reality. Just so with the S&P this year.

What fascinates me is that the current S&P level is quite similar to where it was last August during the heat of the ongoing trade talks with China. Markets in general were expressing some heartburn over the tone of discussions, nervous about the impact on the global economy. Now that a devastating devourer of the global economy has in fact struck... we're in the same place. ¿Viva La Fed? 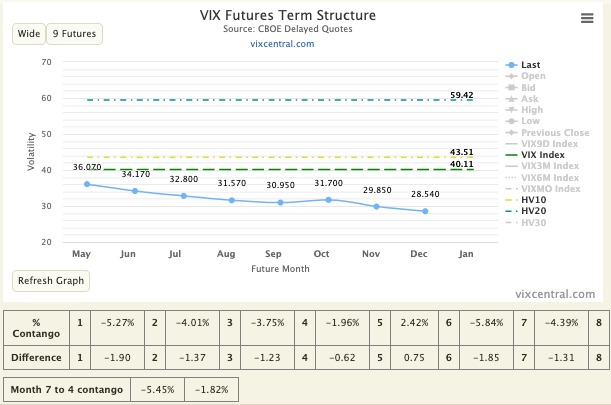 HV20 towers sixteen vol points over the HV10. The S&P, and risk assets broadly, are attempting to simmer rather than jerk around. Note that I am mentioning realized and not implied volatility here; this is a reflection of what has already occurred.

The VX term structure remains below the various measures of realized and spot implied volatility, suggesting a belief that markets will continue to gradually self repair.

With the continued decline in oil prices, even after the valiant attempts by OPEC and Friends to cut supply, the Energy Sector SPDR (XLE) has held up reasonably well. Implied vol has fallen markedly, and in fact not rests pretty well below the 20-day realized vol measure.

If one is of the mind that oil is going to stabilize or rise, then I suppose this set-up looks pretty reasonable. But I am struck by the fact that XLE options may be on the cheap side here, despite pretty high overall levels. I'll be examining the term structure and considering a long-vol play on this instrument.