Peloton Interactive (NASDAQ:PTON) has outperformed the indexes through the first few months of 2020 as investors bet on the "stay-at-home economy."

Peloton hasn't created a revolutionary product, but it has advantage that other failed companies do not have, making both the bull and bear cases plausible. Apple (AAPL) and GoPro (GPRO) are examples of disruptors on opposite ends of the spectrum. We can gain insights from viewing the spectrum of companies hoping to disrupt their respective markets.

Apple's journey to becoming one of the largest companies in the world was jumpstarted by the iPod. The company began building a better MP3 player. In the iPod days, Apple very much resembled a middle disruptor. Like Peloton, the company created a product and a brand that became favorable to its alternatives. It wasn't until Apple launched the iPhone that the company had created a truly revolutionary product that changed the way the world saw mobile devices. Entire infrastructures have been created around the mobile economy, with Apple the centerpiece combining its strong brand presence with its proprietary operating system.

Apple changed the way mobile devices are used in a way that businesses like Peloton have not. The iPhone had far superior functionality than its predecessors. A Peloton bike has the same base functionality as other exercise bikes for a fraction of the price. That's not to say these middle-of-the-road disruptors aren't great businesses, because we can view businesses on the other end of the scale such as GoPro.

GoPro's fate is the bearish case for Peloton. The company created a new product inspiring action sports participants to document their experiences from the first-person perspective. GoPro inspired regular folks to begin snapping up the cameras to capture their adventures using slogans like "Be a Hero." Naturally, competitors emerged, but time proved that GoPro products were a niche product that became a fad, then a commodity. The company failed to build enough around its product in order to shield itself from competitors and to help popularize more action sport activities that are worthy of being recorded on a GoPro. GoPro's rise and fall is a warning to Peloton's management not to rest on their current outburst of popularity.

Companies in the emerging disruptor category are battleground stocks. Apple turned out wildly successful, while GoPro went in the other direction. In the current environment, it's incredibly difficult to assess consumer appetite for expensive premium products. A $2,200 exercise bike with a pricey monthly subscription is not a rational purchase for families facing unexpected struggles as a result of the COVID-19 pandemic. We may find Peloton has not benefited from staying home, but has lost its incremental customer who can't afford Peloton products. That, in itself, doesn't make Peloton a poor investment, but extra caution is needed in sizing these positions in a well-balanced portfolio. In order to do so, further analysis is needed to address what Peloton's opportunity looks like moving forward. While most businesses will gain clarity when the COVID-19 crisis fades, Peloton needs to prove it's not going down the same road as GoPro over the coming years.

The market seems to believe that user growth will see limited effects from the COVID-19 pandemic. The idea of a select group of "stay at home stocks" benefiting from people staying home has worked for traders over the past month but will not work for long-term investors. If anything, we need to be more cautious, as a high premium is placed on businesses with any ability to benefit from government mandated shutdowns.

The centerpiece argument for every disruptor is the end market to which the company is gaining share. For Peloton, the end-market is the $94 billion fitness market. 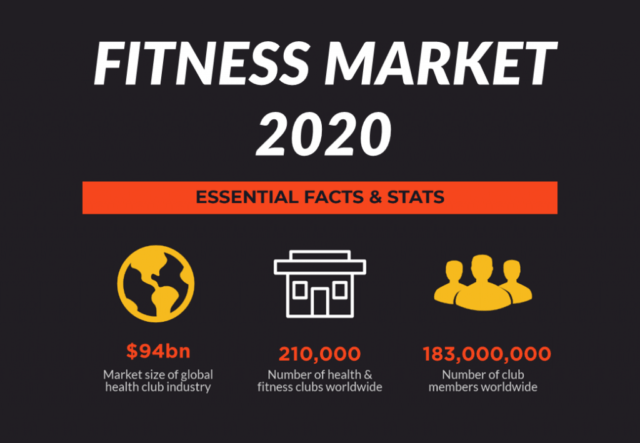 Most disruptors not only gain share on inferior competition, but can even expand the total addressable market. Peloton's 77% growth rate over its previous quarter shows the company's staggering penetration in the fitness market.

Planet Fitness converts 23% of revenue into free cash flow conversion, with about 95% of its near-2,000 clubs being franchise-owned. The company's business is largely asset-light. Although Peloton is burning through cash, its subscription model is intriguing from a long-term perspective if the business has staying power. There's very little comparison to help investors understand what Peloton's margins at scale will look like. This presents a risk that makes Peloton's business rather speculative. In addition to this challenge, the stock has had quite a run as a top "stay-at-home" stock.

On the other hand, Peloton's long-term prospects are intriguing. Should the stock return towards the $20 level, it becomes an interesting speculation. Peloton has created a brand that resonates with health-conscious individuals who want the health club experience from home. Its brand strength amidst the crisis may drive customer adoption amongst those with the means to purchase a high-end exercise bike. Google Trends indicates people are certainly more interested in learning about Peloton than usual for this time of year. But again, GoPro had a similar showing at the height of its popularity. 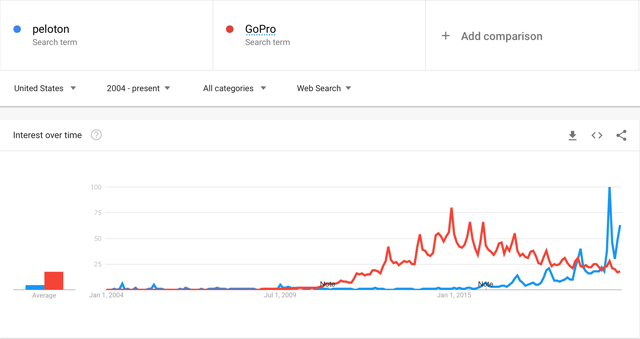 The fad argument is the real concern for Peloton investors. The uncertain margins are a concern, but I'm confident Peloton will figure out how to make money off a subscription business if the company can avoid the GoPro fate. But betting on Peloton means attempting to forecast consumer behavior towards the product. Its subscription is not cheap at $39 per month. There are ample alternatives, and it remains to be seen whether or not users will stick with Peloton over the long term.

In my opinion, what could separate Peloton from GoPro is social features creating a network effect on the Peloton platform. Peloton enables users to integrate their Facebook accounts to add friends, and it also integrates with workout platforms like Strava so users can track their fitness progress. It also taps into the natural human competitive nature by providing leaderboards in classes. Badges and challenges are also part of the Peloton platform that keep users on board and continuing to work on digital goals. I would like to see the company continue to expand on these features, perhaps chat functions that allows users to communicate during class warm-ups and cool-downs. One user describes what makes Peloton different.

To think of Peloton as an exercise equipment manufacturer is a mistake. They are a content company, and it is their library of content at is the driver of their success.

Exercise content and bikes have been around forever though. It is the integration between the bike, content, and importantly, unlocking personal and social competition that is where their secret sauce is brewed.

Peloton bears like Citron Research have a point if management is unable to expand its network of social features that makes the platform special. It's entirely possible that Peloton goes the wayside along with other fallen heroes like GoPro. But the upside scenario is that Peloton rides its network effects and superior content to continue to eat into the health club market. Peloton will remain a battleground until there's clarity regarding user retention over time.

I'm confident enough in Peloton's additive features to differentiate the platform enough to have staying power. But at the current prices, I don't feel like I'm getting a deal. The valuation is rich for the amount of uncertainty present. The end-market is not compelling enough to make Peloton a big position regardless of the valuation. But should it retrace towards the $20 lows, continue to build social features into the platform, and show no user degradation, then Peloton makes for an interesting flyer.

Joseph Kowaleski
1.42K Followers
Intern at an investment management startup/student at Rowan University. My investment strategy is growth centric, buying businesses that have a strong ability to generate cash, trade at a great price, have significant competitive advantages, and fundamental utility to customers. Always do your own due diligence before investing.

Disclosure: I am/we are long AAPL, FB. I wrote this article myself, and it expresses my own opinions. I am not receiving compensation for it (other than from Seeking Alpha). I have no business relationship with any company whose stock is mentioned in this article.