Another 1%+ session (on an intraday basis at least) as US markets (SPY, DIA, QQQ, IWM) yo-yo once more in Thursday trade; range-bound market activity appears to be the new norm.

Also, spot VIX continues to hug the 40 handle, though earlier in the week the metric managed to near 50. 40 is quite a high number to hover near for any stretch of time, yet here we are. 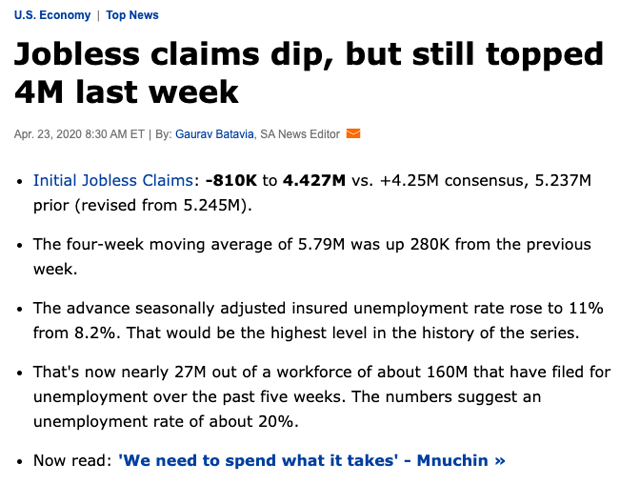 Nearly 27 MM out of work in just a matter of a few weeks - breathtaking! If equities are any judge on the matter, most of the newly unemployed will find themselves back behind the proverbial desk in weeks if not days.

It is worth remembering that the stock market is often viewed as a leading economic indicator. I'm hinting at the fact that perhaps stocks really do have their collective prognosis correct, and the US economy will swing smartly back in gear. Both fiscal and monetary policy appear to be doing their best to make it so.

Still, what makes the bet so dicey is that I suspect there is a limited shelf life on the matter. For the time being, policymakers and risk assets seem to have one another's backs. But investors are fickle, and the economy really will need to see renewed activity in order to mount a rapid turnaround. 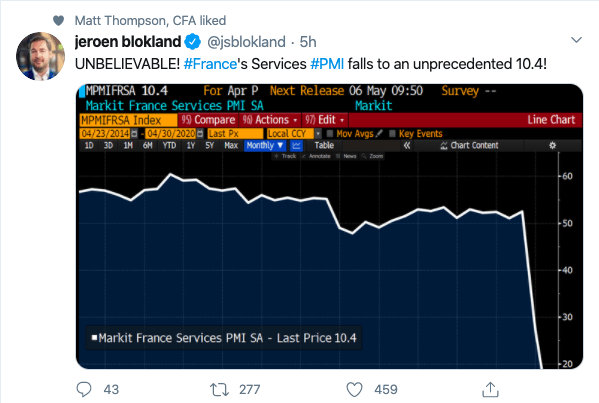 Don't look now, but death count and number infected in France (at least officially) is soon set to overtake Spain; the population of the former is about 33% larger than that of the latter, and so a head-to-head comparison may not be appropriate.

But there is no denying that the economy has been hard hit. EU nations, particularly members of the Eurozone, will likely come up with a way to share the enormous economic burden levied by the virus. Figures such as the one featured above makes me leery about trusting the resilience of risk assets, and help to justify the sustained heights in implied volatility readings.

From the standpoint of the actual treatment of the virus itself, however, at least some countries may be turning a corner.

The figures are still high in terms of pushing elected officials to relax lockdown standards in what is one of the Top Five national tourist destinations in the world. But the trend is at least moving in the right direction, and progress needs to be acknowledged and celebrated. 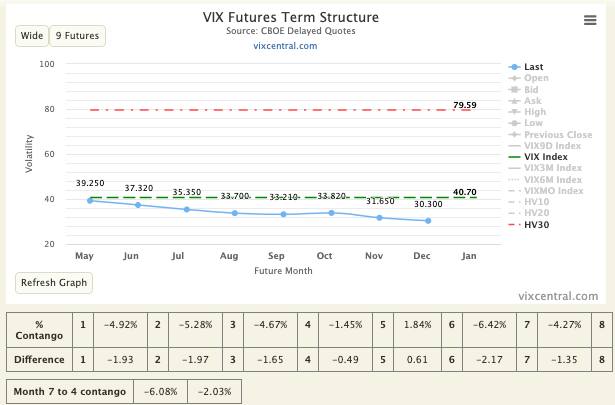 We've come a long way in thirty trading days in terms of realized volatility; spot implied vol rests about halfway below the HV30 measure. From this perspective, the spot implied and VX1 figures are practically hugging. For one of the rare instances of the last couple of months, it would appear that roll decay is soon set to favor vol shorts (SVXY) as opposed to longs (VXX, UVXY).

On that note, the term structure on the SVXY is the flattest that it's been since the inception of the market blowout associated with the crisis.

This can be ideal from the standpoint of setting up "horizontal" spreads on the product. The current implied vol measure rests at around 45, and the term structure across the board essentially rests between 45 and 47 according to MarketChameleon.

Time spreads, double diagonals can really make sense on the product here. The direction of the trade, of course, depends on your view of where you see things going from a vol standpoint.

Debit time spreads involve buying the long-dated contract, and as such collect theta (time decay) while having a long-vol bias (positive vega).