Pinduoduo’s (PDD) meteoric growth in the past few years has been incredible, with revenues increasing from $268 million in 2017 to $4.32 billion in 2019. The personalized interactive interface for customers and team buying discounts targets customers in lower-income areas to fill in gaps left by Alibaba (BABA) and JD.com (NASDAQ:JD). After watching Pinduoduo’s huge revenue growth, JD.com launched JingXi, an almost identical platform, to capitalize in the same lower-income target cities as Pinduoduo, and JD.com’s impressive logistics could propel JingXi growth beyond Pinduoduo.

Both Pinduoduo and JingXi are accessible through WeChat’s shopping portal and standalone apps. Opening interface shows promotions, categories, and deals of the day (¥1 RMB for JD.com). The image below shows the link between WeChat to JingXi, and how the platform looks upon opening. 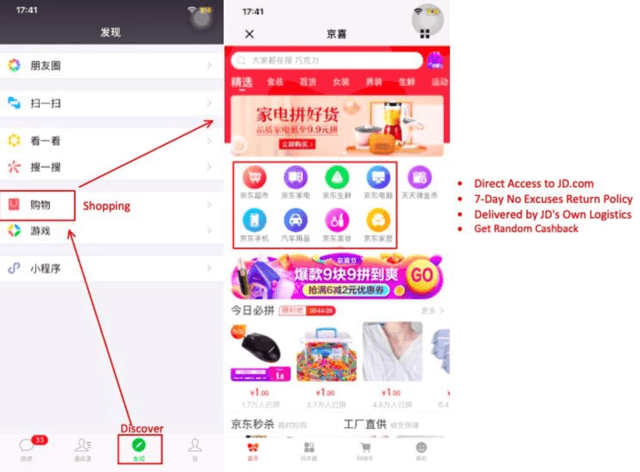 Pinduoduo’s platform looks very similar - although a bit more personalized in the top promotion space, the opening page has links to popular and other categories on the top, promotions and team buying in the middle, and recommendations and search at the bottom. When looking for products, a user can see if friends had shopped there, what other discounts or promotions are available with the item, and more.

Unlike other platforms, Pinduoduo and JingXi allow users to create “teams” of other users, friends or family and purchase an item “in bulk” to receive a discount. For Pinduoduo, prices for both and individual purchase and team purchase; after a team purchase has been initiated and invitations sent, the purchase must be made within 24 hours to receive the team discount. For JingXi, new users are offered different deals for ¥1 by getting friends to join the purchase. For Single’s Day, JingXi offered of these ¥1 deals to draw in customers.

Differences in the Two

Pinduoduo has pioneered itself as the fun, social way to shop, and has incorporated games on its platform to earn rewards and boost engagement. Duo Duo Orchard allows users to play to earn free fruit rewards, while Duo Duo Farms helps farmers to boost customer interaction and chains, farmer incomes and sales of products by selling straight to the consumer.

Livestreaming is huge in China, and JingXi has a livestreaming function in which influencers stream themselves using and trying new products to help raise purchases of those products. During the livestream, potential customers can ask the host questions and buy the product in real-time; after the stream ends, other uses can replay the videos. It’s almost a first-hand watch-and-review session in which users can earn feedback instantaneously to understand products and drive purchases after seeing it tested by someone else. 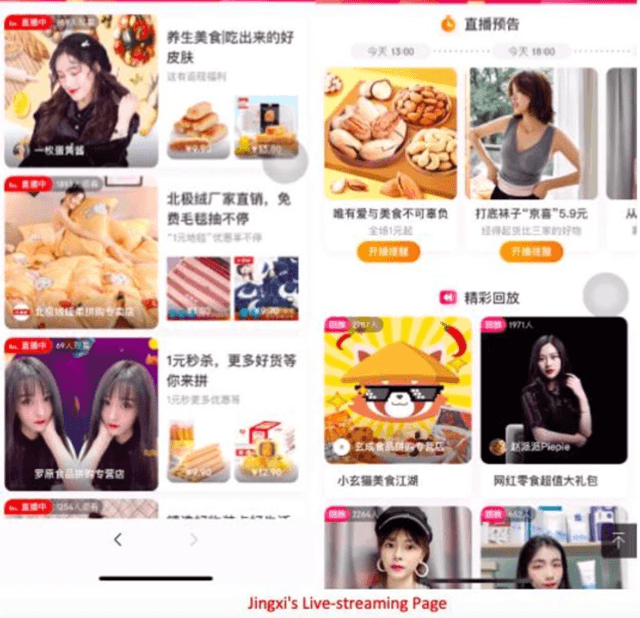 Pinduoduo does not mention any product trial ability on its platform, while JingXi has a tab allocated to the different products that users can try for a limited period of time for free or a very reduced cost before actually making the purchase. Since JingXi targets lower-income cities, the ability to test a product before buying can be vital, especially if the product is expensive (phone or tech) and constitutes a large portion of the discretionary income of the consumer.

Why JingXi Can Be More Successful

JingXi has already shown signs of being a key driver of traffic for JD. During the Single’s Day promotions, “nearly 40% of new customers to JD came from Jingxi, while over 70% of Jingxi users came from lower-tier cities [and those] users placing orders increasing 60% YoY, and over 70% of new users on JD living in lower-tier cities.”

JD has superior logistics, probably the best of its class, with the ability to deliver nearly all products on the same or next day. For the last Single’s Day promotion, “90% of China's administrative districts and counties achieved same- or next-day delivery speeds, the number of orders fulfilled by automated warehouses increased 108% YoY, and 92% of first-party orders were delivered same- or next-day.”

JD’s logistics networks are not solely focused in high-income cities. Front distribution centers are located not only in top-tier cities but also in less-populated cities like Lhasa. JD has over 700 warehouses that allow it almost full coverage of all of China’s districts. The company conducts most logistics needs in-house, only resorting to third-party couriers to reach areas that its network does not extend to. A majority of orders are delivered to customers directly from JD. 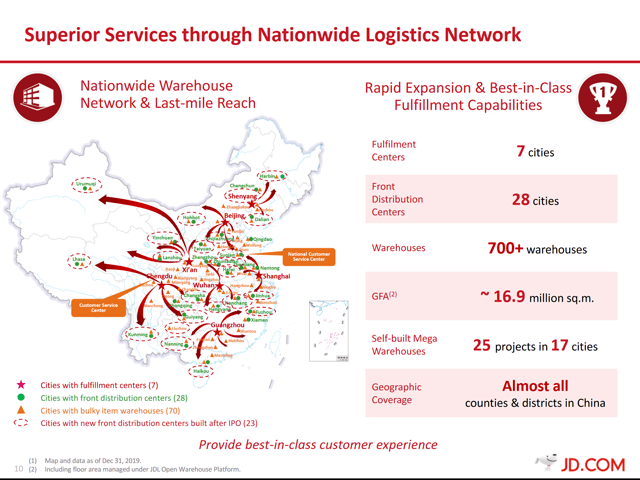 Pinduoduo has risen rapidly in the past few years, with the second-highest number of active accounts behind Alibaba. JingXi, JD.com’s near-carbon copy of Pinduoduo, has already added large value to JD with customers in lower-tier cities. Where JD can overtake Pinduoduo lies within JD’s extensive, top-class in-house logistics, with ~90% of goods being delivered same or next day, while Pinduoduo, as a mobile start-up, does not have the same in-house infrastructural base like JD.com. Pinduoduo, as a mobile app, is new and has just over $4.3 billion in revenues, and although revenue growth has been outstanding, Pinduoduo does not nearly have the same conglomerate model. JD.com’s international range, segments ranging from tech to retail to financial, and overall revenues of $82.5 billion provide more value than Pinduoduo’s competition-susceptible concept.

Mobility Matters Research
6.15K Followers
Your hub for everything mobility related. Coverage will primarily focus on the automotive industry, namely EV, and will touch upon charging, infrastructure, AV, eVTOL, and other mobility sectors.  Feel free to reach out with questions or comments!