Readers that follow my work probably recognize that I like breakout stocks involved in the area of digital transformation. We are in the midst of a seismic shift towards the cloud and online retail, accelerated by the pandemic. Thus my interest in this area of investing.

There is much to be said for investing in breakout stocks. Such stocks are recognized by the markets either due to specific events, changes in company fundamentals, or change in the macroenvironment. As a technical analyst, I relish such movers because stocks that aren't movers tend to suck up dead money, even if they are exceptional companies. You can wait a long time to see a return on investment or you may even be investing in a value trap.

While I like breakout stocks, they are volatile and hence risky. It is important to separate the real deal from the head fakes.

In my latest weekly list of breakouts, I added Shopify Inc. (NYSE:SHOP), an e-commerce stock that has most certainly benefited from the pandemic with a recent breakout to an all-time high.

And here is where I make my confession and beg for mercy from my followers. Back in September, I gave Shopify a bearish rating. 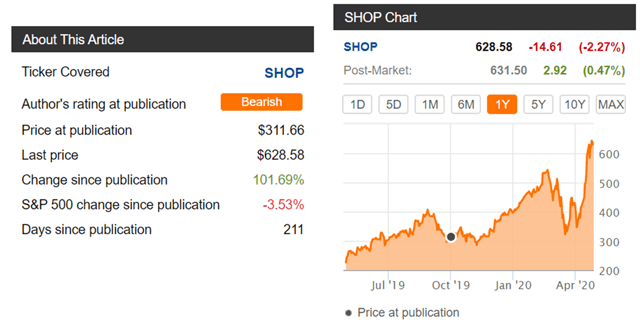 I believe that this may have been my worst call ever, as the price of Shopify stock is up 100% since the article was published. For me, this serves as a reminder that being bearish about a digital transformation stock is seldom a good idea. On that note, I am changing my rating to neutral. I still can't be bullish on this stock and the reason is that when the government sugar rush ends, and it will end, we will be in a global recession.

When the music stops the government handouts will have been spent, many workers will return to work and not have time to surf the web, and the rest will be unemployed and broke. I don't expect the economy to rebound this year. In all likelihood, it will take two or three years to get back to 2019 levels of GDP. Shopify's business is substantially built around merchant transactions, more so than recurring revenue which is now less than 50% of revenue. This is a short to mid-term negative factor for Shopify if or when we enter a global recession. 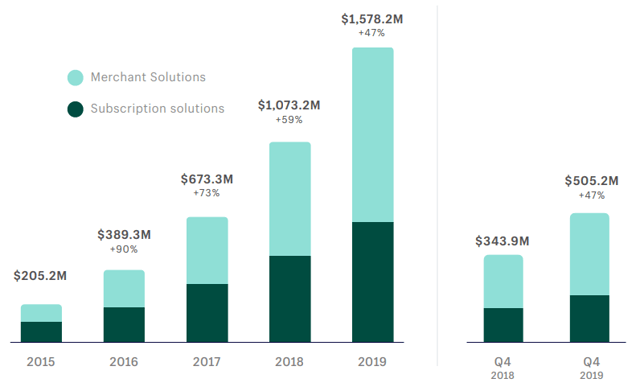 When Shopify announced the acquisition of 6 River Systems, the stock price began a significant bull run, in spite of my warnings about its fulfillment strategy. I get it. Investors and analysts believe in the field of dreams. Build the network and customers will come. Shopify will follow in Amazon.com's (AMZN) footsteps.

But the Q4 earnings results call should really have put an end to grandiose thoughts of Shopify's Fulfillment Network. By the way, as a tip for investors, ignore what the CEO has to say during earnings calls, and focus on what the CFO has to say. The CEO is the visionary, the CFO is the realist.

Here is what the CEO said:

Combining our economies of scale with the automated fulfillment technology from 6 River Systems, we will enable our merchants to better compete with the largest businesses on the planet, while revolutionizing the fulfillment industry as it shifts from pallets to parcels.

... we expect to build out a Shopify Fulfillment Network to take five years from the early access program launch in mid-2019, costing approximately $1 billion. Most of this spend is expected to be variable based on the cost of fulfilled goods. We expect the Shopify Fulfillment Network to be dilutive to 2020 adjusted gross profit, given growing but still limited scale in terms of volume while in the product market fit stage.

... We are directing a small portion of the $1 billion to open a small Shopify-run R&D center in Ottawa, so our product teams can learn fulfillment firsthand, including trialing new warehousing and fulfillment technology. This R&D center, of course, includes technology from 6 River Systems, which we expect will prove increasingly valuable to Shopify Fulfillment Network

While the CEO believes that the company is revolutionizing the fulfillment industry, the CFO has indicated that the company needs to proceed slowly, setting up an R&D facility and "learn fulfillment first hand." The company bought a toy called "Chuck the robot" for $450 million and now it is trying to figure out what it got itself into. As I explained in my last article on Shopify, fulfillment is a cost center, not a profit center.

Stock Valuation - A Matter of Perspective

There are numerous techniques for valuing stocks. Some analysts use fundamental ratios such as P/E, P/S, EV/P, or EV/S. I believe that one should not employ a simple ratio, and the reason is simple. Higher growth stocks are valued more than lower growth stocks, and rightly so. Growth is a significant parameter in discounted cash flow valuation.

Therefore, I employ a technique that uses a scatter plot to determine relative valuation for the stock of interest versus the remaining 152 stocks in my digital transformation stock universe. The Y-axis represents the enterprise value/forward sales, while the X-axis is the estimated forward Y-o-Y sales growth.

The plot below illustrates how Shopify stacks up against the other stocks on a relative basis. I have also highlighted Amazon.com for comparison purposes. 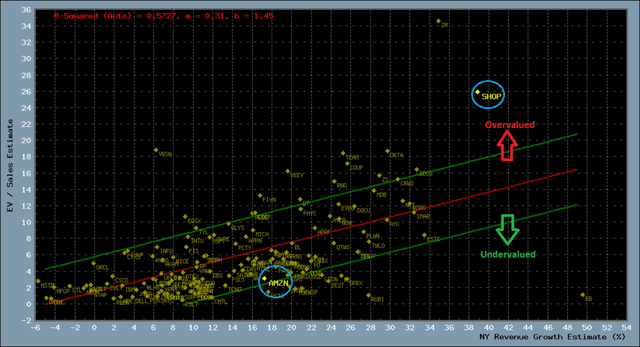 A best-fit line is drawn in red and represents an average valuation based on next year's sales growth. The higher the anticipated revenue growth, the higher the valuation. In this instance, Shopify is situated well above the best-fit line. This suggests that the company is extremely overvalued on a relative basis.

Critics will no doubt argue that Amazon.com is not in the same business as Shopify. But they are both e-commerce businesses and Shopify's recent foray into fulfillment turns Shopify into a "future Amazon" in the eyes of many investors.

From the above scatter plot, you can see that only Zoom (ZM) is more valued than Shopify in terms of forward sales multiple. The Zoom stock price has benefited greatly from the work-from-home (WFH) directive that most companies are required to follow.

Valuation gets more interesting when you factor in gross margin. Shopify has a gross margin of ~57%, a low figure for software companies. This is due to the low profit margin for its merchant solutions.

Now, when I generate a scatter plot using the forward gross profit multiple instead of forward sales multiple, Shopify becomes the most expensive valuation in my digital transformation stock universe. It is even more expensive than Zoom! 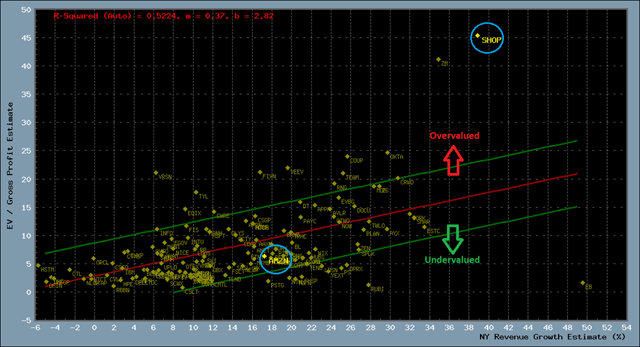 While Shopify is extremely overvalued by its forward gross profit multiple, it is actually undervalued when you consider analysts' estimates for next year's earnings. 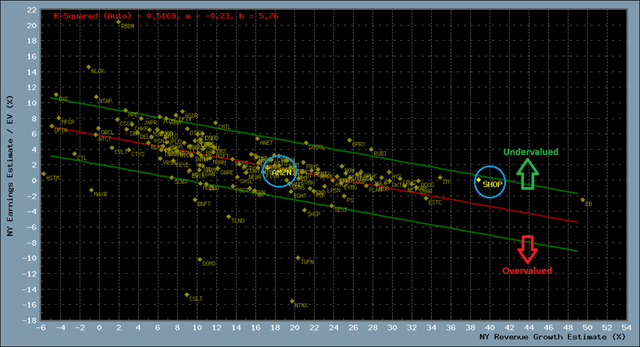 But I consider this a problem as Shopify isn't profitable, not now or for the foreseeable future, especially given the likelihood of a global recession. Keep in mind that Shopify primarily caters to small and mid-sized businesses, many of which are likely to go bankrupt in the near term, especially those small businesses that don't qualify for handouts.

Shopify is undoubtedly benefiting from the pandemic. Online activity is up and online purchases are likely up, at least for certain types of merchandise. But this is a short-term effect fueled by government-initiated lockdown combined with handouts. The result is an increase in web searches that may or may not result in an increase in purchasing.

But the government handouts won't go on forever and when the music stops, consumers will feel the effects. Spending will stop. Some will get their jobs back but not all. We should expect a recession, and this will ultimately eat into Shopify's transaction-based business model. In addition, many of those that have been laid off will start a small internet business and take advantage of the 90-day free trial. Most of these new business customers have no experience, putting pressure and increasing the cost of Shopify's infrastructure. There will be a significant churn from these newbies.

Shopify's valuation is extremely high, arguably the highest in my digital transformation stock universe, if you base valuation on gross profits. The stock price can only be justified based on the expectation of future earnings, which are unlikely for the foreseeable future. According to the CFO, 2020 is a year of heavy investment.

And oh yeah... some time ago, the management indicated that the fulfillment network would be "self-funded." Surprise! Apart from the $450 million spent on 6 River Systems, the company has announced that it will now be spending $1 billion on the fulfillment network. And this is only just the beginning. Wait until it actually figures out what it is doing.

I have been trading stocks, commodities, and options for more than 25 years. I have honed my skills in quantitative analysis and various stock investment tools for 15 years at Portfolio123 and offer services as a consultant in stock portfolios. I also own the financial data service Equity Analytx which provides aggregated fundamentals for a wide range of industries.