It's that time of the quarter, earnings season! Alphabet (NASDAQ:GOOG) (NASDAQ:GOOGL), a long-time holding of mine, got big tech underway on April 28th with reported GAAP EPS of $9.87 on revenues of $41.2B. The market's initial take sent the stock up over 7% in after-hours trading.

Before earnings, Alphabet was trading down roughly 7.8% YTD and was considerably off the $1532 high reached in February. The reasons for the drop were quite apparent. Lockdowns and general uncertainty resulting from COVID-19

An Earnings Deep Dive And Takeaways

First, the headline. Revenues were up 13% on a year-over-year basis (15% on a constant currency basis), and diluted EPS grew 3.8%. 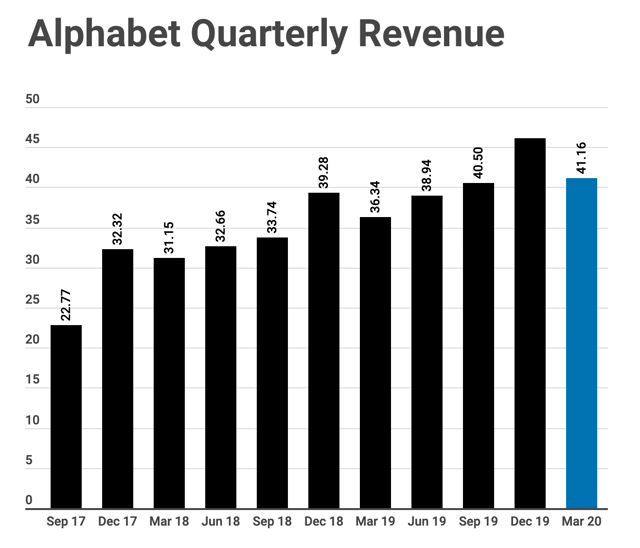 While we did see a 13% growth in revenues, it is worth pointing out that this is quite a bit lower than the 17% seen in the prior year. As expected, these tech behemoths cannot keep up their massive growth in perpetuity, so we are starting to see some things slow down a little. That and March was a bit rough for business.

Turning to ads, Alphabet's bread and butter. I expected we would see a little bit more of a slowdown than was reported, but it is worth noting that the quarter ended on March 31st, so we will likely see a year-over-year drop in Q2, and comments from Ruth Porat, CFO, all but confirm that:

Performance was strong during the first two months of the quarter, but then in March, we experienced a significant slowdown in ad revenues. 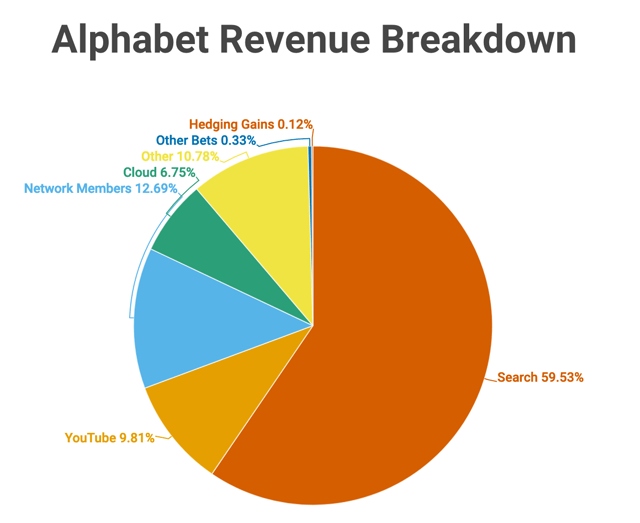 The Cloud business grew from $1.8B to $2.8B during the year. Substantial growth, yes, but there's still a ways to go until Google Cloud can genuinely consider itself a competitor to Amazon's (AMZN) AWS.

Finally, the balance sheet is still in great shape. Alphabet, like the rest of the big tech cohort, has significant liquidity. With $19.6B of cash on hand and more than $97B in marketable securities, Alphabet has more than enough liquidity on hand to see itself through a terrible ad market.

Both in the press release and on the call, CEO Sundar Pichai remarked that "People are relying on Google's services more than ever." This remark should not come as a shock to readers, as you have likely been locked up at home for the past two months like the rest of us.

While not work-related, Pichai did disclose some growth tidbits that I feel bear repeating here. These numbers, at least for me, put in perspective just how rapidly life has changed in the last 2-3 months.

March saw a significant rise in Search. This seems to be the consensus among many online ad providers. There's an excessive and growing amount of user eyeballs (supply), but we see little in the way of ad buyers (demand). As we begin to settle into a new normal, I feel this will slowly start to shift back, even before a full recovery.

App downloads via Android were up 30%. While Pichai did mention on the call that hardware activations had seen a decline, he also noted that Android app downloads were up 30%. With people having more time on their hands (literally), it seems that app developers see the benefit. While not discussed on the call, Google does take a 30% cut from the Play Store too.

YouTube saw significant increases, particularly in live streams. A week after turning 15-years old, YouTube continues to be the most dominant video streaming platform in the world. Again, no specifics were given on the call, but Pichai did note that YouTube viewership was up significantly. This, unfortunately, comes at a time when ad-demand is lower, but at least there is a counterbalance there.

Chromebook sales up 400% year-over-year. A 400% increase in anything is fantastic, and that's what Alphabet saw from Chromebooks. Most likely, this is a result of schools going remote and providing the cheapest option for students from home, but it's a positive for Google and its services. These users are now using Chrome and possibly Google's suite of services (Gmail, Docs).

Meet adds 3M users a day. This one was surprising for me, but Meet (formerly Hangouts) is seeing 3M new users daily and 100M daily participants in calls. It seems that Zoom (ZM) isn't the only company seeing a rise in the number of users to their platform. The big question will become, "who can convert these free users better?" My money is on Microsoft (MSFT) and Google as their suite of tools offer more bang for a user's buck.

We were told on the investor call that Search saw an "abrupt" decline in March, but "abrupt" was never truly defined. While we will have to wait until Q2 to figure out just how bad things are, I would like to look further out.

One day, a "new normal" will form. It could be that we spend more time at home. It could be that we return to a January type of life with additional precautions. Whatever it ends up being, businesses will be looking to sell, and the best place to reach customers, in many instances, is Google.

When a user heads to Google to search for a product, they're already a reasonably qualified lead. They have expressed interest in a product enough to look it up, so that particular searcher is already a prime sales target. This type of targeting cannot be achieved in newspapers, on TV, or in magazines, it can only happen online. When an advertising budget does return, I believe it goes to three places: Google, YouTube, and Facebook (FB).

Ruth Porat, on the call, mentioned that Q2 will be tough for Alphabet's ad business. I think investors should be prepared for that, and I believe that has already been priced in as we're still down more than 10% from the highs when factoring in post-market gains.

For now, Alphabet has the balance sheet to get the company through a low-demand headwind. Patient investors that hold at these levels can rest easy knowing that demand will eventually return.

The Hideaway scores are a basket of scores formulated by me. These scores reflect the quality, momentum, and price of a company. While I am not quite ready to demo the price score just yet, we can take a look at Alphabet's Quality and Momentum scores.

These scores help in narrowing down the investable market, and I have started documenting portfolios based upon the top-scoring firms. Please take a look at a recent post of mine for more information.

Alphabet is a $900B tech behemoth with control over one of the most used tools on the internet, Google Search. Alphabet also owns the single largest video streaming service in the world, YouTube.

With Google Cloud continuing to grow, and the potential of some of Alphabet's "Other Bets" (Waymo, for one), I believe the future for Alphabet continues to look bright. This company's significant reach, quality, and momentum offer investors security in uncertain markets over the long term.

Short term, volatility is definitely en vogue, but Alphabet is investing in long-term growth, and I will continue to be along for that ride.

Ash Anderson
2.18K Followers
I am a Software Engineer by trade and an avid market participant. Traditionally a long-only investor, I use home-grown software to find the best companies at the best prices. My investment philosophy is primarily high-quality firms. Firms that hold a significant advantage in their market, or demonstrate the ability to get to the peak. Software is my area of expertise, so my writing will frequently cover those in that sector. I also cover stocks that I consider to be high-quality, and investable that are outside the software world.Fans of video, please check out my YouTube channel where I also cover finance and stock research at youtube.com/ashanderson1

Disclosure: I am/we are long GOOGL, GOOG, MSFT. I wrote this article myself, and it expresses my own opinions. I am not receiving compensation for it (other than from Seeking Alpha). I have no business relationship with any company whose stock is mentioned in this article.