Energy (XLE) leads the broader US indexes (SPY, DIA, QQQ, IWM) higher in Wednesday trade, with the sector up nearly 5% on higher crude prices. That said, strong support is in tow from communications (XLC), tech (XLK), and financials (XLF).

Spot VIX is nearing the 30 handle as of Wednesday afternoon trade.

One should always bear in mind that when market action doesn't seem reasonable, markets may in fact have the correct answer. In this case, that means that perhaps the worst is actually behind us; that's not my read, but when the market disagrees with me, I like to at least consider what it would mean if the asset in question was right and I was wrong.

Right now, the chicken-and-egg setup creates potential for outsized moves - with momentum - in either direction. CL is up 30% today: up to almost $16/barrel as I publish this piece.

The headline on Investing.com highlighted above caught my interest. Should Gilead's (GILD) remdesivir drug prove to indeed be effective in treatment of the virus, that would augur well indeed for a global return to work and normal patterns. In turn, battered black gold could revive - even soar - to such a shift.

Many questions remain unanswered, but I want to highlight for readers the implications of how intertwined these markets have become. This creates positive momentum and strong favorable returns in the here and now, but the blade can just as easily slice the other way; naturally we have observed this in the recent past.

Thank you for the link, Alan. Sweden's more relaxed approach has earned the country mixed reviews.

Another reader responded to Alan's comment with a lengthy and insightful post in the prior MVB. I recommend taking a look. Here in southern Spain, people are just chomping at the bit to get back to some semblance of normalcy. Some pretty odd ideas, such as dividers at restaurant tables, are surfacing as a way of trying to get the country back on track as soon as reasonable.

We are swiftly moving into late spring, and attitudes may shift as the sun tarries longer in the sky. People are more apt to hole themselves up during the colder months anyhow, and so lockdown measures are an easier sell. Right or wrong, miracle cure or no, the next phase in the world's encounter with this pandemic is in the offing. My hope is that the Swedish approach turns out to win increasing empirical support. 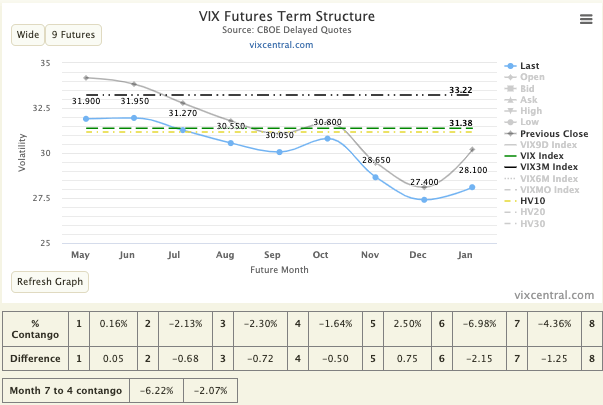 The gains of the last month have been gradual, as has the decline in the VX futures. That said, the shifts have often occurred in patchy fashion - little movement for several days followed by a marked decline. Such is the case in today's action for the VX futures curve.

Spot VIX still holds above the 30 line, just a touch above the ten-day realized volatility measure. It interests me that we are now observing spot VIX below the three-month volatility measure, which for several weeks rested markedly below the shorter-dated "classic" 30-day metric of S&P implied vol.

Above is a shot of the one-year history of the VIX of the VIX: "VVIX". At 115, on could argue that the measure has safely made it "home", after crashing above the 200-mark in mid March. Granted, 115 is on par with some rougher periods of the last year, such as the tumultuous period of August '19.

VVIX provides further support for a volatility market trying to get back to normal. It is tempting to think of volatility as nothing more than a high-beta alternative to just owning the S&P. Clearly there is high (negative) correlation, but the markets are by no means carbon copies of one another. This can be observed in both down and up markets.

Regardless of one's view as to how sustainable this environment is, metrics are pointing to a more peaceable set of scenarios... all this while risk assets rise handsomely in tandem!