Cabaletta Bio (NASDAQ:CABA) is pioneering the use of CAAR-T cell therapies to potentially cure various autoimmune diseases. The company was founded in 2017 to use clinically-validated CAR-T technologies to target B-cell mediated autoimmune disease. A primary feature of autoimmune disease is the loss of B-cell tolerance and the production of autoantibodies (i.e. they attack self). There are more than 80 autoimmune diseases from rheumatoid arthritis (RA) to multiple sclerosis (MS) to systemic lupus erythematosus (SLE). CAR-T is a technology to engineer T-cells to specifically kill cancer cells. CAR-T has several FDA approvals with multiple billion exits like Kite Pharma and Juno Therapeutics. Cabaletta is essentially repurposing this technology to target autoreactive B-cells instead of cancer cells. Whereas current medicines for autoimmunity kill human B-cells indiscriminately, Cabaletta’s products are engineered T-cells that target solely destructive B-cells.

The company was founded out of UPenn. The leadership team is composed of leaders in autoimmunity, CAR-T, and drug development. The scientific co-founders are Aimee Payne and Michael Milone. Payne brings expertise in B cell-mediated autoimmune diseases with Dr. Milone bringing the background in the design of CAR-T products whose work led to Kymriah (NVS), an approved CAR-T drug. The company’s CEO and President is Steven Nichtberger. He is an adjunct professor at the Wharton School at UPenn with a background from Merck and smaller biotechnology companies. Cabaletta’s EVP of Science and Technology is Gwendolyn Binder. She is the former CTO of Adaptimmune (ADAP) and was the director of translational research at UPenn.

The company went public in the fall 2019. Since then, the stock price is down over 50% from its peak. This decline is mainly due to the potential effects of COVID-19 on clinical trials. This provides an opportunistic buying opportunity in an early-stage company in the clinic bringing clinically-validated technology to a billion-dollar indication with early data later in 2020. 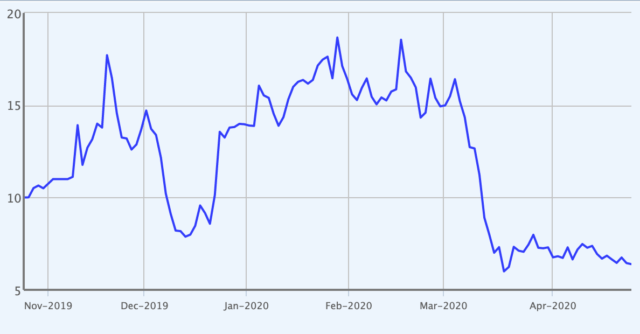 Cabaletta Bio platform is called Cabaletta Approach to selective B cell Ablation (CABA) to produce chimeric autoantibody receptor (CAAR) T-cells. Where chimeric antigen receptor (CAR) T-cells present an antibody to target a cancer cell, CAAR-T cells, present an antigen to target a B-cell. CAAR-T cells are created to specifically hone in and destroy a specific B-cell producing autoantibodies, which target self tissue destruction. This technology was invented at UPenn with Cabaletta securing the exclusive global licensing agreement along with multiple sponsored research agreements with the university.

Chimeric antigen receptor (CAR) T-cells have had several approvals over the last few years all in B-cell cancers. The approved products target CD19 with 2017 approval in acute lymphoblastic leukemia (ALL) and diffuse large B cell lymphoma (DLBCL). CARs have two major components, an extracellular target binding domain and an intracellular signaling domain. The extracellular end is composed of an antibody fragment that binds specifically to a target antigen on cancer cells. The intracellular end drives the stimulation of the T-cell once an antigen is bound; common intracellular domains are CD3 ζ, which initiates the release of cytotoxic agents and CD137, which enhances the replication and durability of the CAR-T cells.

Cabaletta repurposes CAR-T technology but focuses on autoreactive B-cells. Their ​chimeric autoantibody receptor (CAAR) technology displays the antigen on the extracellular domain instead of the antibody fragment. This enables for specific pathogenic B-cells to bind the antigen and be targeted by the CAAR-T cells. With the know-how of CD-19 CAR-T cells being developed at UPenn, Cabaletta benefits from the network to successfully translate CAAR-T cells. CAAR-T cells present the antigen that is being attacked in a B-cell mediated autoimmune disease. The antigen helps the CAAR-T cells to detect only disease-causing B cells and destroy them. The idea here is to not only cure an autoimmune disease but reduce serious side-effects that pain-killing B-cell medicines that currently approved autoimmune drugs have.

Cabaletta is using their CAAR-T technology to treat B cell-mediated autoimmune disease. In this class of disease, B-cells produce antibodies against normal tissues in error. This leads to T-cells and other effector cells coming in to kill normal cells. This leads to degradation of tissues. In autoimmunity, these B-cells are called autoreactive and produce autoantibodies.

So the company’s platform maps out the antigens that autoreactive B-cells recognize and match them to various autoimmune diseases. Considerations are the tissue specificity of the targets as well as the binding affinities and role in disease. The founders have deep expertise in a rare autoimmune disease called pemphigus vulgaris (PV). This is a main reason why Cabaletta is focusing on this disease for its lead asset.

Cabaletta is particularly focusing on mucosal pemphigus vulgaris (MPV) for its clinical program. The patient population is 1 per 100,000 people in the US with around 10,000 patients in total. However, crude immunosuppressive corticosteroids remain the standard-of-care for pemphigus vulgaris. Corticosteroids are used to downregulate multiple inflammatory pathways to tamper down the general activity of the immune system including both healthy and autoreactive B-cells. These drugs require chronic administration and often come with life-threatening side effects. Ideally, a drug for the disease would specifically eliminate pathogenic B-cells removing the requirement for chronic administration.

To gauge the market opportunity for Cabaletta, a comparable product is Kymriah, a CAR-T product for ALL from Novartis (NVS). The price tag for Kymriah is $475,000 with nearly half of patients getting complete responses. Using this anchor, Cabaletta could potentially earn well over a billion dollars for its CAAR-T product targeting DSG-3 for mPV. 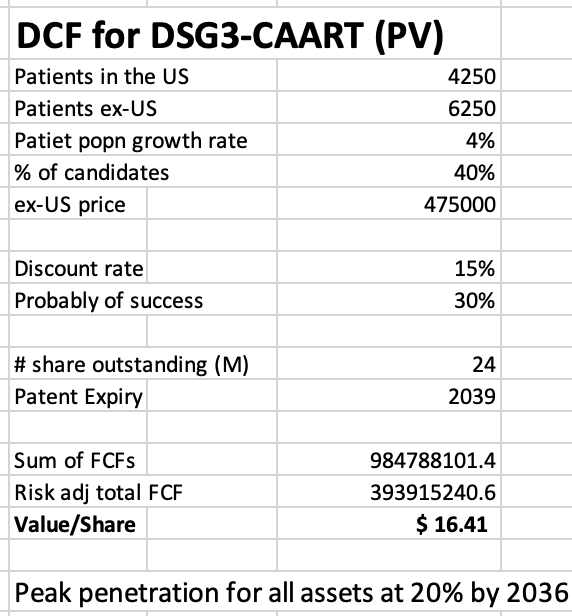 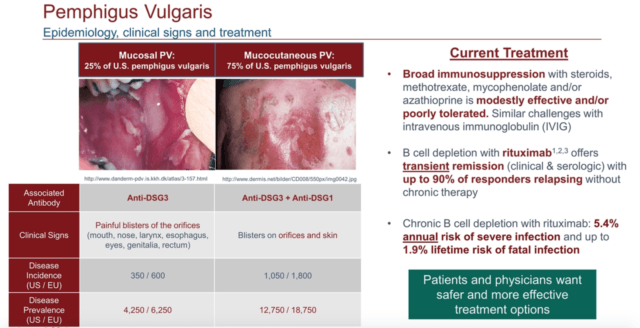 The company chose pemphigus vulgaris as the first disease to apply its CAAR-T technology to for a few reasons: 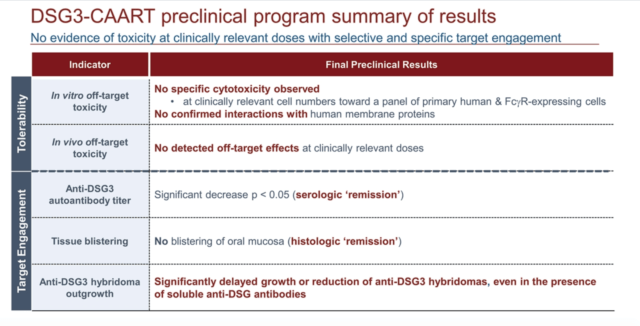 Cabaletta submitted an investigational new drug application (IND) to the FDA for mPV in August 2019. A month later, the IND was accepted and in February 2020, Cabaletta was given orphan designation. This has set up the company to bring its DSG3-CAAR-T product to Phase I trials in mPV this year. Moreover, the company is also bringing more products to treat muscle-specific kinase myasthenia gravis (MuSK MG), mucocutaneous PV, and hemophilia A with factor VIII (FVIII). Long term, the company can pursue partnerships to go after larger indications like lupus and MS, which require more capital to build out the cell therapy manufacturing capacity.

So far, Cabaletta has successfully completed pre-clinical studies for its lead program enabling the company to start a Phase I trial. The company has also shown the ability to manufacture qualified cells for a clinical trial and complete multiple manufacturing runs. Cabaletta has been able to contractually secure the processing capacity with UPenn and the Children’s Hospital of Philadelphia to successfully complete the Phase I study for DSG3-CAART along with sufficient commercial-grade vector supply for the medicine for the next 2-3 years. In cell and gene therapies, often the manufacturing process is the product.

In 2020, the company has several potential clinical catalysts that can drive the stock price upward. The first is Phase 1 safety data from the first cohort for DSG3-CAART in PV by the end of 2020. This has been delayed due to COVID-19. All companies initiating new trials are facing issues recruiting patients as hospitals have been focused on responding to the pandemic. Once this subsides, Cabaletta is well-positioned to dose its first patients.

The key read-out for the Phase I trial is acute tolerability (over 8 days) for the initial patient cohort. The second are IND-enabling studies for MuSK-CAART targeting the MuSK form of myasthenia gravis. The key experiment is presenting in vivo target engagement data. The last potential catalyst is validation of cell processing for clinical trials with a contract manufacturing (CMO) partner for its products. Right now, Cabaletta is working with universities for manufacturing.

Cabaletta has a few potential risks around the Phase I trial for DSG3-CAART and manufacturing. Patient recruitment for the company’s Phase I trial has been delayed and could push out data for the initial patient cohort until early 2021. This is a major challenge for all early-stage biotechnology companies. This risk just extends timelines for Cabaletta’s human trial and everyone else’s. With $130M in cash at the end of 2019 and at least 2 years of runway, Cabaletta is structured to survive this pandemic and translate CAAR-T technologies into human medicines.

The second key risk is manufacturing. All cell and gene therapies face issues with making their products at a high enough scale to meet demand. Cabaletta has ongoing conversations with CMOs like Brammer Bio (TMO) and Oxford BioMedica (OTCPK:OXBDF) to scale up vector and cell production. In the long run, Cabaletta will need to invest to build out its own manufacturing capability. Cabaletta is using the UPenn processes that produce CD19 CAR-T cells to manufacture its own CAAR-T cells - the process starts with production of vectors with collection/activation of T-cells followed by transduction of the vectors into T-cells to produce CAAR-T cells and expansion/washing to be dosed into a human. This approach has been successfully used for Kymriah’s approval and mitigates manufacturing risks for Cabaletta’s first clinical product.

Ultimately, Cabaletta has an experienced leadership team with experience in shepherding cell therapies through the clinic. The key thesis for investment in Cabaletta is centered around its potential to cure several autoimmune diseases. This is anchored on the clinical results of a similar technology, CAR-T, in oncology. With autoimmunity having a market size of at least $100B but only having standard-of-care medicines like steroids that lead to nasty side effects and Humira (ABBV), which lacks specificity for pathogenic B-cells, there is a massive opportunity for Cabaletta to be one of the first companies in autoimmunity to actually offer potential cures.

Humira is actually the best-selling drug in the world with revenue of over $20B. Even though cancer gets a lot of attention, autoimmunity is just as an important problem for companies to work on. Similar to how companies like Juno and Kite translated CAR-T technology to massively improve the standard-of-care for patients with certain blood cancers, Cabaletta is doing the same for PV and other autoimmune diseases. Once Juno and Kite showed successful safety and efficacy data in humans, their valuations increased massively because they showed the ability to cure blood cancer patients. As Cabaletta progresses through the clinic with mPV patients, something comparable is likely to play out.

The scientific basis of using CAAR-T to target DSG-3 mPV is sound with the company having the world-leading experts in the target, disease, and modality on board. The preclinical data suggests that DSG3-CAART will have significant target engagement and tolerability. With a margin of safety of its lead asset already past IND, Cabaletta is a compelling investment that can potentially cure mPV and use its first-mover advantage to bring CAAR-T drugs to more autoimmune diseases and partner its platform with larger biopharma companies in the future.

The thesis for Cabaletta is premised on the following:

Disclosure: I am/we are long CABA. I wrote this article myself, and it expresses my own opinions. I am not receiving compensation for it (other than from Seeking Alpha). I have no business relationship with any company whose stock is mentioned in this article.

Additional disclosure: Numenor has no commercial interest in Cabaletta Bio.