Despite all the challenges, Apple (NASDAQ:AAPL) managed to deliver a solid all-around beat for fiscal 2Q20. Revenues of $58.3 billion increased minimally YOY, when consensus estimates pointed at a rather sharp 6% contraction. EPS of $2.55 also impressed, topping consensus by nearly 30 cents. I estimate, however, that below-the-op line items (e.g. a more favorable tax rate) accounted for about one-fourth of the earnings surprise.

At least so far in 2020, Apple has been managing the COVID-related issues well. This is not to say, however, that the third fiscal quarter, traditionally a slower period for device sales, will be a walk in the park for the Cupertino-based company. 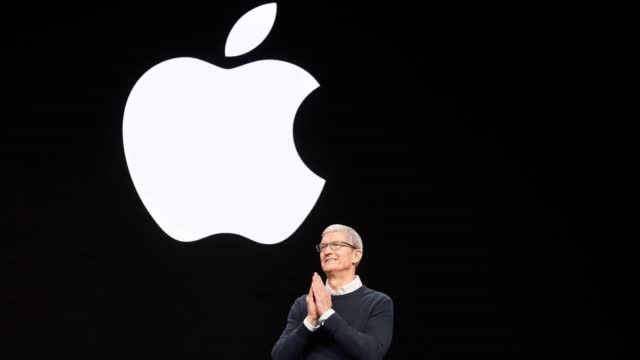 A quick glance at the results

In my earnings preview, I listed the three items of discussion that I considered most important: (1) iPhone sales dynamics, (2) the impact of the crisis on service revenues, and (3) capital allocation plans.

On the first item above, the smartphone business certainly did not do much to boost financial performance. Sure, sales topped expectations by an inch. But the nearly 7% YOY decline suggests that supply chain disruptions, store closures, and a decline in demand for high-priced devices during times of economic distress served as meaningful headwinds.

The better news is that the management team reported a healthy channel inventory exiting the quarter. Also, production and the supply chain seem to have returned to normal, while the reopening of global economies should support Apple store sales going forward - especially in Greater China, where revenues dropped 7.5% YOY. The new iPhone SE has been reported to have strong demand, although April numbers were (unsurprisingly) not provided.

On the second topic of discussion, I was pleasantly surprised to see service revenues climb almost undisturbed. The 17% growth rate was very much in line with last quarter's metric, despite the segment having gained quite a bit of scale over the past few years. Apple is well ahead of its plan of doubling 2016 service revenues by 2020 (see chart below), with paid subscriptions up over 100 million YOY to more than half a billion today. This bodes very well for my investment thesis, which leans heavily on the business transition from one-off device sales to a more stable, often recurring-revenue model.

Lastly, Apple's balance sheet remained healthy, to say the least. Cash flow from operations for the quarter was $2.2 billion higher YOY (up nearly 20%) despite all the challenges, which I find impressive. As a result, Apple maintained its capital allocation plans, increasing dividend payments by 6%. The company also announced $50 billion in extra share repurchases when most other companies have been halting their buyback efforts. This number, however, may have been a bit lower than what some analysts were expecting. 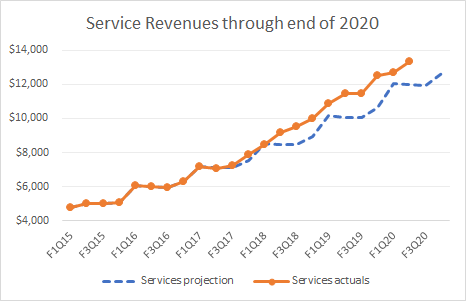 No change to the investment thesis

Apple was unable to dodge the COVID-19 bullet in the second fiscal quarter, but analysts and investors certainly did not expect them to. The two percentage point pressure to share price in after-hours trading was probably better reflective of profit-taking moves (the stock had been up about 20% for the month) and less indicative of unforeseen troubles ahead.

In the end, I believe that lack of substantially negative news on earnings day can be considered good news. Apple appears to be well positioned to weather the current health and economic crisis (e.g. strong balance sheet, solid cash flow), but also to rebound once the macro-level forces are more favorable.

I use an approach that favors predictability of financial results and broad diversification when choosing stocks for my All-Equities Storm-Resistant Growth portfolio. So far, the small $229/year investment to become a member of the SRG community has lavishly paid off, as the chart below suggests. I invite you to click here and take advantage of the 14-day free trial today.

66 Comments
To ensure this doesn’t happen in the future, please enable Javascript and cookies in your browser.
Is this happening to you frequently? Please report it on our feedback forum.
If you have an ad-blocker enabled you may be blocked from proceeding. Please disable your ad-blocker and refresh.