As the equity markets rally from the March 24th bottom gains steam, the VIX volatility index has more than halved since its all-time high on March 16th. VIX hit the 80 level for the first time during the financial crisis. Unlike a decade ago, it only took a month for the VIX to drop below 40 from the peak. Not only was the absolute level of VIX in March unprecedented but also the velocity of VIX change was unparalleled in the history of the index. Even though the equity market has rebounded over 30% since the March low, a 30-handle VIX is likely to stay as long as the large daily swings remain.

Usually, when we discuss the VIX, we refer to the 1-month volatility index provided by CBOE. However, there are multiple VIXs: 9-day, 1-month, 3-month, and 6-month VIXs are all available on CBOE's website. Not surprisingly, all of the indices made all-time highs in March. Particularly, the 9-day VIX topped the 100 level for the first time. The 1-month VIX is the most commonly used one because it was launched much earlier than the others. We have written about the 1-month VIX becoming a victim of Goodhart's law in the past. What about the other VIX indices? We will explore them today, comparing each to its corresponding realized volatility. 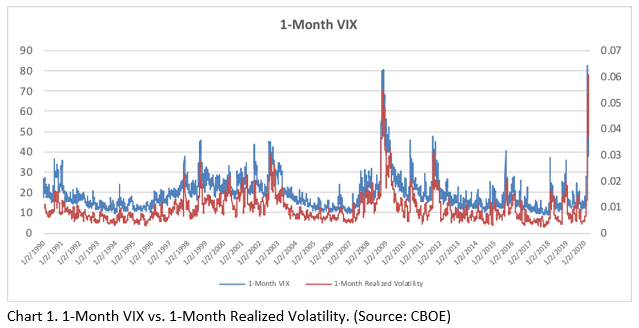 Similarly, we find the 9-day VIX to be a contemporary index rather than a leading one, as demonstrated in Chart 2 below. 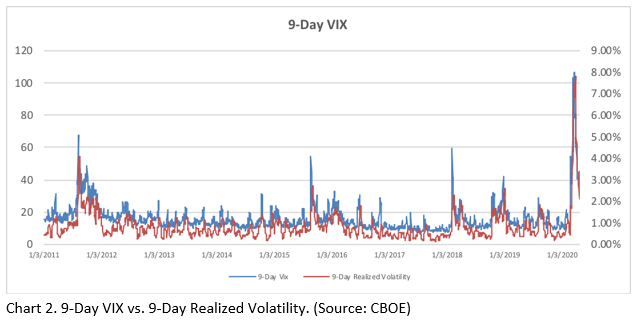 Short-term price tends to include noise from investor sentiment, which can be why the short-term VIXs are mimicking realized volatilities so closely. What about the long-term ones? Interestingly, the 3-month and 6-month VIXs have not been subject to the Goodhart's law yet. As Charts 3 and 4 reveal, the longer the VIX term, the more pronounced its indicating power. Nevertheless, we would like to caution investors that this may not be a leading indicator for a long-term VIX trading strategy, because the lag in realized volatility is likely caused by the prior short-term volatility. In other words, it takes more time for the long-term realized volatility to rise (or fall) than it does for the short term. 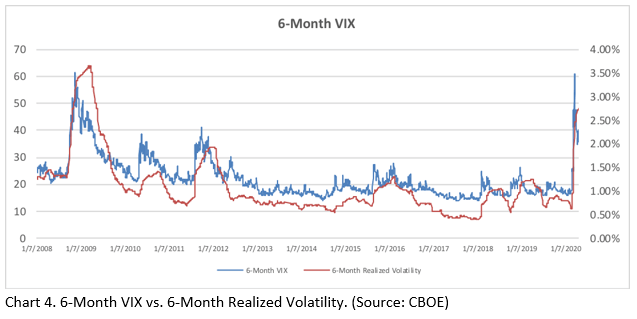 Last but not least, the correlation between the volatility index and the realized volatility is the highest for the 3-month VIX, roughly 90.82%. If we want to tick out as much noise as possible when it comes to VIX, maybe we should look at the 3-month term instead of the popular 1-month term.

David Kotok
2.04K Followers
David Kotok co-founded Cumberland Advisors in 1973 and has been its Chief Investment Officer since inception. David’s articles and financial market commentaries have appeared in The New York Times, The Wall Street Journal, Barron’s, and other publications. He is a frequent contributor to Bloomberg TV and Bloomberg Radio, Yahoo Finance TV, and other media. He has authored or co-authored four books, including the second edition of From Bear to Bull with ETFs and Adventures in Muniland. He holds a B.S. in economics from The Wharton School of the University of Pennsylvania, an M.S. in organizational dynamics from The School of Arts and Sciences at the University of Pennsylvania, and an M.A. in philosophy from the University of Pennsylvania.David has served as Program Chairman and currently serves as a Director of the Global Interdependence Center (GIC), www.interdependence.org, whose mission is to encourage the expansion of global dialogue and free trade in order to improve cooperation and understanding among nation states, with the goal of reducing international conflicts and improving worldwide living standards. David chaired its Central Banking Series and organized a five-continent dialogue held in Cape Town, Hong Kong, Hanoi, Milan, Paris, Philadelphia, Prague, Rome, Santiago, Shanghai, Singapore, Tallinn, and Zambia (Livingstone). He has received the Global Citizen Award from GIC for his efforts. David is a member of the National Business Economics Issues Council (NBEIC), the National Association for Business Economics (NABE), has served on the Research Advisory Board of BCA Research and is currently on the advisory board of RiskBridge Advisors. He has also served as a Commissioner of the Delaware River Port Authority (DRPA) and on the Treasury Transition Teams for New Jersey Governors Kean and Whitman. Additionally, he has served as a board member of the New Jersey Economic Development Authority and as Chairman of the New Jersey Casino Reinvestment Development Authority.
Follow
4 Comments
To ensure this doesn’t happen in the future, please enable Javascript and cookies in your browser.
Is this happening to you frequently? Please report it on our feedback forum.
If you have an ad-blocker enabled you may be blocked from proceeding. Please disable your ad-blocker and refresh.