European Markets (VGK, EWG, EWU, EWQ) are for the most part not doing so hot today, allegedly due to Sino-US relations; plausible, but of course millions of investors rarely (and more likely, never) act in unison on the same impulse.

We'll look at the S&P (SPY) just below: US stocks (DIA, IWM) are also mostly adding to Friday's steep drop, though the NASDAQ 100 (QQQ) has managed to buck the trend and is showing modest gains this Monday morning.

WTI is back above $20/barrel - more than $50 above the low of the May contract just before its expiration!

Spot VIX stands at about 39 as I pen this.

<Your> Thoughts on Volatility

I'm going to take a different tact today and devote this section to reader comments from the prior MVB.

1winner brings up an example of a giant company that we're all familiar with (AAPL), whose revenue growth doesn't so much line up with share value.

My own vote on the matter is that we're at the early innings of the bear market. Fiscal and monetary policy have acted vigorously, to be sure, but there is high risk that the market will run out of patience if the economy doesn't supply a firm and rapid rebound.

Here's the other side of the story. I like MITM's point that it hasn't been 'that' long. For many of us, the lockdown and economic drawdown seems to have been going on for time immemorial. But if we can get folks back to work and regular life without threatening their well-being, then perhaps the economy can dust itself off and get right back on the horse.

My belief is that in order for this eventuality to play out, firms are going to need to offer some pretty attractive bargains to get customers back through the door. I think we may see an initial mad dash of spending as a way of celebrating our newfound freedom, followed soon thereafter by penny pinching on the part of the consumer due to drawn down savings, job insecurity, etc.

Thank you, MM. Regardless of any particular reader's viewpoint on President Trump, it is difficult to deny that for much of 2018 and 2019, the administration's stance on foreign policy tended to be volatility-inducing events for risk assets.

Here, though, we have already heightened vol levels coupled with frayed nerves and the potential that we are coming off a monster bear market rally. Add in the mechanics of negative gamma, and there may be a sudden rash of "panic" (not really) selling that cranks volatility up to higher levels once more.

Let's talk about the here and now though. April was a positively heroic market for stocks; since then we've seen some bleed-off from what may be at the minimum considered an overbought market situation.

I am not arguing as to whether or to what degree the run-up was rational and based on an improving vision of what the actual risks to the economy still are.

But for those with a bullish stance, mornings such as today should offer succor: shares dropped a decent bit (more than 1% in the pre-market), and have since managed a partial rebound. Let's not overstate the importance of such a blip, but it is after all better market that transitions from bad to worse. 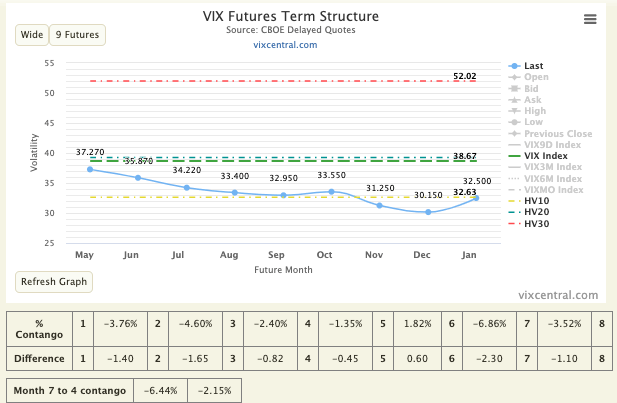 Spot VIX is floating very near the 20-day vol measure, and for that matter pretty close to where the metric spent much of April.

Note the 20 vol-point gap between HV10 and HV30. I find it noteworthy that we have to head out to the November contract before we reach a time where the VX futures is below the HV10.

This provides some evidence to my mind as to just how stubborn the back end of the curve will be if indeed the economic situation normalizes and the stock market attempts a bona fide recovery on a calmer investing environment.