In 2016, General Mills (NYSE:GIS) quit being everybody's darling due to weak growth and high debt and the dividend freeze after years of growth. But after the COVID-19 volatility erupted, something interesting happened. The shares have moved surprisingly successfully through COVID-19 and have outperformed the stock. It seems that the lockdown and economic turmoil cannot harm General Mills market.

Fundamentally, the company also appears to be relatively favorable, based on the P/E ratio of the last ten years and current expectations. If it manages to reduce its debt further successfully, it can serve as an anchor company in any well-diversified retirement portfolio.

Price stability as a good sign and its meaning

If you had to sort the following companies according to their relative strength to the broader market, where would General Mills stand?

All four companies survived the COVID 19 crisis with extremely stable prices, while the S&P 500 and the Dow Jones are currently still well over 10 percent off their highs. And if you think General Mills is presently somewhere in no man's land, you're wrong. General Mills has outperformed all these companies. Not only have investors not suffered any losses in the COVID-19 volatility, but the shares are also 10 percent up (excluding dividends). At the time I am writing this article, General Mills has done even better than Amazon.

Of course, investors should not overestimate such considerations because General Mills has underperformed in recent years. This is especially true when compared to Amazon and Microsoft.

Nevertheless, the market has something to say to investors here. It seems that the market is not so critical of the debt problem and slow growth. In these times, other aspects seem to count. A stable business, a good infrastructure, and management that acts prudently, and for the long term. It appears that the market sees General Mills as such a stable company.

What is particularly interesting here is that General Mills is not necessarily a company that profits, particularly from hoarding purchases. It does not offer toilet paper or disinfectant. Nevertheless, individual business units saw increased demand, and that may offset losses of other business units. China can serve as a good blueprint, as General Mills was able to see how the virus and the lockdown affect business there. And indeed, Haagen-Dazs, in particular, has suffered particularly from the governmental measures. This is what management said during the earnings call in February:

COVID-19 has impacted our business in recent weeks and what we expect to see in the coming months. As we mentioned last month at CAGNY, nearly half of our Haagen-Dazs shops in Greater China had been temporarily closed. In total, we saw a 90% decline in traffic in shops and substantial declines in other foodservice outlets in China in February, resulting in a significant reduction in Haagen-Dazs sales in Asia for the month.

However, the following overview shows that General Mills has benefited from the actions in reverse.

I will come back to the guidance later, but according to the official statements of the management, General Mills seems to go through the COVID-19 crisis relatively well. This, of course, explains why the market is shifting money towards such companies. Does this also justify long-term investments? Let us take a look at other fundamental data.

Overall, we have a market cap of USD 36 billion and total liabilities of almost USD 22 billion.

In the first three quarters, General Mills had an FCF of USD 1.9 billion, an increase of 14 percent compared to last year. Management used half of that (USD 862) million to reduce debt.

With a debt ratio of 59 percent, the company is still too heavily indebted, but it is making progress. The company also benefits from low interest rates. According to the management, "net interest expense decreased USD 21 million, driven by lower average debt balances and lower rates". General Mills will continue to benefit from this in the coming quarters. This has also enabled the company to reduce the trend of ever-increasing interest expenditure. 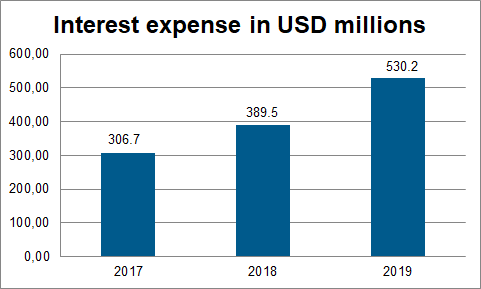 Currently, the company seems to be traded below its fair value P/E ratio. With a reasonable value P/E ratio of 19 based on the 10 Year P/E ratio, the stock price should be around USD 66. With an actual price of about USD 60, this indicates an upside potential of 10 percent. 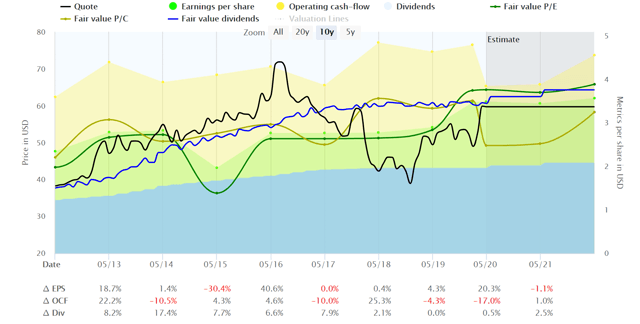 Furthermore, the company would have to meet expectations and achieve EPS of USD 3.49. This could even be realistic.

To this extent, the company even raised its guidance in February.

However, General Mills will benefit from additional time here:

We expect Q4 organic net sales growth to step up significantly, driven by improved performance in North America Retail, as well as an extra month of results in Pet as we align that business to our fiscal year-end. Q4 reported net sales will benefit from a 53rd week in May. This accelerated net sales growth will drive a strong increase in gross profit dollars in the quarter, which will be partially offset by a significant increase in growth investments in brand building and capabilities.

Nevertheless, investors should bear in mind that the old price-earnings ratio on which our fair value calculation is based must be put into perspective, as the high level of debt justifies a discount. I would, therefore, say that the company is currently fairly valued.

General Mills could become an investor's darling again. As one company after another withdrew its guidance, General Mills raised it in February. We will see this month when the results for 2020 are announced, whether this will still be valid.

Besides, the company is benefiting from low interest rates and (as of now) can service its debts as planned. If the Pet All-channel continues to grow as it has done so far (most recently by more than 30 percent), it could give the company a further boost. Investors also benefit from a dividend yield of more than 3 percent and a very healthy payout ratio of approximately 56 percent.

General Mills is part of my diversified retirement portfolio. If you enjoyed this article and wish to receive other long-term investment proposals or updates on my latest portfolio research, click "Follow" next to my name at the top of this article.

The European View
12.97K Followers
Runner of the TEV Blog | Lawyer For Competition Law And Antitrust | Private InvestorI am a long-term oriented investor and in my early thirties. I hold a law degree and a doctor in law and love investing and talking about my and others' investments. I regularly write about my research and investments on various investor platforms and on the TEV Blog. Living and working in Europe in an international law firm as a lawyer for antitrust & competition, I may have another view on American companies, especially when it comes to the reputation of a company or possible alternatives here in Europe. Hence, I try to build a diversified portfolio not only with American blue chips but also with smaller and maybe hidden European Champions. Given that, I am very sensitive and close to the political and economic fundamental environment in Europe. My readers benefit from this. When it was foreseeable that Qualcomm would be fined by the European Commission, I calculated the exact amount in advance and was able to inform my readers about it. The same applies to the European Commission's first interim measures against Broadcom, which were the first in two decades. Furthermore, I was the first analyst (to my best knowledge), who predicted without any doubts a dividend cut by Deutsche Telekom. **My articles represent my opinion only and in no way constitute professional investment advice. It is the responsibility of the reader to conduct their due diligence and seek investment advice from a licensed professional before making any investment decisions.**

Disclosure: I am/we are long GIS. I wrote this article myself, and it expresses my own opinions. I am not receiving compensation for it (other than from Seeking Alpha). I have no business relationship with any company whose stock is mentioned in this article.