I anticipate a downward shift across the oil forward curve, meaning lower oil prices across the entire curve.

I expect the short-end future prices to decline at a faster rate than the long end as storage capacity constraints re-remerge. This would steepen the curve and increase contango.

The chances of a V-shaped recovery in the global economy and oil demand over the next 12 months are minimal.

Undervalued oil tanker companies as storage and contango trade plays are the best way to invest in this idea.

I will start with a simple statement. If you are not willing to take delivery, you should not be long oil futures right now, because storage constraints are what it is all about. Oil futures prices went negative last month because people realized this, and it is still as much of a problem as ever. South Korea and India have reached storage capacity. Goldman Sachs predicts the United States is next here within weeks, which means we have yet to see the worst from an oversupply perspective. The image below is the current Cushing, Oklahoma storage stocks, with the black dotted line showing capacity. 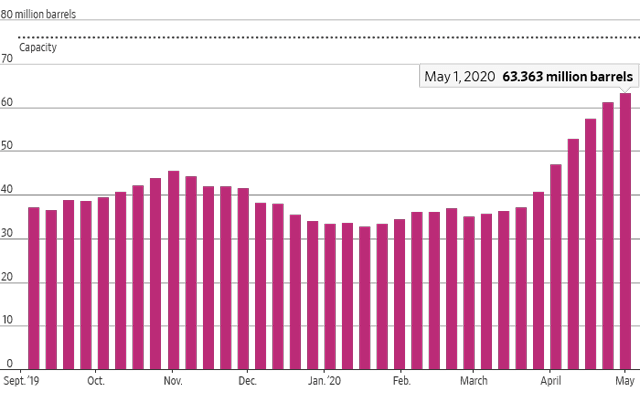 (Image courtesy of WSJ and EIA)

Oil longs are getting excited that the EIA is reporting 5-8 million barrel crude builds rather than 10 million. These are still huge inventory builds and are on pace to test capacity storage limits. Below is a chart from the WSJ showing the largest US commercial crude inventory builds in history.

According the Journal, a fleet of oil tankers carrying 40 million barrels of Saudi oil is due to arrive in the U.S. golf coast in mid- to late May. This is "about seven times as much as the US gulf took from the country in a typical month last year". This oil was pumped pre-output cuts, which means the Saudi-Russia price war oil is still making its way around the world and the cuts will take time to take effect on supply. Even if oil demand has bottomed, it would more likely stabilize at a low level rather than vault back up to 2019 levels.

The same can be said about corporate earnings, as Jim Chanos has pointed out to the stock longs. The common argument is six months from now the economic and business environment will be better, and the stock market is forward-looking, therefore rising equity and risk asset prices make sense. The problem with that is it assumes, for one, that it will be better six months from now, and second, it also assumes the full extent of the downturn has already been priced in. I believe risk assets are still highly overvalued.

The United States has likely lost more jobs in a month than throughout the entire financial crisis. We will see in tomorrow's employment report, but throughout '08 and '09, approximately 8.6 million jobs were lost. The United States has probably lost more than that in April 2020 alone, which is staggering. Maybe the COVID-19 panic-selling has subsided somewhat, but the negative economic impacts are yet to be fully reflected in securities prices. According to Federal Reserve officials Neel Kashkari and Mary Daly, the chances of a V-shaped recovery for the economy are minimal, and Daly said no one she is speaking with is expecting that.

Regarding oil prices, as stated in the summary, I am expecting a downward shift of the entire curve as economic optimism wanes with the short end of the forward curve falling at a faster rate than the long end. Short-end futures may very well return to negative territory as storage constraints emerge, while the longer end declines as well to a smaller degree. This, in effect, steepens the curve and increases contango, which is the difference between long-end and short-end forward prices.

I believe oil tanker companies are one of the select industries set to profit and excel in this environment. Oil storage assets are highly valuable if oil remains oversupplied and the contango in futures increases, which incentivizes traders to buy now and store for future sale. This combination drove up tanker rates to extremely high levels in March and April 2020. VLCC rates rocketed to upwards of 200k per day, which is extremely high by historical standards and rivals the circa '05-'08 tanker boom days. Tanker companies have started reported earnings and the results are very good, but the guidance is even better, as the sky-high rates will mostly be earned in the upcoming quarter. DHT reported in Q1 2020 VLCC's operating in the spot market achieved an average rate of $66,400 per day, and thus far in Q2, the average rate is approximately $110,000 per day. 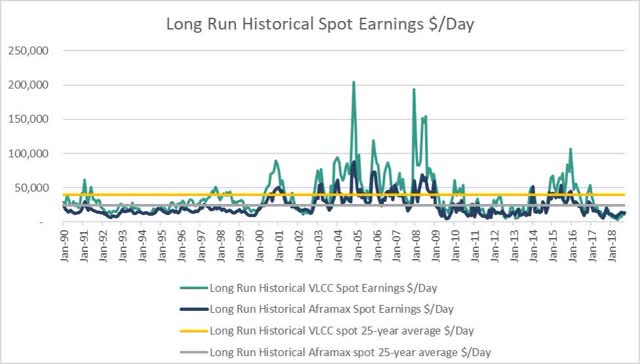 Last year at this time, VLCC rates were around $30,000 per day. Interestingly enough, many tanker stock prices have barely moved despite the huge upward shift in earnings. For example, Frontline (FRO) is currently valued by the market less than it was a year ago, at $7.70 per share rather than $7.82. It seems the market is either inefficiently pricing these companies or doubting the sustainability of current earnings. For reasons above, I see little reason tankers cannot continue to profit substantially and excel over the intermediate term. There are headlines that tanker rates are "down over 50%", but that is very misleading, as they have only come down from the sky-high levels (that will be reflected in Q2 earnings) and are still above historical averages. Unless VLCC rates crash down to $20,000 or $30,000 a day in the near term, these companies share prices can rise substantially.

As far as FX goes, I am synthetically long the US dollar and short treasuries at the same time through short gold mining/streaming positions. I have covered the foreign exchange aspect extensively in the article here. The most important point is as follows:

Even if the Fed prints 4.7 trillion thereby doubling its balance sheet, according to the Bank of International Settlements, there is approximately 13 trillion of foreign USD denominated debt which means it's not even a question whether emerging market corporations can pay their debt. It's more of a question of if they can even acquire the USDs necessary. This doubling of the Fed's balance sheet is also largely going to be used by the US banking system and providing relief to the US economy, not foreign central banks and corporations.

I would also like to take this opportunity to alert the treasury bulls that the United States government is issuing $3 trillion in new debt in this quarter alone, which is more than double the total issuance in 2019. This huge supply of treasuries should put downward pressure on prices and upward pressure on yields. I continue to believe a strong USD and higher real (inflation-expectation adjusted) treasury yields will be a headwind to oil prices from that perspective as well.

I am quite confident in my vision for the oil forward curve over the course of this year, and I will once again re-state it. The most bullish scenario for tanker companies is a continued oversupply of oil as reflected in a downward shift across the entire oil curve, with the short end declining at a faster rate (and potentially going negative) than the long end as a result of storage capacity concerns. I expect this exact thing to happen, and will gladly and confidently be long tanker companies, especially given their historically low valuation relative to earnings and tanker rates. Optimism and pessimism come and go from day to day - but in the end, the economic reality of the situation will win out.

Disclosure: I am/we are long DHT, FRO, TNP, TNK, NAT, STNG. I wrote this article myself, and it expresses my own opinions. I am not receiving compensation for it. I have no business relationship with any company whose stock is mentioned in this article.

Follow Michael Roat and get email alerts
+
Add a comment
Disagree with this article? Submit your own.
To report a factual error in this article, click here.
Your feedback matters to us!