Solaris Is Still On A Sloppy Ground

The steep fall in hydraulic fracturing and completions activities will set Solaris Oilfield Infrastructure's (NYSE:SOI) proppant and chemical systems performance tumbling in Q2. Its proppant management system fleet utilization can significantly suffer, while there will no demand for chemical management systems in Q2, leading to a drop in the top-line and profitability. In the current scenario, only the small-pack silos are gaining market share. I think there are enough headwinds to press the stock price downward in the short-term.

SOI is integrating various technologies with the well site rental equipment as well as slashing operating costs to reduce its overall cost structure. It will also reduce capex significantly in FY2020 to improve free cash flow. With no debt and sufficient liquidity, it is more likely to survive a market shake-out and take advantage of the fracking activity recovery in the medium-term.

How Will SOI Deliver Value In A Tight Market? 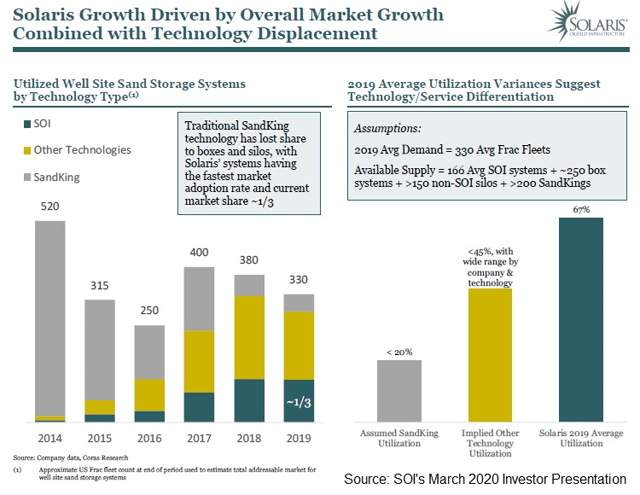 In 2020 so far, the energy prices have plunged, causing many operators to continue to slow completion activity. SOI's management expects to see the U.S. onshore completion activities to decline by ~80% in Q2 from Q1 levels. To counter the market loss, the company will continue to offer innovative products that improve data and automating processes by redesigning its proppant and chemical management systems and removing workforce requirements at the well sites. It will focus on keeping the environmental and socially conscious perspective. As efficiency improves, we see that continued throughput daily of sand leads to the question of wellsite safety.

In general, SOI's mobile equipment drives supply chain efficiencies in the completions market. The company offers its services is the primary U.S. Basins. Higher usage of its proppant delivery services can help the producers to lower prices through cost reductions. As the company binds its ties with the dedicated partners, the overall rental rates witnessed a decline in Q1. The management concedes that the pricing may deteriorate in Q2, but it plans to stick to its policy in the coming quarters despite the challenges. For a more detailed analysis of how its offerings are benefiting the customers, read my previous article here.

SOI's vertical silos have proved to be highly efficient for the original systems manufacturers and pressure pumping companies in the small pads. A Basin-level analysis of the company's performance shows that in the North East, the company underperformed in recent times due to the well site movements. So, the company is offering the smaller packs (three-packs) instead of the usual six-and-higher-range packs, which may not be cost-efficient. Also, due to the change in demand pattern, the company is repositioning its offerings in Haynesville and Marcellus. However, under the current circumstances, the company will continue with this strategy to hold on to the market share, even at the cost of margin. 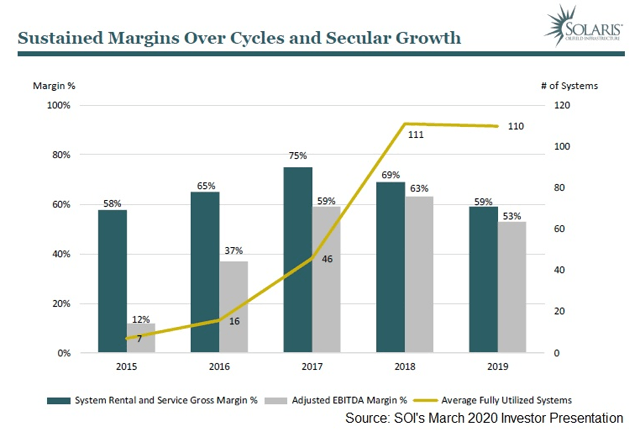 Like many other oilfield services companies, SOI, too, will reduce costs and improve liquidity to manage the downturn. It is currently working toward reducing headcount, lowering salaries, negotiating with suppliers and vendors, and reducing capital spending. It has recently reduced headcount by more than 50%. From December 2018 until Q1 2020, SOI returned $59 million in cash to shareholders via dividend and share repurchases. As of March 31, 2020, it completed its share repurchase program and has not repurchase plans. With the available cash and a debt-free balance sheet, lower costs will further boost the company's prospect of weathering the current energy market crisis.

In line with the upstream operators' capex reduction and a significant reduction in energy demand and prices, SOI's management expects the fully utilized U.S. frac crew count to decline between 75% and 85% in Q2 compared to Q1. During Q1, the company's fully utilized number of proppant fleets in the system was 83, which was 6% lower than a quarter ago. The company will look to lower operating costs by 50% in Q2, primarily through a steep cut in workforce spending. Based on the trend, it is likely that the frac activity fall will surpass the gains from its cost reduction initiatives, resulting in a lower margin in Q2. So, the company's EBITDA, which fell by 51% quarter-over-quarter, can remain flat or may decline further in Q2. 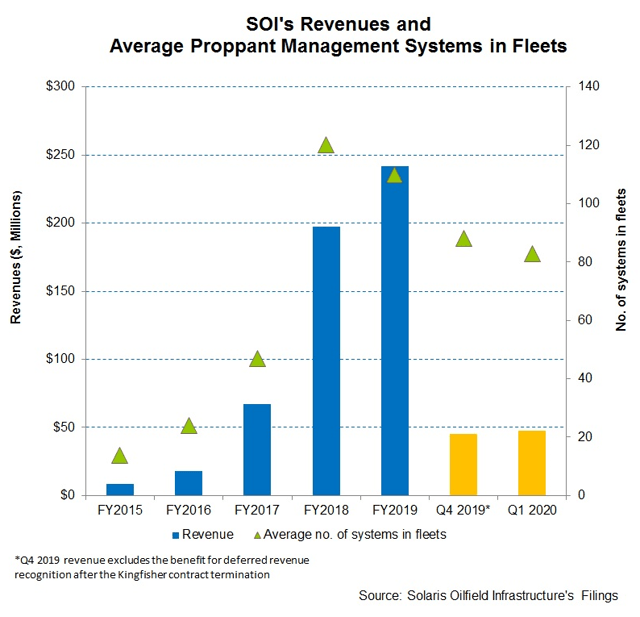 In Q1 2020, Solaris Oilfield Infrastructure's total revenues increased by 5.7% compared to Q4 2019. Much of the revenue growth came from an increase in last-mile services. The last-mile services constitute a significant trucking component at pass-through margins. However, during Q1, the average mobile proppant management systems (fully utilized) in the fleet decreased by ~6%.

As the completion activity slowdown continued in many unconventional resource Basins following the crude oil price volatility, the company has been readjusting its fleet count downwards for the past couple of quarters. As a result of the lower volume, the company saw lower cost absorption, which led to a 12% lower gross profit in Q1. Lower gross profit also resulted in a 6% decrease in the EBITDA. Investors may also note that the cost reductions lagged the activity decreases that began in March, and therefore, can adversely affect the Q2 profit margin. You may recall that I already discussed in my previous article about the higher-margin specialized rental business, and the company's efforts to position itself as a premium provider for bundled solutions.

Investors should note that during Q4 2019, SOI recognized deferred revenue of $17.6 million following the contract termination at the Kingfisher transload facility. In Q1 2020, it recorded $38 million in impairment charges related to the write-off of the Kingfisher facility. However, the company disclosed that it recouped the entire investment in the facility through the cash consideration for the contract termination and the cumulative earnings contribution.

In late 2019, the company had six chemical systems waiting in the wings. The company was expecting to realize the revenue from the new systems in 2020. However, during Q1 2020, the demand has reduced to a considerable extent. It ran two chemical systems during Q1, while none is expected to run in Q2. The company is looking for alternative uses for these systems, including intermediary storage for chemicals with these systems.

SOI's has no debt, which puts it in a significant advantage over some of its leveraged peers, especially in times when the oilfield service companies' falling earnings may make debt servicing difficult. As of March 31, 2020, its liquidity was $96 million, including $46 million in cash and $50 million under the revolving credit facility.

SOI's cash flow from operations (or CFO) decreased by 49% in Q1 2020 compared to a year ago. However, in Q1 2020, its capex nearly fell to zero following the drop in the manufacturing rate of new proppant systems, which resulted in a higher FCF in Q1.

It has also lower revised its FY2020 capex budget down to $10 million, which would be a significant reduction compared to FY2019. Lower capex can improve FCF in FY2020. Despite more moderate completions activity, we can expect the CFO to grow because the company's management is showing improving working capital management skills. It plans to use the FCF in making shareholder returns through dividend payment. 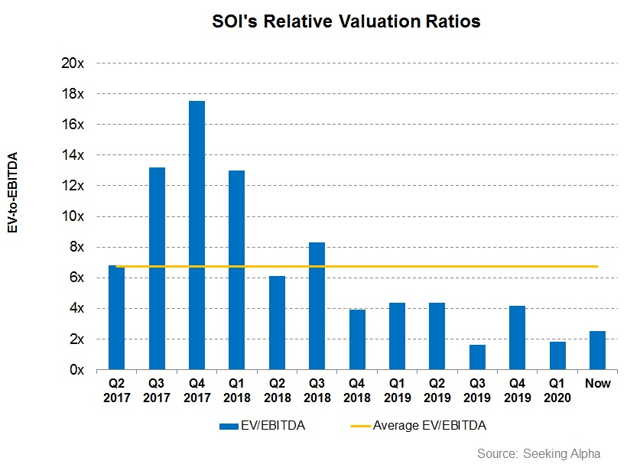 SOI is currently trading at an EV-to-adjusted EBITDA multiple of 2.5x. Based on sell-side analysts' estimates, the forward EV/EBITDA multiple is higher, which implies significantly lower EBITDA in the next four quarters. The stock is currently trading at a steep discount to its average (6.7x) between Q2 2017 and now. I have used estimates provided by Seeking Alpha in this analysis.

According to data provided by Seeking Alpha, eight sell-side analysts rated SOI a "buy" in May 2020 (includes "very bullish"), while five recommended a "hold." None recommended a "sell." The consensus target price is $8.27, which at the current price, yields ~19% returns.

What's The Take On SOI?

Solaris's proppant and chemical systems performance were already under pressure due to a decline in active hydraulic fracturing and completions activities when the pandemic hit the market. Now, the situation has turned grimmer as the fracking activity is due for a steep fall in Q2, and may not recover soon. As a result, the company's proppant management system fleet utilization can significantly suffer in the coming months, leading to a drop in the top-line and profitability. Plus, the utilization of the chemical management system fleet has turned nil, delving further blow to its short-term prospect.

To beat the slowdown, SOI is integrating the Last Mile trucking with the well site rental equipment. Also, it seems, its small-pack silos will gain market share in the current scenario. The company will reduce capex in FY2020 to improve free cash flow further. So far, it has held on to the increased dividend payout on the back of a healthy balance sheet. I do not think there are enough tailwinds to press the stock price upward in the short-term.