You Can't Always Trend When You Want

Time-series momentum, or trend following, is a long-established investing strategy that has attracted significant research. For example, the 2017 study "A Century of Evidence on Trend-Following Investing," by Brian Hurst, Yao Hua Ooi and Lasse Pedersen, analyzed the performance of one-month, three-month and 12-month time-series momentum strategies for 67 markets across four major asset classes (29 commodities, 11 equity indices, 15 bond markets and 12 currency pairs) from January 1880 to December 2016 and found:

Performance was remarkably consistent over an extended time horizon, one that included the Great Depression, multiple recessions and expansions, multiple wars, stagflation, the global financial crisis of 2008, and periods of rising and falling interest rates.

•Annualized gross returns were 18.0 percent over the full period, with net returns (after fees) of 11.0 percent, higher than the return for equities but with approximately half the volatility (an annual standard deviation of 9.7 percent).

•Net returns were positive in every decade, with the lowest net return, at 4.1 percent, coming in the period beginning 1919.

The authors noted that trend following has done particularly well in extreme up or down years for the stock market, including the most recent global financial crisis of 2008. In fact, they found that during the 10 largest drawdowns experienced by the traditional 60 percent stocks/40 percent bonds portfolio over the past 135 years, the time-series momentum strategy experienced positive returns in eight of these stress periods and delivered significant positive returns during a number of these events. They also noted that trend has worked because the average peak-to-trough drawdown length of the 10 largest drawdowns of a 60 /40 portfolio between 1880 and 2016 was approximately 15 months. 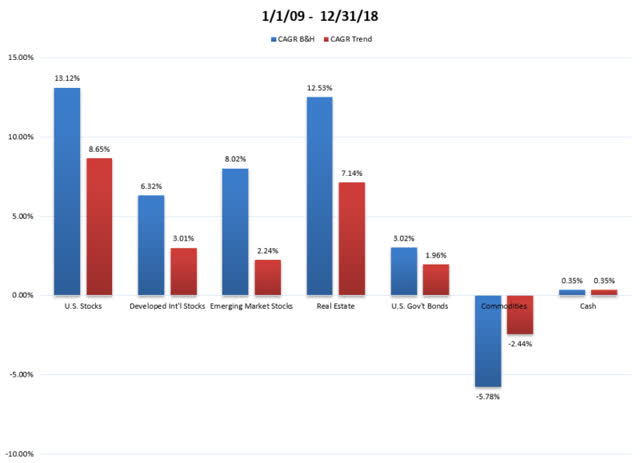 Vogel also showed that trend following did not provide much help with drawdowns over this period. 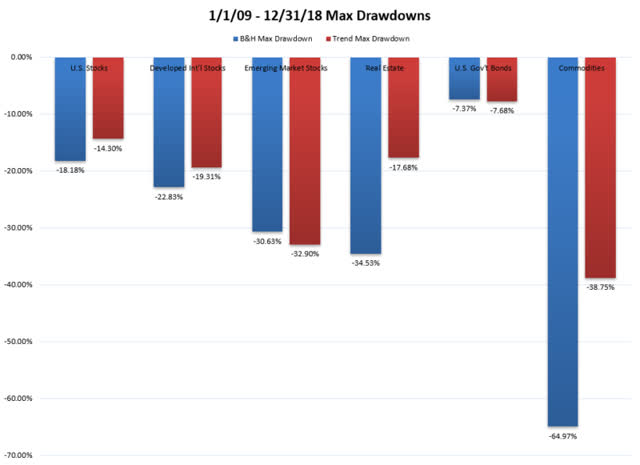 The poor performance over the period since 2009 has led many to question whether the strategy's efficacy has changed and to try to understand what factors explain the divergence in recent performance and long-term results. Abhilash Babu, Brendan Hoffman, Ari Levine, Yao Hua Ooi, Sarah Schroeder and Erik Stamelos sought to answer these questions in their study "You Can't Always Trend When You Want," published in the March 2020 issue of the Journal of Portfolio Management.

Babu, Hoffman, Levine, Ooi, Schroeder and Stamelos identified and examined three main factors that explain excess returns to a trend-following strategy: (1) the magnitude of market moves; (2) the trend efficacy, or the strategy's ability to translate a given market move into profits; and (3) the degree of diversification within a trend-following portfolio. Their data sample was the same described above from the 2017 study "A Century of Evidence on Trend-Following Investing," updating the data through 2018.

Positions were sized according to their expected volatilities such that each market in the portfolio had the same risk ex-ante, both to maintain diversification across markets with different volatility profiles and to limit the amount of concentration risk. Positions were scaled in aggregate such that the portfolio maintained a 10 percent ex-ante annualized volatility target, ensuring the portfolio targeted a consistent level of risk over time, even while the number of markets available and the correlations between them varied. At each rebalance, the portfolio was constructed using the full set of assets for which data were available. Estimates of transaction costs were included. Following is a summary of their findings:

There is a clear historical positive relationship between the absolute magnitude of moves in individual markets and the risk-adjusted returns of a hypothetical trend-following strategy. Trend following has historically been able to translate large moves in markets into positive risk-adjusted returns. Trend following historically realized losses in markets that exhibited little to no direction. Trend performance improves as risk-adjusted directional moves in markets increase, but there is some loss due to dynamic positioning. Trend efficacy has not been impaired. Recent underperformance has been due to the relative reduction in the magnitude of moves over the period 2010-2018.

The authors concluded: "Our findings suggest that the lower returns in recent years are due to fewer large moves across markets and are not explained by a decline in the strategy's ability to profit from market moves or by a reduction in diversification across trends in the portfolio. The fact that trend-following strategies continue to translate market moves into profits in a diversified manner suggests that trend-following investing may see stronger performance in market environments characterized by more pronounced movements going forward."

Before concluding, we need to cover one more important point: how adding even one year of performance to the evaluation periods can make a huge difference.

Don't be Blinded by Recency

In his aforementioned paper on the poor performance of trend over the decade 2009-2018, Jack Vogel showed how including 2008 greatly altered the picture. As you can see, trend greatly reduced the maximum drawdowns over the period 2008-2018, an important feature for risk-averse investors and those concerned about sequence risk (such as those in or approaching retirement). 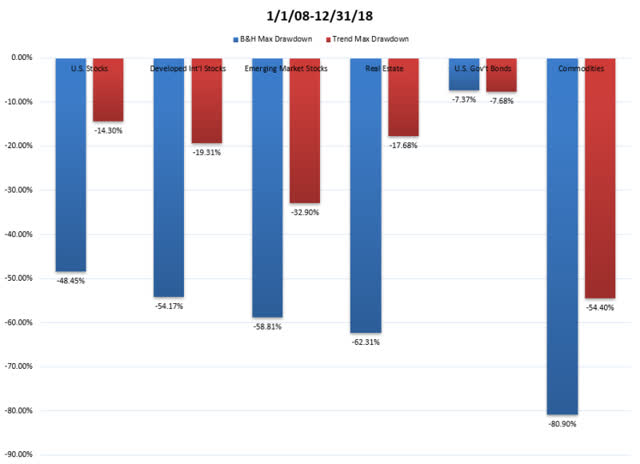 The table above highlights the fact that trend following has historically reduced drawdowns, but it comes with the "price" of knowing that there is a downside-you will inevitably miss out on returns at some times, often very long periods. In other words, investors should consider trend like an insurance policy-while it can protect you from extended bear markets, the price is that trend will tend to act as a drag on returns over periods, perhaps long ones, without extended bear markets. Keep in mind that, as with other forms of insurance, we should not complain when the "premium" is wasted because the risks did not appear.

As an investment style, trend following has existed for a long time. As to whether we should expect trend to persist, the evidence presented suggests that there has not been a regime change that has caused trend to cease to exist. Among the likely candidates for why we should expect trend to persist are investors' behavioral biases, such as anchoring, herding, the disposition effect and confirmation bias; and market frictions, hedging demands and market interventions by central banks and governments. For example, when central banks intervene to reduce currency and interest-rate volatility, they slow down the rate at which information is incorporated into prices, thus creating trends.

Larry Swedroe
3.21K Followers
Larry Swedroe is chief research office for Buckingham Wealth Partners,  a Registered Investment Advisor firm in St. Louis, Mo.. Previously, Larry was vice chairman of Prudential Home Mortgage. Larry holds an MBA in finance and investment from NYU, and a bachelor’s degree in finance from Baruch College. To help inform investors about the passive investment approach, he was among the first authors to publish a book that explained passive investing in layman’s terms — The Only Guide to a Winning Investment Strategy You'll Ever Need (1998 and 2005). He has authored seven more books: What Wall Street Doesn't Want You to Know (2001), Rational Investing in Irrational Times (2002), The Successful Investor Today (2003), Wise Investing Made Simple (2007), Wise Investing Made Simpler (2010), The Quest for Alpha (2011), and Think, Act, and Invest Like Warren Buffett (2012). He also co-authored eight books: The Only Guide to a Winning Bond Strategy You’ll Ever Need (2006, with Joe Hempen), The Only Guide to Alternative Investments You’ll Ever Need (2008, with Jared Kizer) and The Only Guide You’ll Ever Need for the Right Financial Plan (2010, with Tiya Lim and Kevin Grogan), Investment Mistakes Even Smart Investors Make (2011, with RC Balaban), The Incredible Shrinking Alpha (2015 and 2020 with Andrew Berkin) Reducing the Risk of Black Swans (2013 and 2018 with Kevin Grogan), Your Complete Guide to a Successful and Secure Retirement (2018 and 2020 with Kevin Grogan), and Your Essential Guide to Sustainable Investing (2022 with Sam Adams). He writes for AdvisorPerspectives.com, AlphaArchitect.com, and TheEvidenceBasedInvestor.com. You can follow him on Twitter  (http://twitter.com/larryswedroe).
Follow