Equities ended the week mixed although the last two days were fairly weak, ending on a dour note. There's clearly a tug of war going on as investors weigh positive news on the virus (especially surrounding remdesivir) against very poor economic news. Friday's weak market is being attributed to a possible restart to US-China trade friction.

Obviously, the lock-downs that are now two months old have taken a heavy toll on the economy. As each state (and in some cases like Colorado - at the county level) make their own decisions on re-opening, pressure is mounting as jobless claims climb.

The S&P 500 was down slightly on the week, but small caps significantly outperformed though were up much more earlier in the week. I highlighted just how undervalued small caps were in the month - at least compared to most other benchmarks. There's a small opportunity there. I like the Virtus KAR Small Gap Growth Fund (PXSGX), but it's currently closed. Some brokerages will let you sneak in. Another option is the Vanguard Small Cap Growth ETF (VBK). 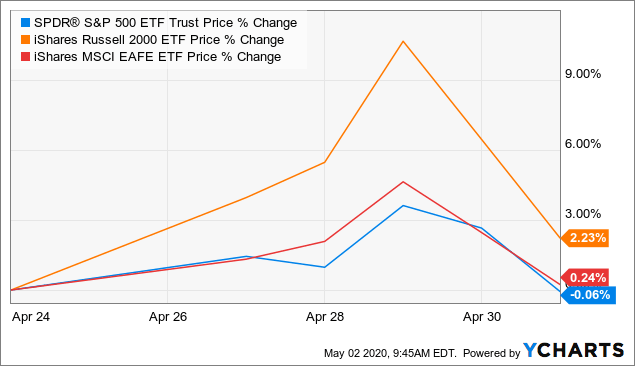 Bonds on the week were little changed, but high yield did OK, up nearly 1%. Investment grade was fairly weak as there was a significant amount of new issuance and investors also took some profits. Munis were flat as the market appears to be stabilizing after another bout of selling by investors earlier in the week due to the fear of state and municipal bankruptcies.

Interest rates were again little changed but mostly higher on the week. The Fed had its FOMC meeting last week and left rates unchanged as highly expected.

The bond market has done a lot of healing, especially in the non-investment-grade segment thanks to the Fed stating that it would be a buyer to promote liquidity and providing a primary market (new issues). In fact, it appears that the Fed hasn't bought a single corporate bond yet. Here's a tweet from Gundlach about it:

The balance sheet also is starting to level off. In the last week, total assets on the Fed's balance sheet rose by only $83B, ending at a total of $6.66T. That's down 86% from the peak week of March 25. The Fed is loading up on the balance sheet in the initial weeks and then lightening up as things improve - just as it did in prior periods of QE. Mortgage-backed securities purchases fell on the week. 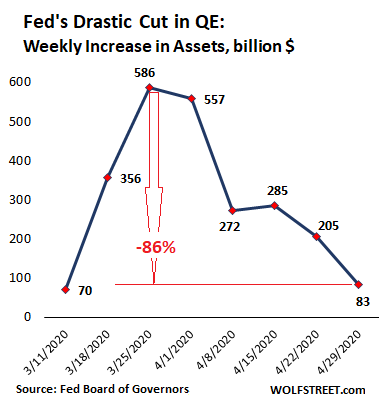 On Wednesday, the Fed reworked its Main Street Lending Program, expanding it to make it available to more companies while lowering the minimum loan size. It also made its Municipal Liquidity Facility available to a wider assortment of cities and counties. 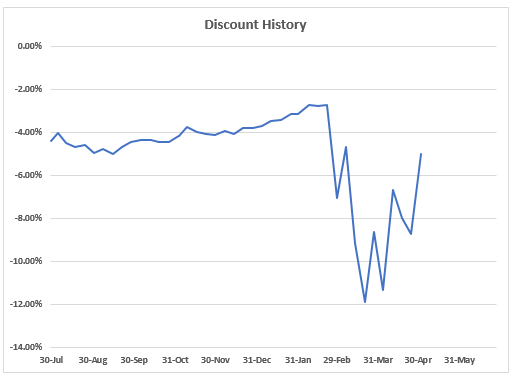 Discounts tightened up marginally on the week, but are still relatively wide compared to the last year. The best-performing sectors were in the dividend equity, emerging markets, and in US real estate. The worst were MLPs, energy, and healthcare.

From a valuation perspective, the preferreds and utilities spaces remain elevated while real estate and Asian equity are the cheapest.

The distribution notices came and went, and we avoided the potential minefield well. PIMCO and Nuveen avoided cuts while BlackRock didn't have any in the fixed income side. The brunt of the cuts this time came from Eaton Vance and primarily among its floating rate. All in, it was a good month.

We could see some nice buying, especially in PCI and PDI, as investors show angst about distribution stability is removed. Shares of PCI fell 4% while the NAV was up on the week by over 1%, resulting in over 5.2% of premium lost. The shares are now just over par. With the NAV slowly recovering and a 12.3% yield, expect this one to move higher on price during the week.

The other good opportunity that opened up in Core funds was in Invesco High Income 2024 (IHTA). The fund did not cut the distribution and the price had sold off this week likely in anticipation of that occurring. The discount widened by over 5.2% this week alone and now trades over a -10% discount for a fund that liquidates near NAV in 3.5 years.

Lastly, for floating rate exposure, check out Blackstone/GSO Long-Short Credit (BGX) trading at an 11.9%-plus discount and yielding over 12.2%. Remember this fund sponsor adjusts the distribution every three months based on net investment income production. We are due in a few weeks for the next announcement. Hard to say whether the adjustment will be up or down, but it will likely be minor. The fund has limited exposure to energy where the bulk of loans that have defaulted have occurred.

Nuveen Real Estate Income (JRS) also is on sale, but you have to be OK with the volatility of the REIT space. This fund is one I did add to on Friday as the discount widened out more (to over 18%) until the NAV adjusted lower that evening. The fund is more than half of the preferred stock of REITs which reduces the volatility of the NAV of the fund.

The list in the Core bottom 5 z-score is looking fairly attractive at the moment and an area I will be watching this week.

The All CEFs list has a bunch of target terms on it. In addition to those mentioned above, Nuveen High Income (JHAA) lost 6% of its premium but remains overvalued at a 4.4% premium. On the premium change side, the top four Tortoise funds look out of whack because they had reverse stock splits and the sheet can't account for that. Most of the top movers (more expensive funds) are MLPs, but there's also Reaves Utility Income (UTG) which added 5.7% in valuation and went to a modest premium of 3.8%.

Not much else looks attractive.

Looking at the Core, there are some swapping opportunities here. The first I mentioned on the chat last week.

In taxable munis, Nuveen Taxable Muni Income (NBB) is slightly expensive compared to BlackRock Taxable Muni (BBN). For those so inclined, you may want to make a swap though this one isn't as compelling.

I nibbled on Site Centers Corp (SITC.PK) on Friday at $19.39, near the close, after it reported decent earnings and a large cash position. While this is a retail center operator being hit from the economic shutdown, it still reported $0.15 per share earnings an $0.32 FFO per share. In mid-2018 it completed their spin-off of RVI (when it was still called DDR Corp) which was its second tier properties.

The company noted that 50% of its April billed rents were paid. It expects 77% of deferred rent to be repaid in 2020 as more operations get re-opened.

The good thing about its properties is they are mostly anchored by grocery stores, which are still open. They account for 61% of the annual base rent with just 11% accounting for by movie theaters, fitness, and local restaurants (which are closed).

The common stock had its dividend suspended (which is good for the preferreds) with plenty of liquidity to last until things open up. As of March 31, it had $839M of cash and an untapped credit line. It has no significant debt maturities for the next two years. Preferred share expense is just 7.4% of NOI.

In the new preferreds sheet, I have a target "buy" yield of 8.50% for the K-series. I bought a little below that at 8.15% based on the good earnings. The yield-to-worst is over 22% on the "Ks" for BB rated securities.

Other speculative preferreds to look at is Brookfield Property REIT (NASDAQ:BPYUP) which is yielding 10.5% and above my 10% yield target. Obviously, this is more retail exposure and this can be a dangerous space to operate. 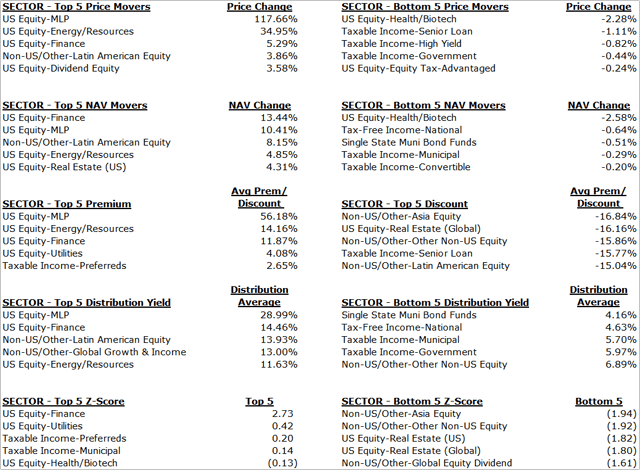 Weekly analysis of ALL CEFS:

Disclosure: I am/we are long CORE PORTFOLIO AND TRADES MADE. I wrote this article myself, and it expresses my own opinions. I am not receiving compensation for it (other than from Seeking Alpha). I have no business relationship with any company whose stock is mentioned in this article.