Over the past 6 months, shareholders in the VelocityShares 3x Long Natural Gas ETN (UGAZ) have taken a hit of nearly 90% on a historic tumble in the price of gas. While the past few months have seen fairly consistent selling in natural gas, I believe that we have fundamentally reached a turning point and that now is a good time to buy the commodity.

When it comes to understanding the seasonal movements in natural gas, one of the clearest metrics available is to simply take a look at the seasonal changes in inventories. Fundamental natural gas traders have a key benefit which differentiates this commodity from many of the other energy commodities: the overall level of inventories is fairly repetitive and predictable through time. 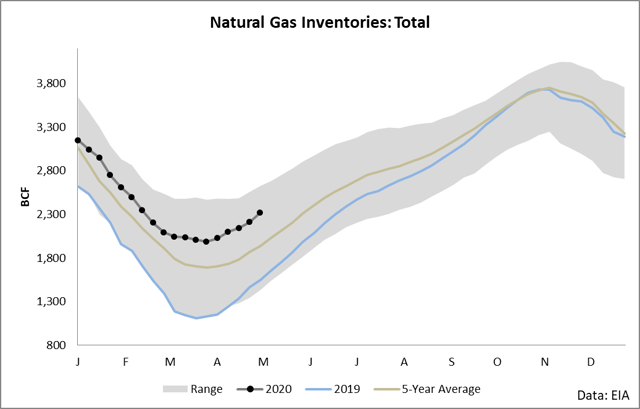 As you can see in the above chart, there is a very clear seasonal pattern at work within natural gas fundamentals which leads to a clear season of builds and draws in the inventories. In fact, as we’ll discuss in a bit, natural gas fundamentals are so regular and cyclical when viewed on these timeframes that we can construct trade ideas around both patterns in the data as well as slight departures from the seasonal norms.

The underlying driver causing this pattern of builds and draws is quite simple: natural gas demand varies between two main sources and each of these demand sources occur during differing times of the year. During the winter, much demand for natural gas comes in the form of home heating. 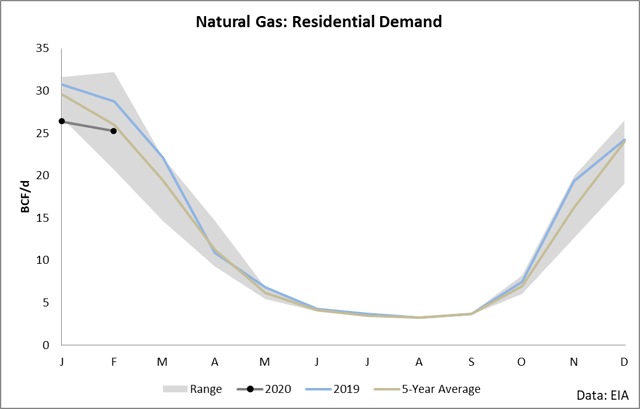 And during the summer, the swing variable in demand is primarily cooling demand reflected through to higher electric power burn of gas. 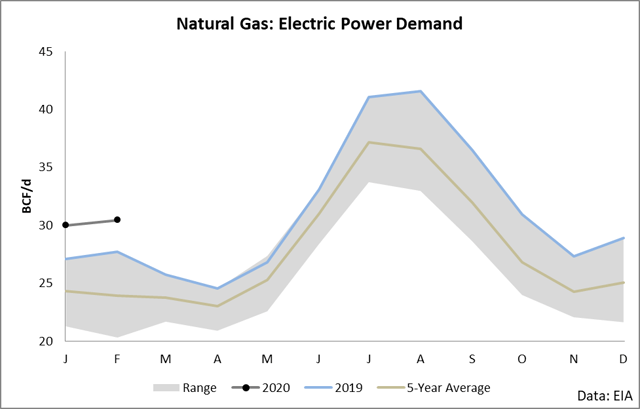 As time progresses, this share of electric generation has been growing due the mass coal-to-gas switching seen over the past few decades. For example, here is the total amount of coal used in power generation over the past 30 years. 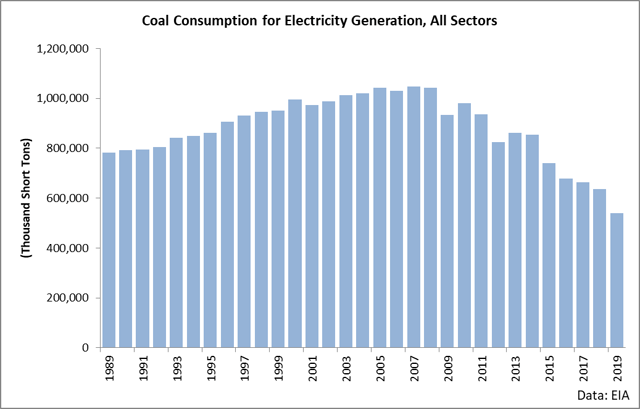 And here is the total amount of natural gas used in generation by year – as you can see, natural gas has greatly supplanted coal. 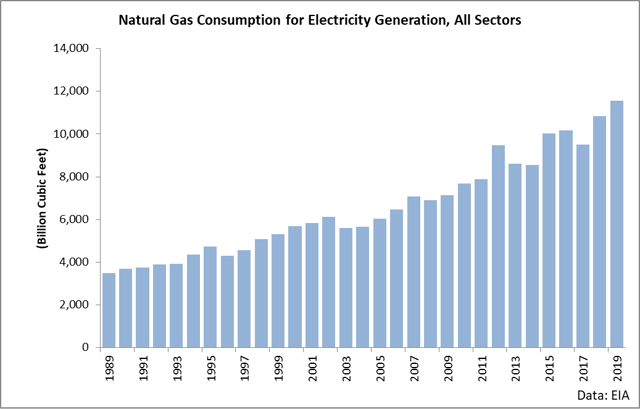 It may seem like these last few charts were a bit meandering, but there’s a point here. As time has progressed, a greater share of summer demand for power has been in the form of electricity. For example, if you rewind to the electric demand chart, you’ll see that last year witnessed the monthly consumption of natural gas set the 5-year high in every single month. What this basically means is that as time progresses, we need to be putting a greater focus on understanding the weather during the summer to track natural gas demand.

An excellent resource for doing so on a short-term basis is the NOAA 6-10 Day Outlook which shows that most of the contiguous United States is expecting above-normal temperatures over the next 6-10 days. 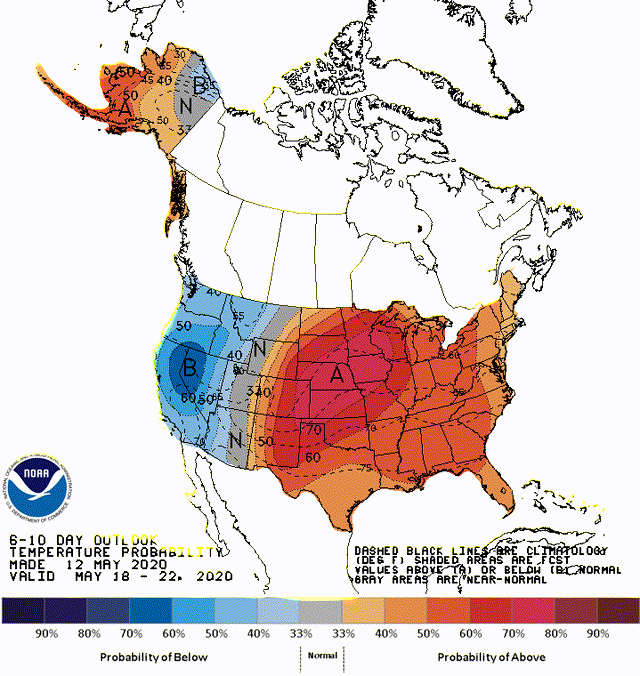 If you go back to the first chart of the 5-year range of inventories, an important detail to note is that natural gas inventories tend to climb throughout the summer, despite electric demand for cooling. However, this doesn’t mean that just because inventories are climbing fundamentals are bearish. It’s important to normalize inventories against something like the 5-year average for that specific week or display inventories as a year-over-year change.

In the below chart, I graphed the year-over-year change in natural gas inventories as well as the Henry Hub NYMEX price. I have also drawn a few lines to show historic turning points in fundamentals as defined by comparable rises. I’ll give my commentary and take in the next paragraph. 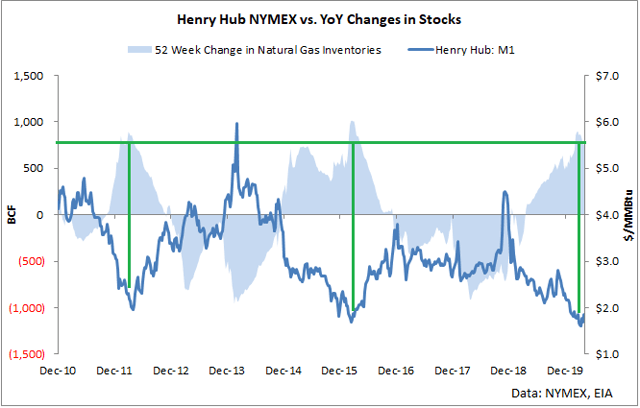 Again, one of the key benefits which natural gas fundamental traders have that other energy commodity traders don’t have is that natural gas fundamentals are fairly predictable when taken from a longer-term standpoint. For example, over the past decade, we have only seen a year-over-year rise of 750 BCF three times. And we are currently in the third of these occasions.

This might seem like arbitrary analysis based on a random line drawn on a chart – but there is a key fundamental tie-in here. First off, there’s a clear correlation between the change in inventories on a year-over-year basis and the change in natural gas. 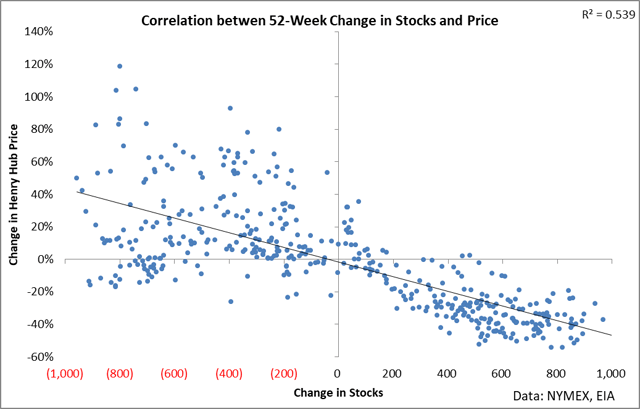 What this chart essentially conveys is that as inventories rise on a year-over-year basis, the price of gas falls. No real rocket science here.

But the fundamental tie-in between price and inventories is that given that price has been collapsing, drilling activity has collapsed as well. 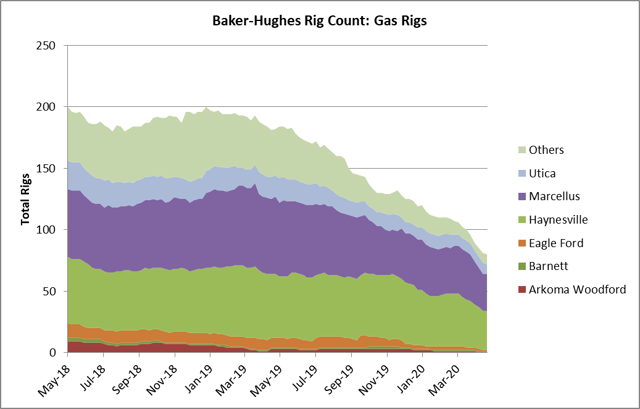 Where this essentially places us is the point at which we are entering above-average temperatures on the back of weaker production. In other words, there’s a strong recipe for inventories to start contracting on a year-over-year basis which is directly correlated with changes in the price of natural gas.

This is the key theme around which I am suggesting that investors trade UGAZ. Natural gas fundamentals are at a major seasonal inflection point and the broad-based trends in gas inventories allow us to construct repeatable trading ideas at these moments. We have a short-term catalyst in the form of declining rig count coupled with an expectation for immediate above-normal demand increases. When these variables are combined, it leaves me fairly bullish natural gas and I believe UGAZ is a strong way to play the move.

Prior to leaving this article, we have to say a bit about UGAZ’s methodology. First off, UGAZ is a triple-leveraged ETN so all of the usual risk statements apply. Only trade with what you can afford to lose and understand that natural gas is already quite volatile, so when you put on a leveraged position the fluctuations can be strong – so size your risk accordingly.

And the second thing to note here is the roll-yield factors at work. UGAZ is pretty straightforward: it gives the return of holding a position in the front month contract and then rolling this contract into the second month as time nears expiry.

The problem here is that natural gas has been in contango in 82% of all weeks for the past decade. The issue with contango is that futures prices converge towards the spot price as time progresses. What this basically means is that when the futures curve is in contango, futures prices are above spot prices and they will be declining in value during a typical month in relation to the spot price. This essentially boils down to a small (but noticeable) lag in performance between the outright price of natural gas and an instrument which is tracking the market by holding futures through time. If you’d like to see a more in-depth explanation about this, see my article on UNL.

Ultimately, UGAZ is a strong instrument for taking leveraged trades on natural gas when gas is likely to make a strong directional move. I believe that the fundamentals are setting up for a bullish few months which makes UGAZ a good trade at this time. Roll yield and leverage are important factors to monitor, so manage your risk accordingly.

Natural gas fundamentals are cyclical and fairly predictable when viewed from a macro perspective. A cyclical trading opportunity is emerging in which inventories are correcting downwards which will likely lead to higher prices. UGAZ is a leveraged instrument which is exposed to roll yield, so manage your risk accordingly.