While energy companies beat Wall Street expectations, the outlook for growth remains very challenged. According to I/B/E/S data from Refinitiv, year-over-year earnings growth for the energy sector for 20Q1-20Q4 is expected to decline 30.5%, 154.9%, 127.3%, and 110.9% in each quarter, respectively.

It is also worth mentioning that in 20Q1, the price of WTI hovered above $40 a barrel for the first two months of the quarter, which will soften the true impact on quarterly results. However, the relatively higher oil price during this period allowed for companies to engage in hedging activity to help minimize the impact of low oil prices.

Looking at company transcripts, EOG Resources (EOG) commented, "we now have hedged more than 95% of our second quarter oil production at an average price of $48 and more than 50% of our third quarter production at $47." Devon Energy noted, "we have also taken steps to protect about half of our expected oil volumes for the first half of 2021 at prices are nearly $40 per barrel." Noble Energy (NBL) stated, "second half is also well protected with a combination of both fixed price swaps and three-way collars between $30 and $40 per barrel WTI." Finally, Marathon Oil Corp. (MRO) stated that near-term production will be hedged at over $30 per barrel (Source: Earnings Call).

The most meaningful trend this quarter was the significant decline in capital budgets across exploration and production companies who are reacting to the new environment of weak demand. Exhibit 2 highlights a decline in YoY capital expenditures growth in 20Q1-20Q4 of 3.8%, 31.5%, 40.3%, and 45.1%, respectively. 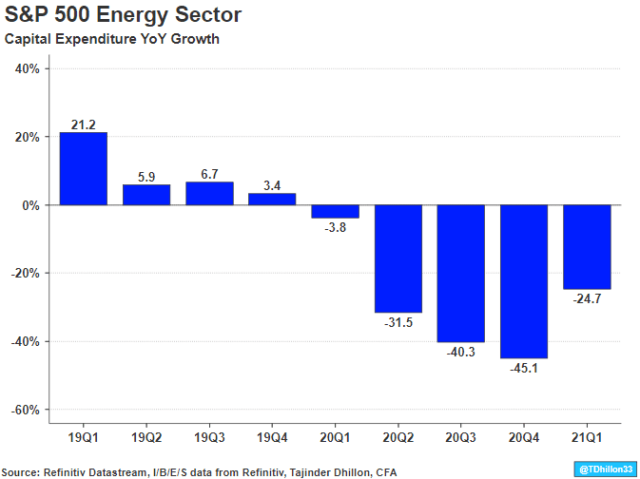 To help with current costs, companies also mentioned a significant decline in current drilling activity as represented by how many rigs are in operation. The oil rig count continues to decline, falling by 53 in the latest report to 325 rigs, which is at a four-year low.

Wells are also being curtailed or shut-in completely to adapt to a new pricing environment. Exxon Mobil commented that "production will be lower in the second quarter due to economic shut-ins and market-related curtailments. At this time, the estimated second quarter impact is 400,000 oil equivalent barrels per day." Chevron stated, "in May, we expect to curtail between 200,000 and 300,000 barrels of oil equivalent production, and we expect curtailments to continue in June." (Source: Earnings call). 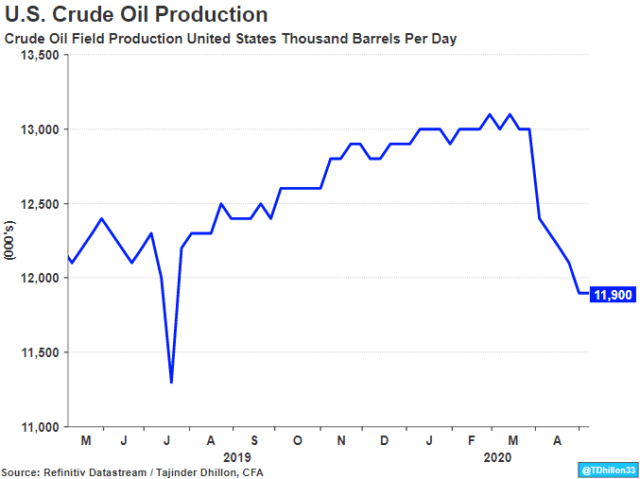 Liquidity was also a hot topic during calls where companies defended their liquidity position, including how much cash is on hand, available credit through lending facilities, and upcoming debt obligations. To help improve liquidity, several companies cut or suspended dividends while curtailing share buybacks. Occidental Petroleum and Apache Corp. (APA) cut their dividend while Marathon Oil Corp. suspended its dividend and share-repurchasing program altogether. Chevron also suspended its share-repurchasing program but maintains its commitment to dividend payments.

Looking ahead, to monitor the balance sheet resiliency of a company in more detail, users could turn to the StarMine Smart Ratios Model. The Smart Ratios model systematically examines measures of a company's profitability, leverage, coverage, liquidity and the growth and stability of revenue, earnings and ROE. The model calculates the probability of default (PD%) over the next 12 months and maps that to a Model Implied Rating and to a 1-100 percentile rank, where low scores represent a higher PD%.

To view this page in Refinitiv Eikon, click on 'Smart Ratios Credit Risk' when looking at a company and define a custom basket of peers. Exhibit 4 highlights the challenging outlook for oil drillers - for example, lower interest coverage ratios and lower free cash flow/debt over the next 12 months, while return on tangible capital and net profit margins also decline.

Considering the doom and gloom surrounding the energy sector, Exxon did provide a glimpse of hope by indicating China oil demand appears to be stabilizing. "While it's still early days, there are some reasons to be cautiously optimistic as signs of demand and economic activity are beginning to pick up in China, with April sales in three of our key businesses back in line with and slightly above the same period last year. It's too early to tell if this initial rebound will be sustained or if it reflects the broader economy or if it is even relevant to other economies around the world, given the range of government responses and policies." (Source: Earnings call).

Lipper Alpha Insight
2.38K Followers
Lipper Alpha Insight (https://lipperalpha.refinitiv.com/) is a free daily news and commentary blog, giving financial professionals actionable ideas and insight to make sense of individual security news and events and stay on top of macroeconomic trends. We have a team of expert analysts that are constantly looking at the financial landscape in order to keep you up to date on the latest movements.